10 Best Things To Do In Evora, Portugal

Evora is one of the hidden gems of Portugal. This small provincial city is capital of the rural Alentejo region and is situated halfway between Lisbon and the Spanish border. Its history goes back over 7,000 years, and in its historic centre – a UNESCO World Heritage Site since 1986 – bears traces of its past as a Roman, then Moorish city, as well as its heyday as the residence of several Portuguese kings in the late Middle Ages.

There is such a wealth of things to do in Evora, but for much of the year, it’s very quiet, with the feel of a large country town. There are also some great places to stay in Evora, some of which are part of the ancient and historic fabric of the city. 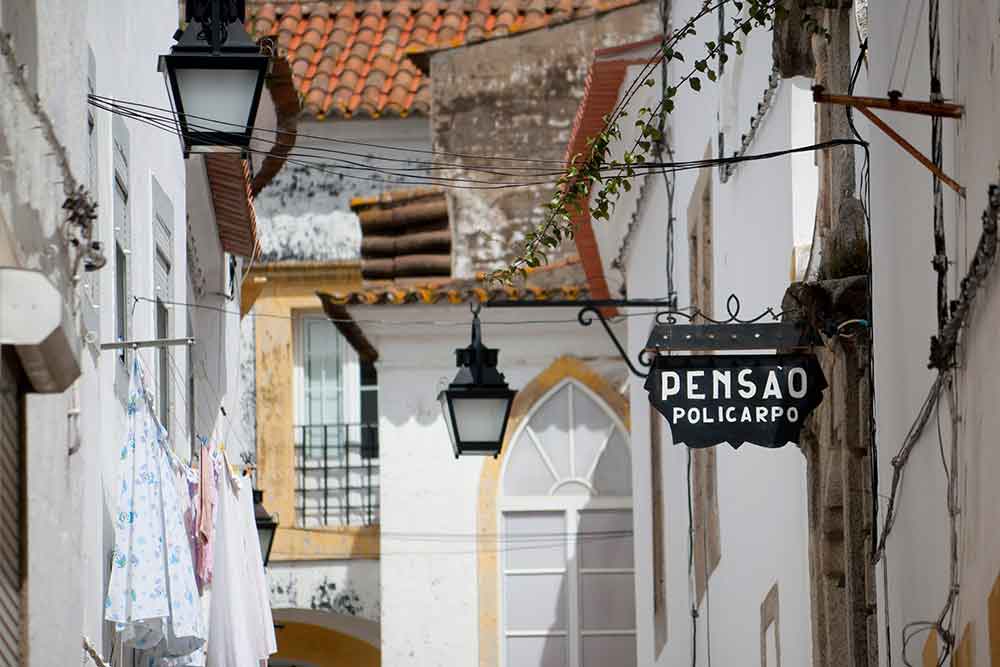 There are plenty of places to visit in Evora, all described below, but one of the greatest joys of visiting Evora is to wander the labyrinth of narrow streets without really heading anywhere specific.

Most of the old town of Evora is whitewashed, with some buildings also painted with yellow or blue borders.

Some of the streetscapes of Evora are stunning, old houses clustered tightly together with pointed Gothic arches linking one side with the other. Parts of the city’s medieval walls remain, especially on the western side of the city.

It’s also worth looking around the eastern side of the city, down the hill from the Cathedral, where you can sometimes visit parts of Evora’s university, and explore some of the quieter city squares, such as the Largo das Portas da Moura, with its view back to the cathedral. 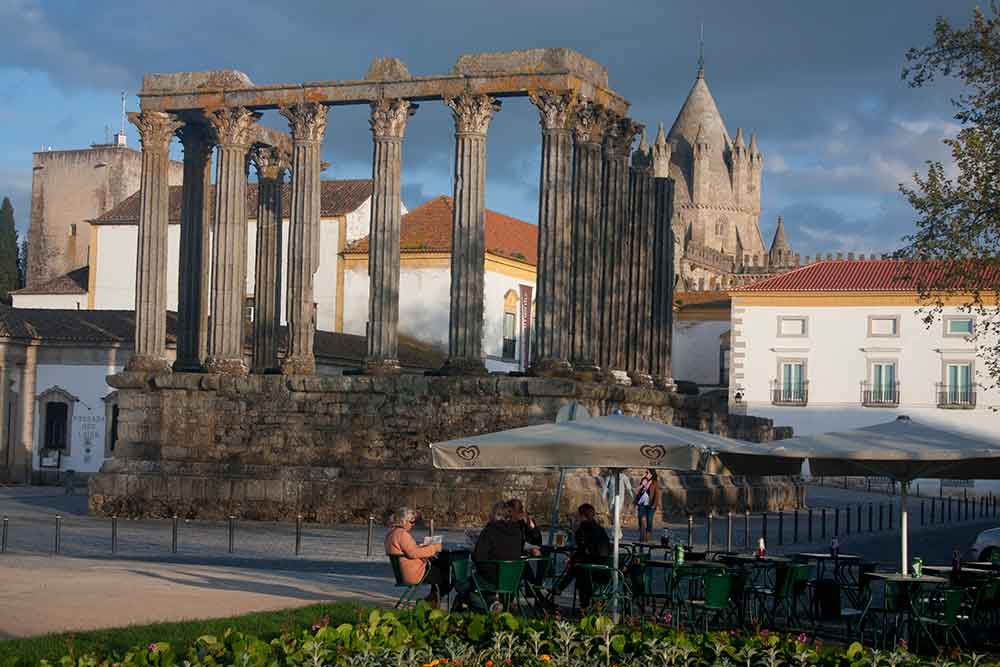 The Roman Temple ruins that dominate the square to the north of the Cathedral date back to the first or second century AD, and are one of the most complete ancient ruins on the Iberian peninsula. The square in which it was built was the Roman forum, and may have been dedicated to the first Roman emperor, Caesar Augustus. The dedication to Diana, the Roman goddess of hunting, came much later, probably isn’t correct, but the name seems to have stuck.

The story of its survival is very unconventional. A fortress, and later an abattoir, were built around it, almost hiding it in plain sight. Amazingly, this incorporation of it into other buildings may be what helped preserve the Temple so well – the carvings around the capitals are incredibly detailed. There’s a little kiosk on the corner of the park across the road from the Temple, a great spot to while away half an hour at the end of the day. 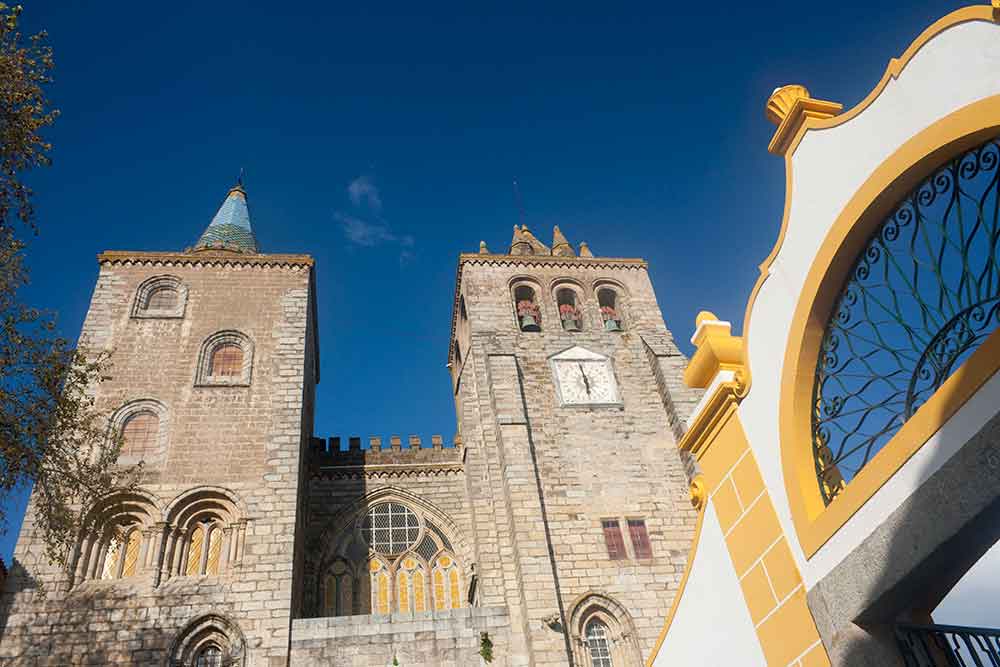 The Cathedral, or Sé, dominates the skyline of the ancient city of Evora, its quirky mismatch of three towers looming high above the rooftops of the city.

It was founded in 1186 and completed within half a century, but additions were made to the building throughout the Middle Ages and beyond. The central lantern tower is probably its most attractive and distinctive feature, but the whole cathedral is a showcase of Portuguese church architecture, with later Manueline and Baroque additions to the Romanesque and Gothic core.

It’s also well worth seeing the beautiful 14th century cloisters, and climbing the stairs in the corners to the walkway along the roof, which gives fine views over the city. 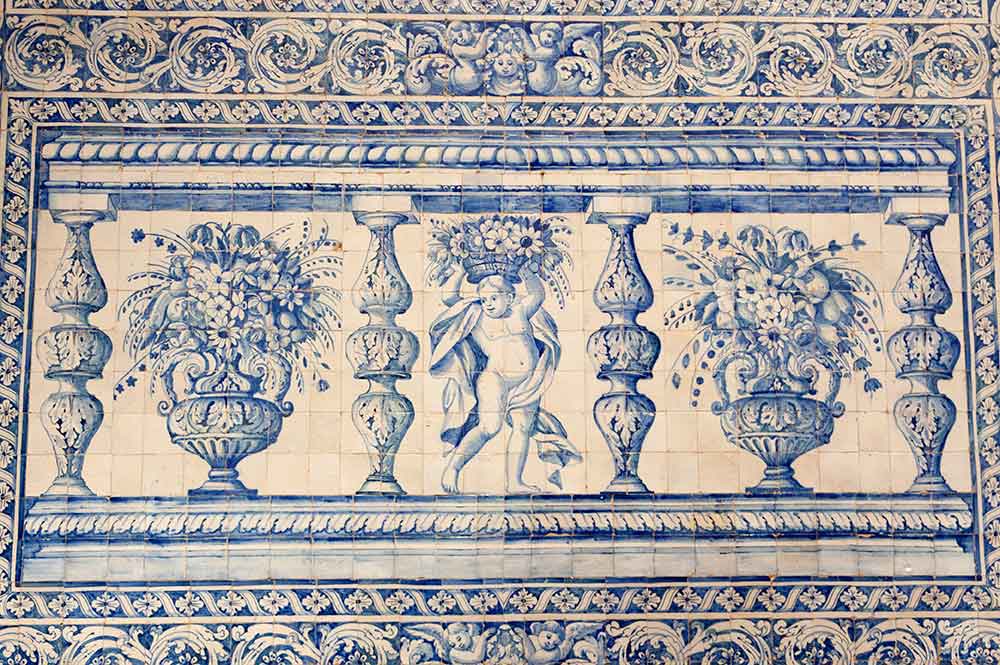 Also known as the Convento dos Loios, the church of Sao Joao Evangelista (St John the Evangelist) is one of Evora’s hidden gems.

It’s actually a private chapel to the Duques de Cadaval, whose palace is next door, part of which can be visited.

The plain white exterior gives no hint of what you’ll find inside. The walls of the interior of the church are decorated entirely in azulejos – traditional blue and white hand-painted ceramic tiles from the early 18th century. Some show traditional patterns and motifs such as leaves and flowers, while others depict Biblical scenes and episodes from the life of St Lourenco Justiniano, who founded the Loios monastic order. 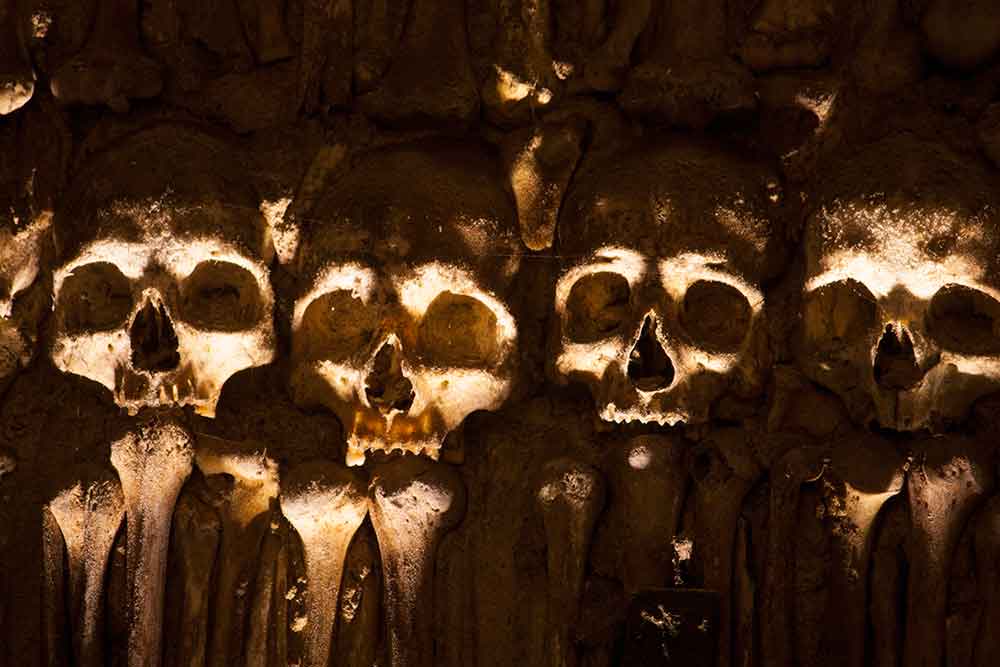 The Chapel of Bones – Capela dos Ossos in Portuguese – is probably Evora’s quirkiest attraction. It’s a chapel connected to the Church of Sao Francisco, in the south of the Old Town.

It is decorated pillar-to-pillar, wall-to-wall with the bones of monks. It was begun in the 16th century by a monk who wanted to remind others of the brief, transitory nature of life. The inscription above the chapel entrance translates as, “We bones who lie here await yours.”

The chapel is one of the most macabre sights you are ever likely to see. Every inch of space is covered with bones – a mixture of skulls, leg and arm bones. And for good measure, two desiccated corpses hang from the ceiling. It has been estimated that the bones of up to 5,000 people decorate the chapel.

As I said to my wife on the way out, “Cremation it is, then.” 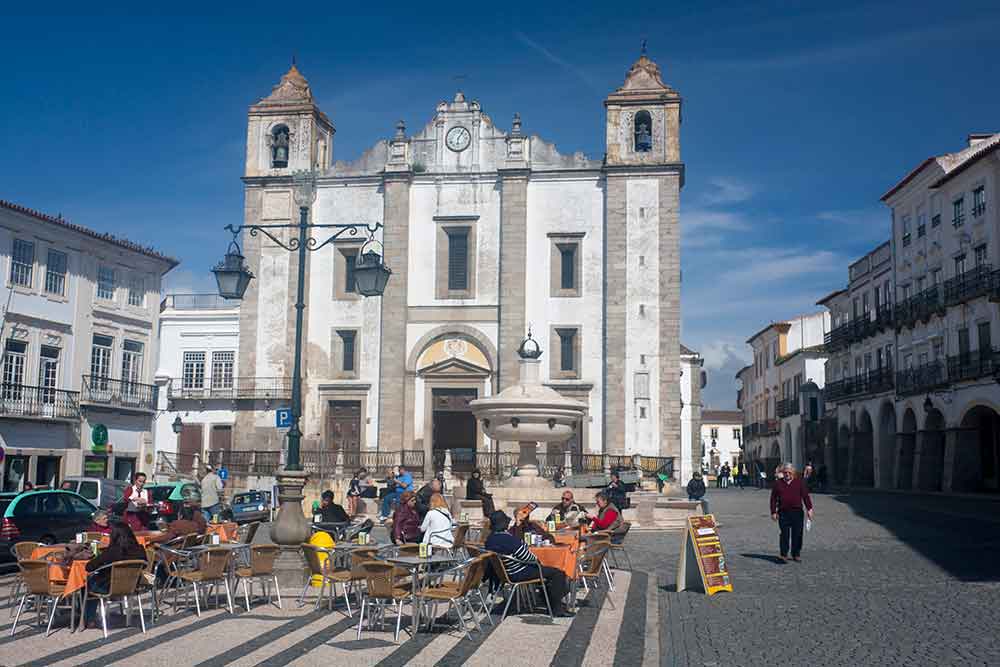 Evora’s busiest square is the Praça do Giraldo, named after the 12th century hero of the Reconquista Gerald the Fearless, who defeated the Moors and expelled them after 450 years of rule in the city.

During the Middle Ages, the square was used for public executions, most notably during the period of the Inquisition.

Nowadays it’s a pleasant place to while away some time at one of the cafes, and the 16th century Church of Santo Antao (St Andrew) at the northern end of the square. 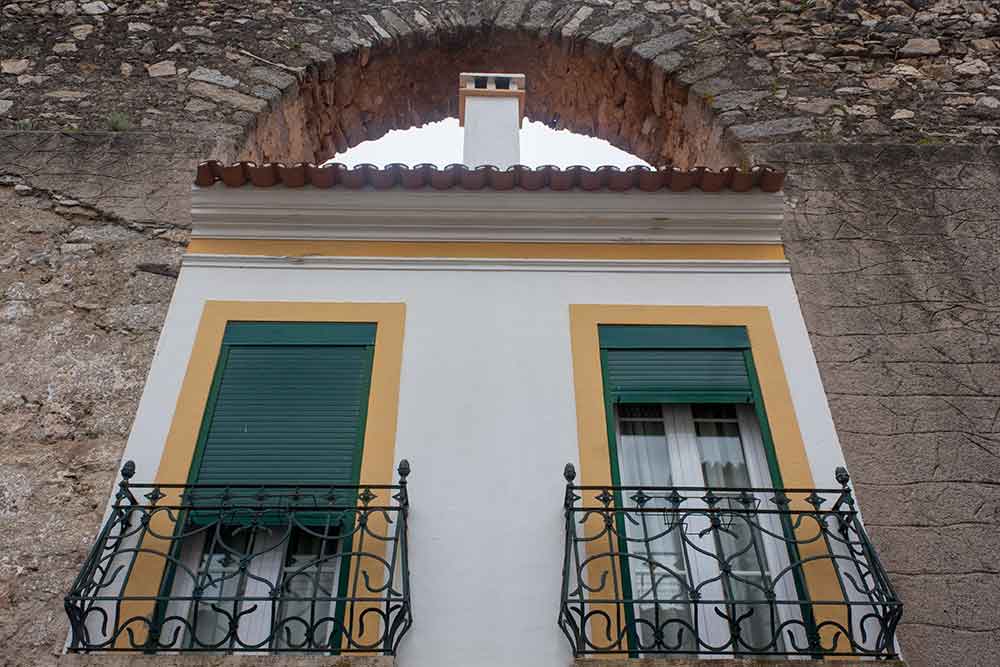 The Aqueduto da Prata was built between 1531 and 1537 by Francisco da Arruda, who was also responsible for the iconic Belem Tower in Lisbon, to provide water for the city of Evora.

The Aqueduct is 9 km long, and originally continued all the way to the Praça do Giraldo.

It’s still possible to walk a long section of it, along the atmospheric Rua do Cano in the north-west of the old city. The locals have made use of every possible space, building houses under arches of the Aqueduct. A few of these have been turned into cafes and restaurants. 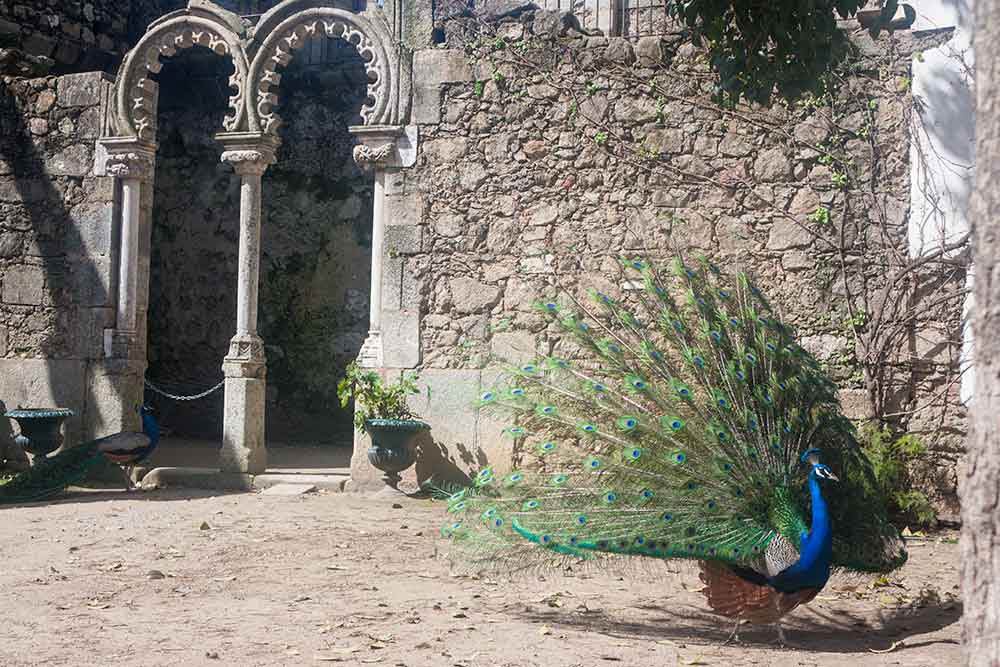 The Jardim Publico – public gardens – is by far the largest green space in Evora Old Town. It’s a short walk from the central market, where we stocked up on bread, cheese and chourico sausage for a wonderful picnic, and the Igreja de Sao Francisco and Chapel of Bones are also very close by, so if you need a bit of a lift after visiting the latter, or feel like a break from the cobbled streets, this is the perfect place to stop by for a while.

The gardens are a wonderful place to relax. The Palacio de Dom Manuel is in the grounds, as are some authentic-looking 19th century ‘fake ruins’ where peacocks preen and display their plumage, making far more impression on tourists than on the pea hens. There’s also a good kiosk and cafe serving great coffee. 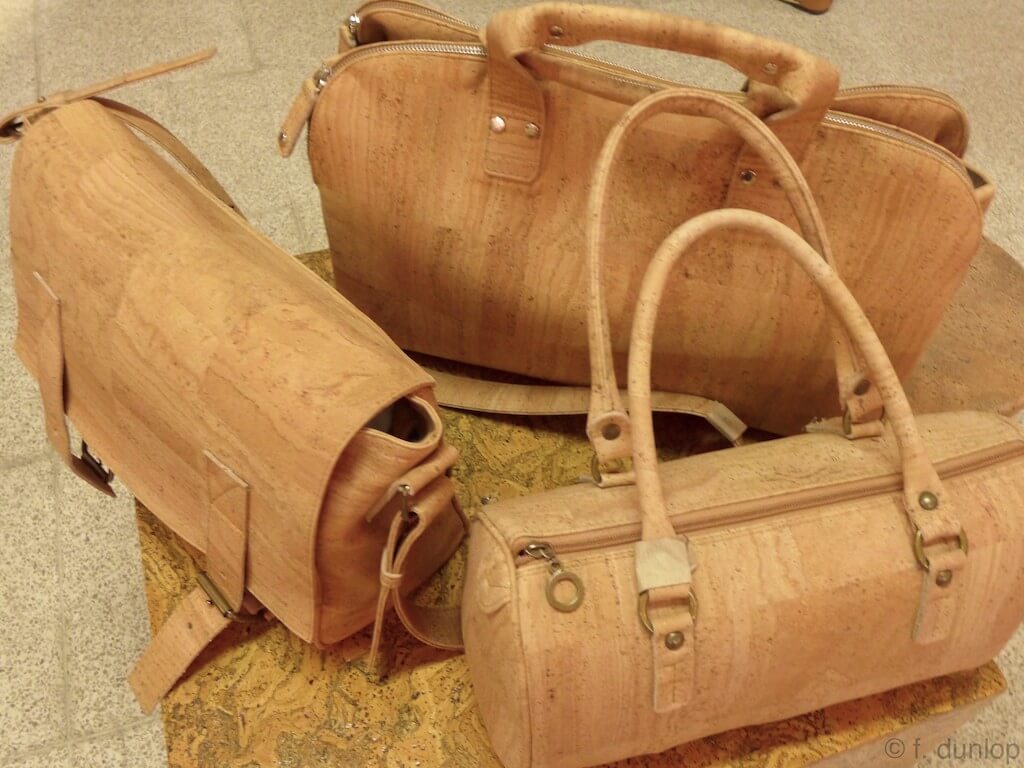 Wherever you travel in the world, you can expect to find a few souvenirs unique to the place you’re visiting. I had expected to pick up a bottle of local olive oil or wine to take back, but got quite a surprise – several shops in the centre of Evora have a large stock of souvenir items and gifts made from… cork.

If you drive anywhere in the Alentejo region – which borders Spain to the east and the Algarve to the south – you’ll see gentle rolling fields and small copses of cork trees. The region is the world’s biggest producer of cork, but it’s put to many uses beyond the traditional bottle-stop. You can buy yourself a cork hat, a cork belt or cork handbag. We settled for a cork mouse which serves as our SD card storage pouch. 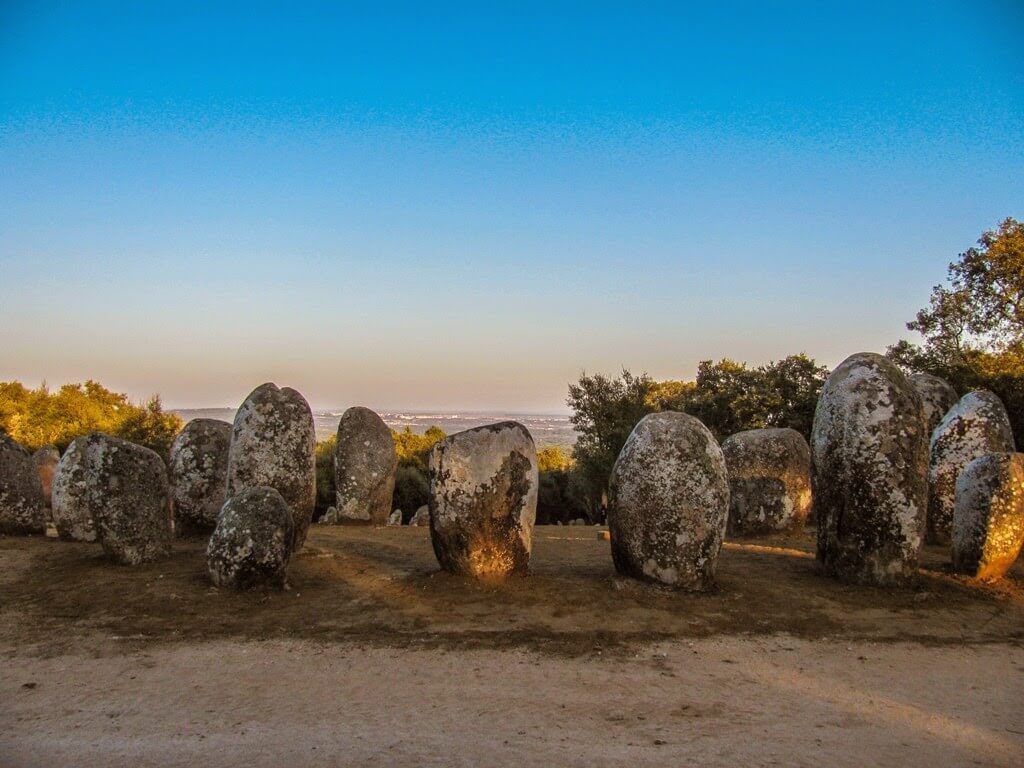 Portugal’s best-known prehistoric monument, the Cromleque dos Almendres, is a short drive from the centre of Evora. It’s near the village of Nossa Senhora de Guadelupe, off the N114 road that heads west towards Montemor-o-Novo.

The Cromleque is a fascinating sight, the remains of up to three stone circles, the earliest of which were in place over 7,000 years ago. The stones are mainly short and rounded, some decorated with ancient engravings.

David Angel is a professional photographer and writer, originally from Wales in the UK, and currently living in New South Wales, Australia. He has travelled to over 40 countries and worked for over ten years as art director for Visit Wales. He has recently founded the travel blog Travel with Little One.
Pin
Tweet
Share 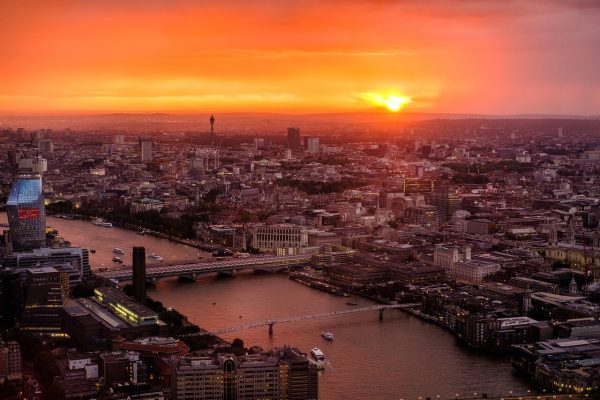 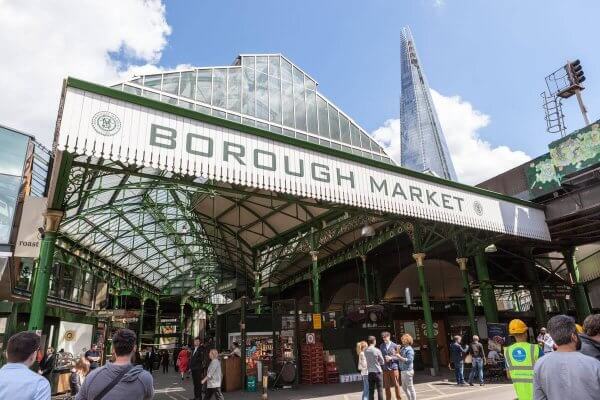 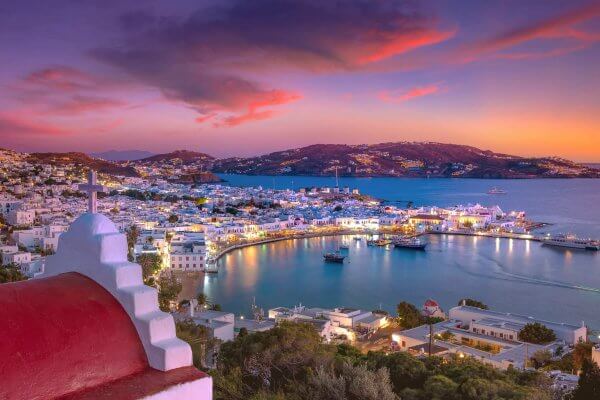