Lisbon is the European City that is trending with travellers, tourists and holidaymakers right now. On the edge of the Atlantic, with warm weather year round and culture, food and history to devour, anyone would wonder why a visitor would even need to leave Lisbon when they travel to Portugal. But not far from the Portuguese capital can be found an even more diverse range of historic towns, palaces and castles nestled amongst the spectacular natural beauty of the hills and the coastline that surround Lisbon. Just a day trip away, there is a lot of Portugal to be discovered from Lisbon. A great tip is to hire a car in Lisbon and get on the road to the following day trips from Lisbon. 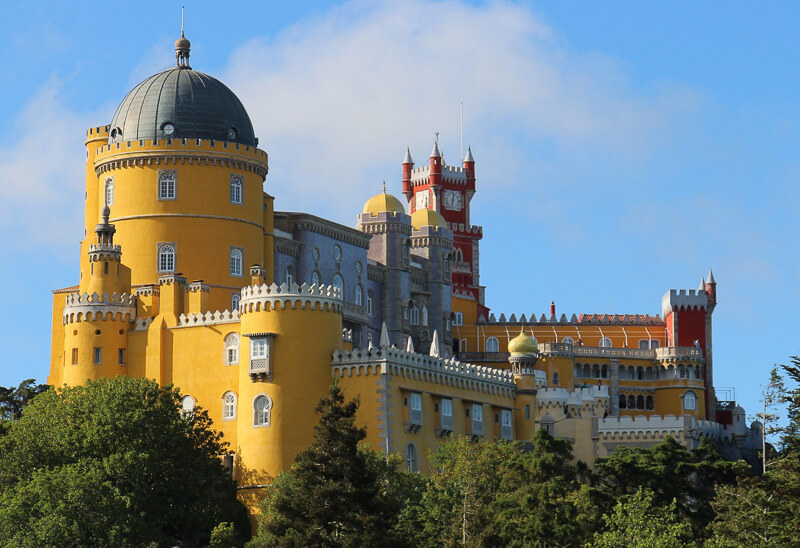 Found in the foothills of the Serra Sintra mountain range, the Sintra Region just outside of Lisbon has played an integral role in Portuguese history from the time of the Moors to more recent years. Amongst the small villages, towns and hilltops are some of Portugal’s most architecturally beautiful palaces and castles, so many in fact that the entire region is a UNESCO World Heritage Site.

Sintra is a place with enough natural beauty to have attracted the Portuguese Royal Family to build their summer retreat here in the cooler climate away from Lisbon and to return year after year for centuries. 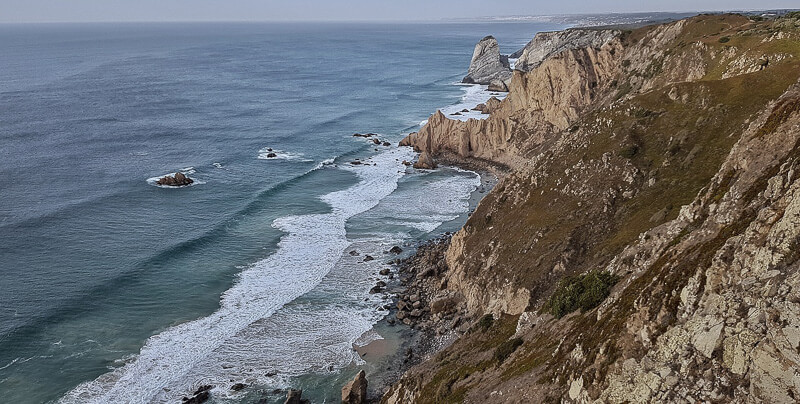 At the far western end of the Sintra mountain range can be found Cabo da Roca. This has the honour of being the most westerly point on the entire European continent. A prominent cape juts out roughly and ruggedly into the Atlantic, forming a dramatic, windswept scene that stretches towards the Atlantic Ocean. This is the last point on mainland Europe, and its marked by a tall lighthouse that stands at the very edge of the continent and offers spectacular vistas along the coast and out to sea. 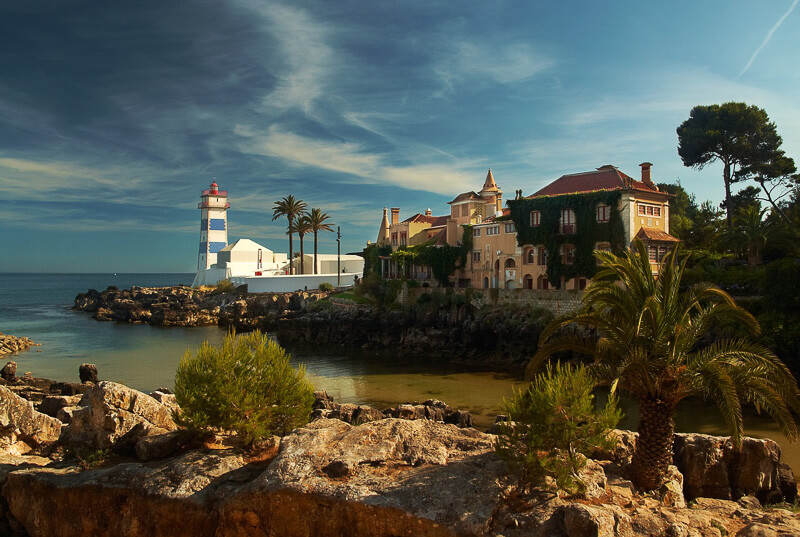 The coastal town of Cascais was just a small, simple fishing village until the late 19th Century when Portugal’s Royal Family decided that they liked this quaint seaside village so much that they would make it another one of their favoured summer retreats. Cascais shot quickly to fame, and since those fateful Royal summers have slowly gown over the decades to welcome more and more tourism, without losing its charm.

Cascais has beautiful, sandy beaches and a historic town centre that’s home to all the buildings and villas of the 19th-century Portuguese nobility, and the more modern tourism industry too. 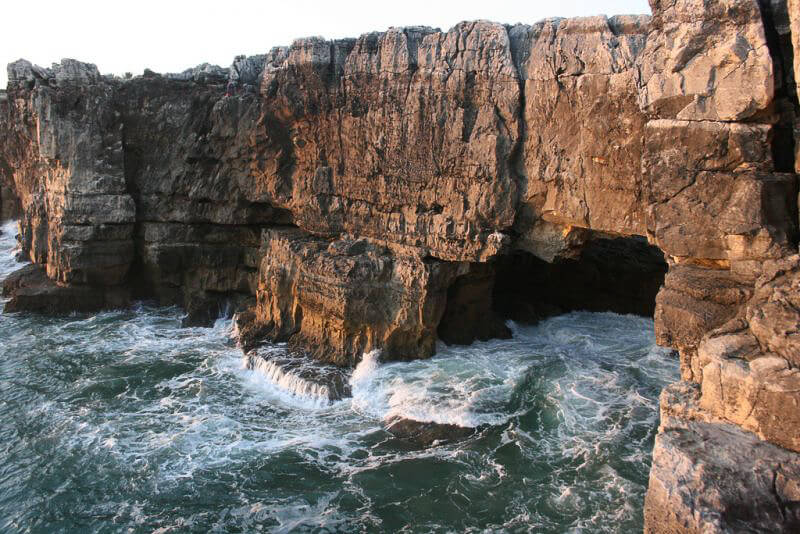 The Boca do Inferno – in English, Hell’s Mouth – is a dramatic, natural cliff formation that has been relentlessly pummeled into the shape it is today by the powerful Atlantic Waves. A cave has been hacked out of the rock by the ocean over the years and when the waves are in full force, they violently crash into the confined space, giving rise to the name – Hell’s Mouth.

Hell’s Mouth is either a 30-minute walk from Cascais, or it would be more convenient to drive along the coast from Lisbon, taking in Cascais and then Hell’s Mouth in one long day trip from the capital. 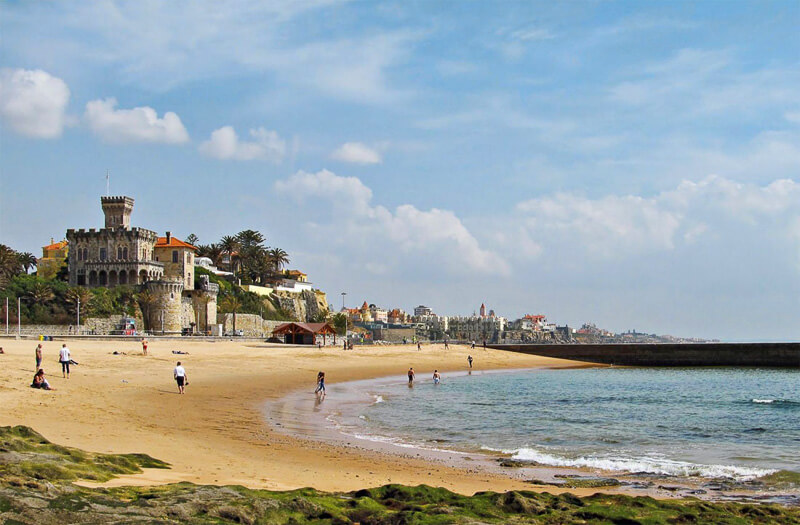 The Portuguese coast around Lisbon isn’t short of spectacular coastal resort towns, so much so that anyone pressed for time will find it difficult choosing exactly which spectacular resort towns to visit when seeking day trips from Lisbon. Estoril though should be on the list, as this little coastal town has pristine, white sand beaches and an intriguing history to explore, with old Portuguese castles and forts dotting the stunning coastline and overshadowing the beachgoers.

Not far from the urban suburbs of Lisbon is the stunning, wild and untamed Arrabida Natural Park. South of the city is a protected area of around 40 square miles of coast and hills, encompassing some of Portugal’s best beaches and scenery.

The opportunities for outdoor adventure at the Arrabida Natural Park are immense, and it’s possible to relax on the beaches, hike along the coast and to get really off the beaten track by kayaking or canoeing along the oceanfront. 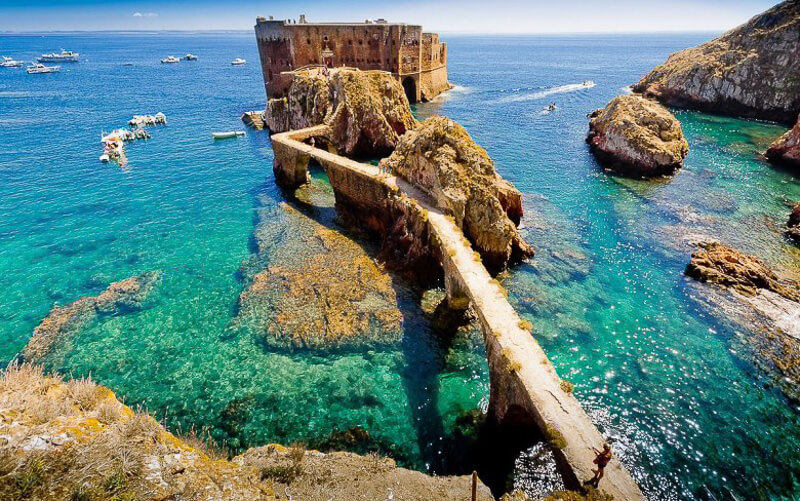 The isolated Berlengas Archipelago is a collection of islands off the coast of Portugal, not far from Lisbon. To get here requires a rough boat ride across some of the most storm swept parts of the Atlantic though, and in winter, boats won’t even attempt to battle the waves. Once there though, the islands offer a haven from the seas, as well as pristine snorkelling and abundant marine life in this protected reserve. The islands themselves are spectacular too, with steep cliffs rising abruptly from the ocean while an old Portuguese fort adds to the drama. 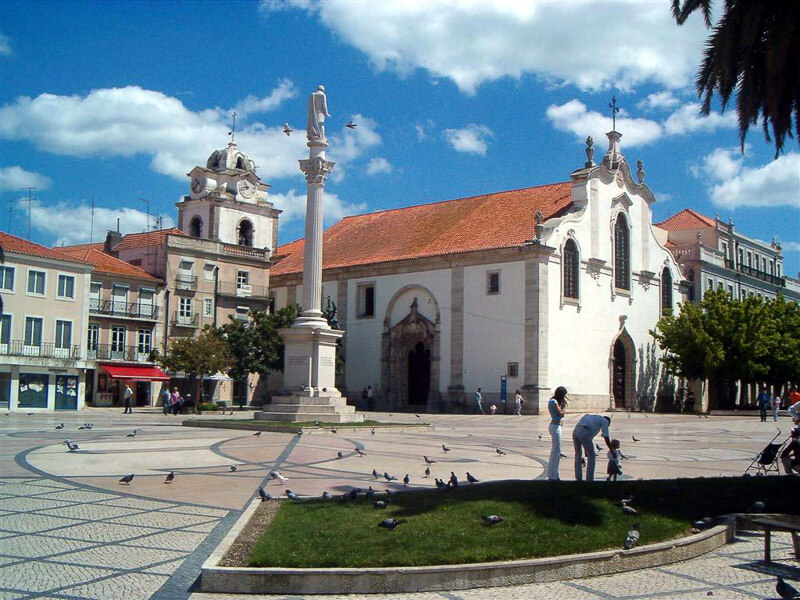 Setubal is another quaint and charming town on the Atlantic Coast, but as beautiful as its location is, the real reason to visit is to board a boat here to take a tour of the nearby Sado River. From Setubal, it’s just short journey to the estuary of the river, where a small pod of 30 or so bottlenose dolphins call the area home. This is the perfect opportunity to spot these animals in the wild, as dolphin sightseeings are almost guaranteed here, so much so that each of the dolphins even has an individual name. 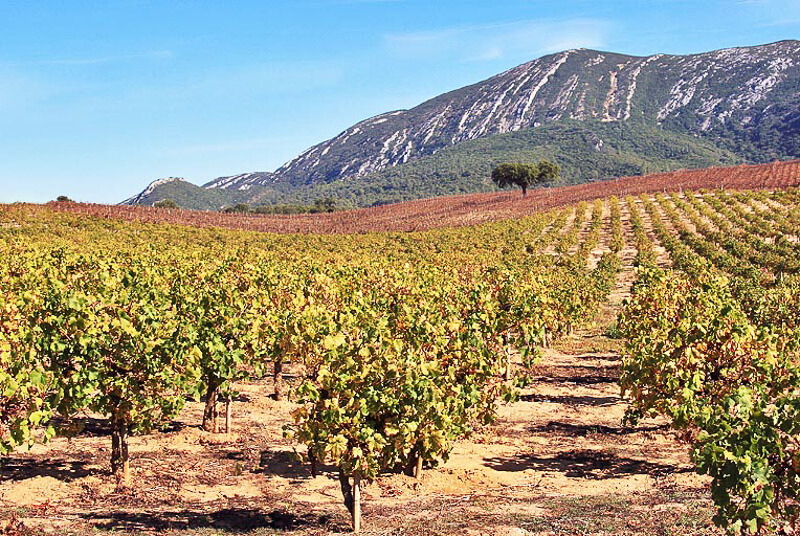 If you enjoy a glass of wine then Portugal is the perfect country to travel to. While Lisbon has plenty of bars and restaurants serving quality wine, there is nothing better than getting out as one of your day trips from Lisbon and seeing the wine at its source. Azeitao is a town famous for its wine, and being just south of Lisbon is the perfect spot to explore the wineries and to taste the wines that are produced here. Azeitao is also well renowned for its cheese and olives, which happen to be the perfect accompaniments to wine. Just make sure to book a tour, rather than self-drive so you can taste all the wine on offer! 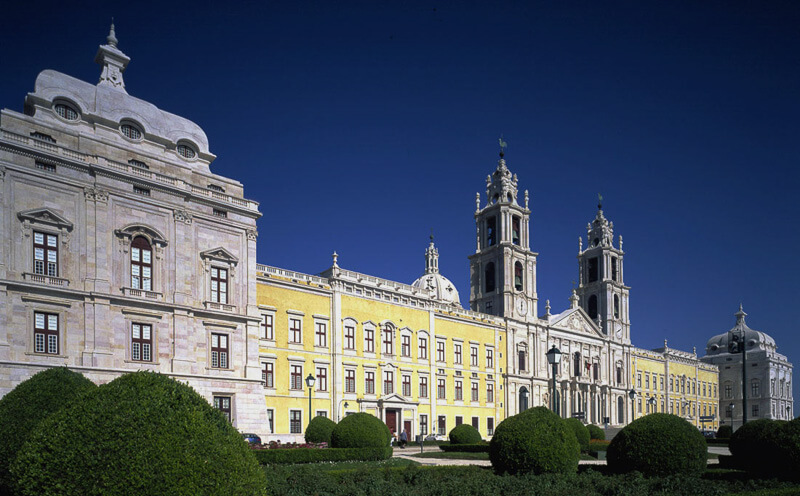 There is one reason to visit Mafra, and that is to see the enormous, extravagant and grand Palace of Mafra. This huge, intricately designed building was built in the middle of the 18th Century by the Portuguese ruler King John, a lavish display of wealth and power at a time when the King’s overseas Empire was bringing in an abundance of financial rewards. The palace took years to design and build and was so huge it dwarfed- and still does today – the small village of Mafra that is overlooks.

You can spend hours exploring the chambers, corridors and rooms and seeing the vastness of the building and the wealth that allowed its construction. 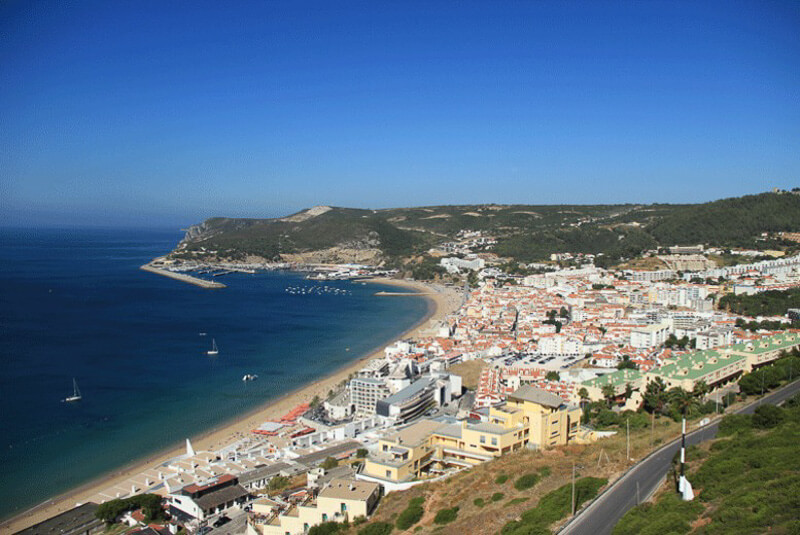 This coastal town 30 kilometres south of Lisbon is famed for its quality seafood. Being in a prime position along the Atlantic coastline, and with a spectacular beach lining a sheltered bay, the fishermen pull in some of the best catches each day to sell in the restaurants and shops of the town to the ever-increasing numbers of day trippers from Lisbon looking for a locally caught meal with local flavour. 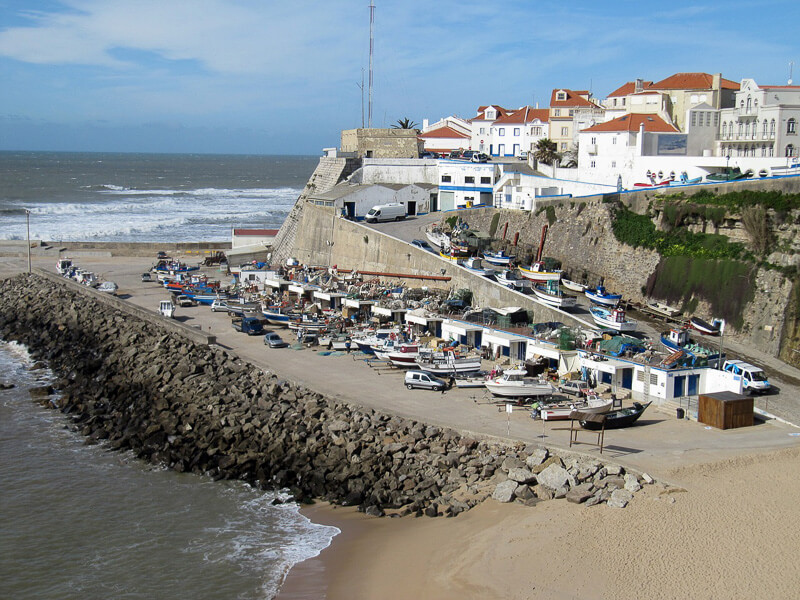 Ericeira is best known for its huge waves and crashing surf, a scene that draws in surfers from all over the world. If you want an active day away from Lisbon, then there are plenty of surf schools in and around the town of Ericeira, and even if you aren’t into surfing then the beaches are beautiful and the coastline is dramatic. 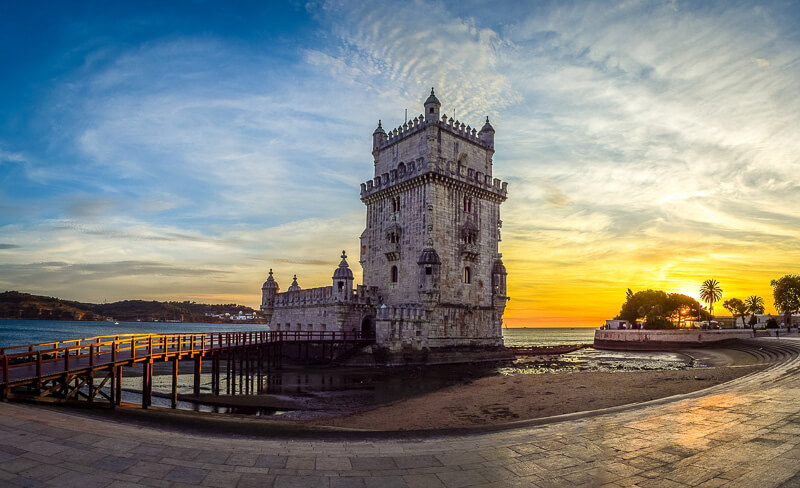 South of the city centre, making it one of the easier day trips from Lisbon, is the neighbourhood of Belem, an area of Lisbon that played a huge role in Portugal’s maritime and empire building history. It is the perfect place to start to understand the effect that Portugal’s voyages of trade, discovery and conquest had around the world and on Lisbon itself. The UNESCO World Heritage Belem Tower, a striking and unique defensive fortification is the highlight of this historic exploration. 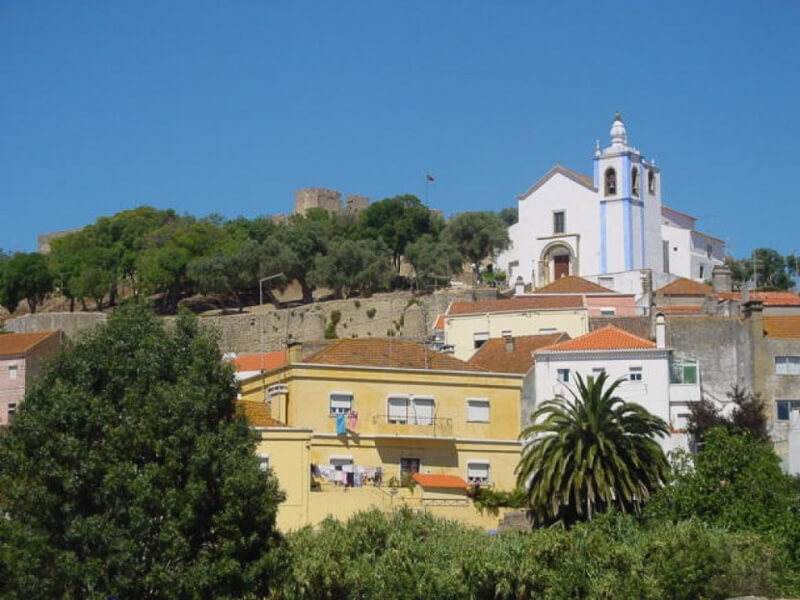 Further afield from Lisbon, 50 kilometres north of the capital, history lovers will find Torres Vedras, where there remains the vast fortifications built in the 19th Century by the British Duke of Wellington to defend Portugal against the French invasions of Napoleon. Lining the hills, valleys and towns of the region are innumerable forts and defences, all in various stages of ruin or preservation, which can be explored to give an insight into an important part of not only Portugal’s history but Europe as a whole. 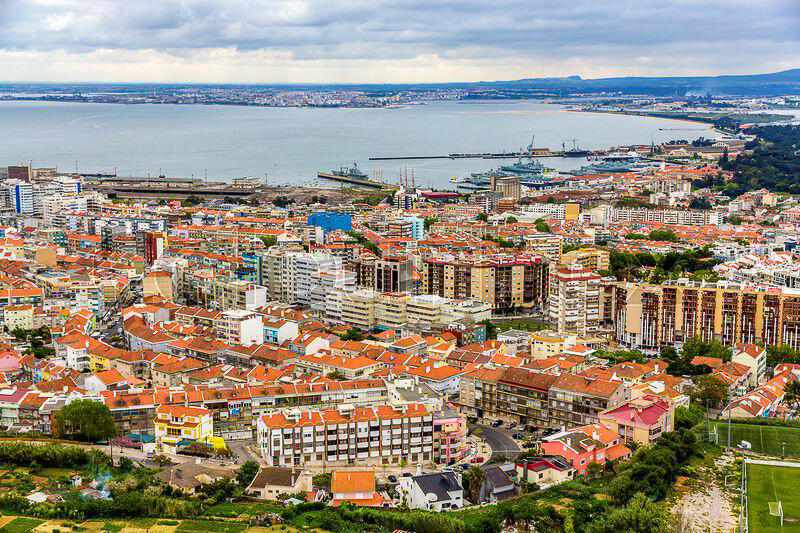 Almada is just on the other side of the river to Lisbon. It’s a separate city, although the two have begun to merge and outgrow their traditional confines and boundaries. Almada, although just across the river, has its own unique history and style when compared to Lisbon, and venturing south of the river across the connecting bridge is a day trip in itself.

Related articles:
Check out the Best Apartments in Lisbon’s historic Alfama District.
We give you the Best Things to do in Lisbon.
Our recommended 2 day Lisbon itinerary
Discover the best areas and hotels by reading Where to Stay in Lisbon.
Have you considered Porto for your city vacation? We compare the two cities here. 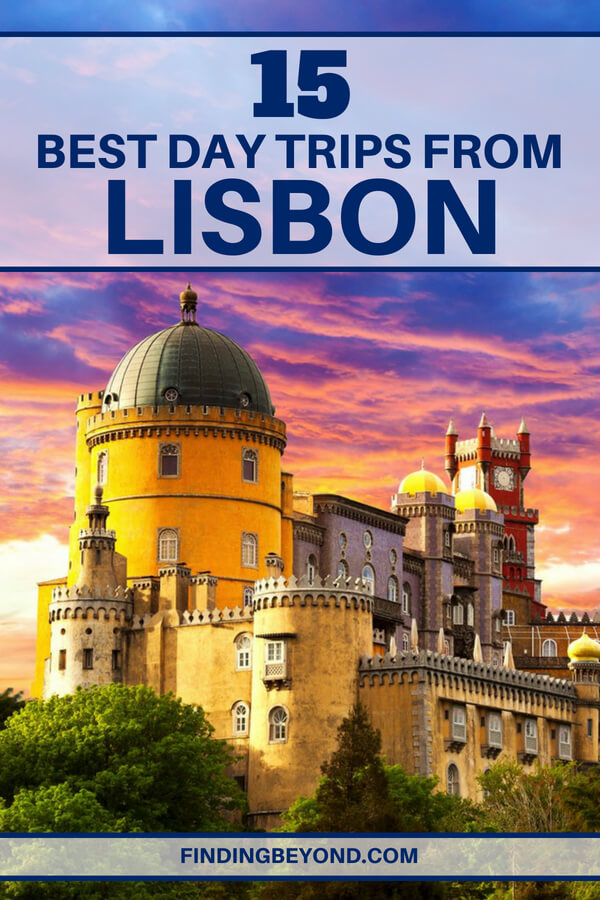 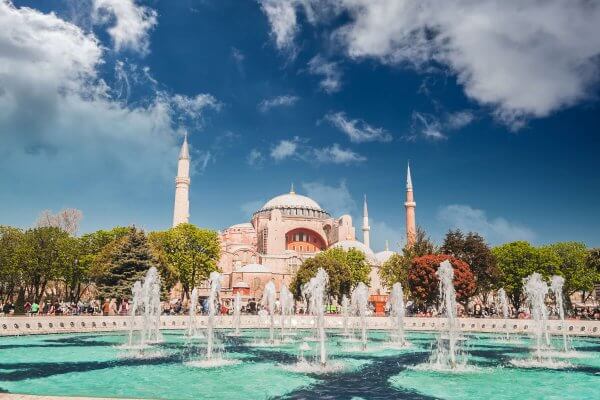 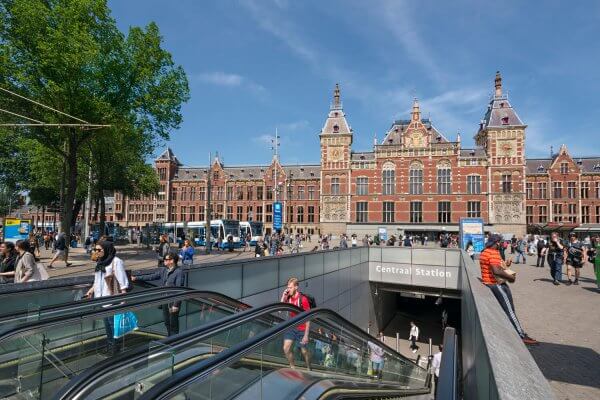 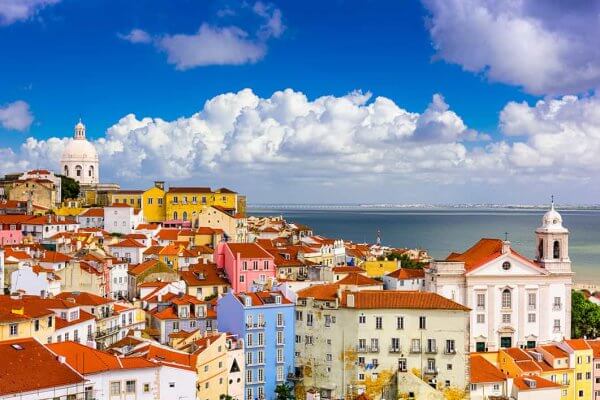