10 Best Things To Do in Tbilisi Old Town, Georgia

Tbilisi is the capital and the largest city of the Republic of Georgia. It lies on the banks of the river Mtkvari. The city totals a population of around 1.5 million, with Tbilisi Old Town being situated on the right bank of the river. The city dates back to the 5th century AD and it’s been an important cultural and trading centre of the Caucasus region.

Georgian history says the Tbilisi Old Town was founded by King Gorgasali of Iberia. The city passed through the hands of Persians, the Byzantine Empire and Arab conquerors before being re-conquered by King David of Georgia in 1122. The Mongols took over in the 12th century and the city continued to pass between nations.  The city was under Russian rule from 1801 until 1917 when it was known as Tiflis. Independence came again from 1918 to 1921, then the Red Army invaded and Tbilisi was under Soviet rule until 1991. After the break-up of the Soviet Union, the Communist Shevardnadze remained as President of Georgia until 2003. Demonstrators led by Mikheil Saakashvili stormed the Parliament session with red roses in hand. So the Rose Revolution came about and delivered the beginning of democracy. 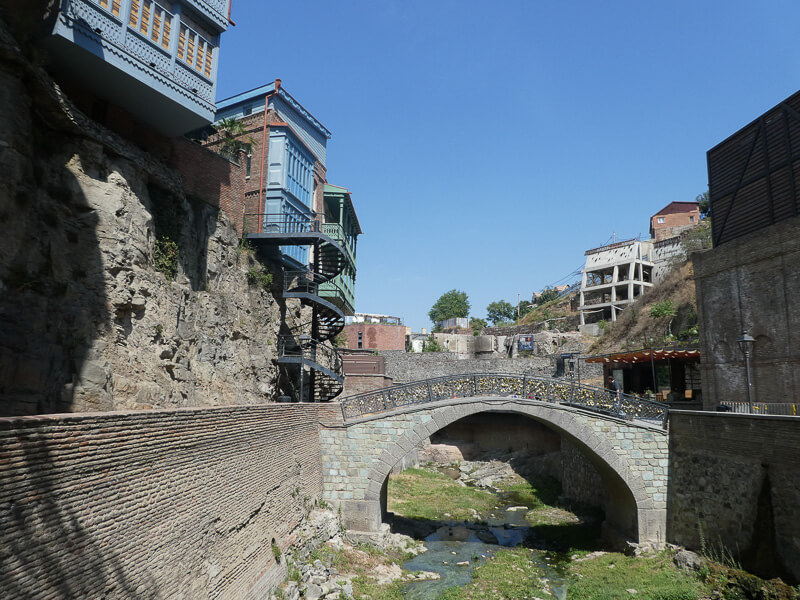 The city is a glorious fusion of architectures with both European and Asian influences evident. Tbilisi Old Town is compact, although hilly and it’s easy to explore in a long weekend. Although the city itself has been destroyed and rebuilt 29 times, Tbilisi Old Town remains primarily intact. It’s one of the safest cities in Europe and despite the Georgian language having a different alphabet you shouldn’t experience any difficulties in communication. You can easily explore Tbilisi in a weekend or slightly longer.

Tbilisi Old Town is built on a hillside up from the River Mtkvari up to the Narikala Fortress and the statue of Mother Georgia – and it’s these winding lanes that make your feet the primary transport mechanism in Tbilisi. It’s no hardship though, as there is much to see and many cafes in which to take refreshment.

Let’s check out the 10 best things to do in Tbilisi Old Town. 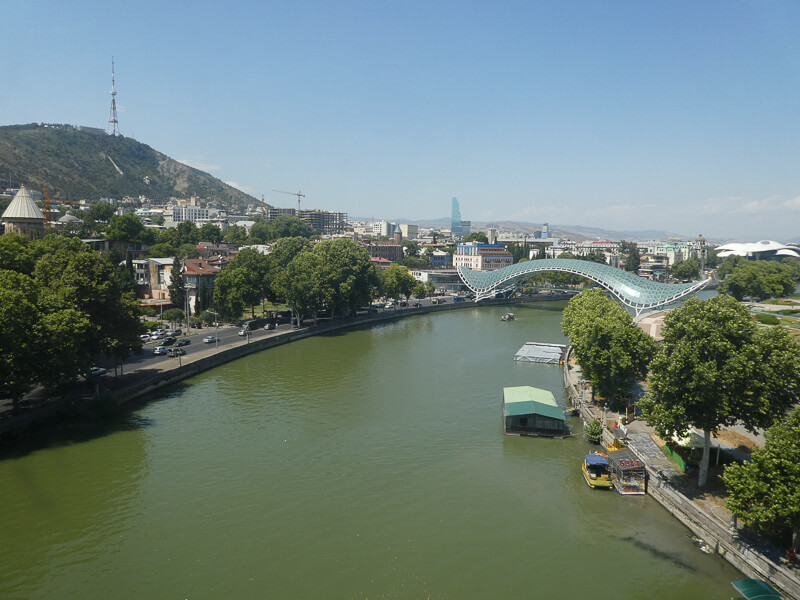 Start your visit to the Old Town of Tbilisi by leaving it. Trust me. Head to the banks of the River Mtkvari and cross the Peace Bridge.

The Peace Bridge is Tbilisi’s newest bridge and opened in 2010. It is constructed in a bow format, although its nickname is the “Always Ultra”, as some see it resembling a sanitary pad!  The bridge is just for pedestrians and is made of steel and glass. It’s spectacularly lit at night with thousands of LEDs and links Tbilisi Old Town with the new town.

From the Peace Bridge, walk into Rike Park and join the line for the Aerial Cable Car. 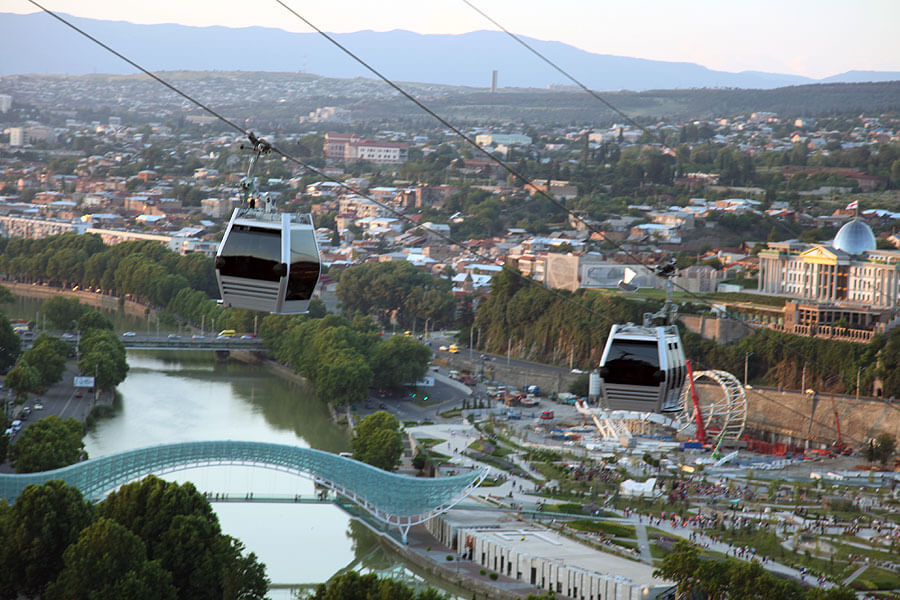 This cable car opened in 2012 and connects Rike Park on the banks of the River Mtkvari with Narikala Fortress high above old Tbilisi. At just 2 Lari (around 0.9 euro) a ride, you’ll get spectacular views over Tbilisi Old Town and the wider city itself. You can pay for this trip with cash or use the Tbilisi metro card which will allow you to skip the line for the ticket booth.  The cable car is open from late morning until midnight.

It’s a superb introduction to the layout of the city and will allow you to orient yourself. You’ll see how the old and new architecture present here in Tbilisi just works perfectly. It will also give you a sense of the labyrinth nature of the streets and alleys that make up Tbilisi Old Town. 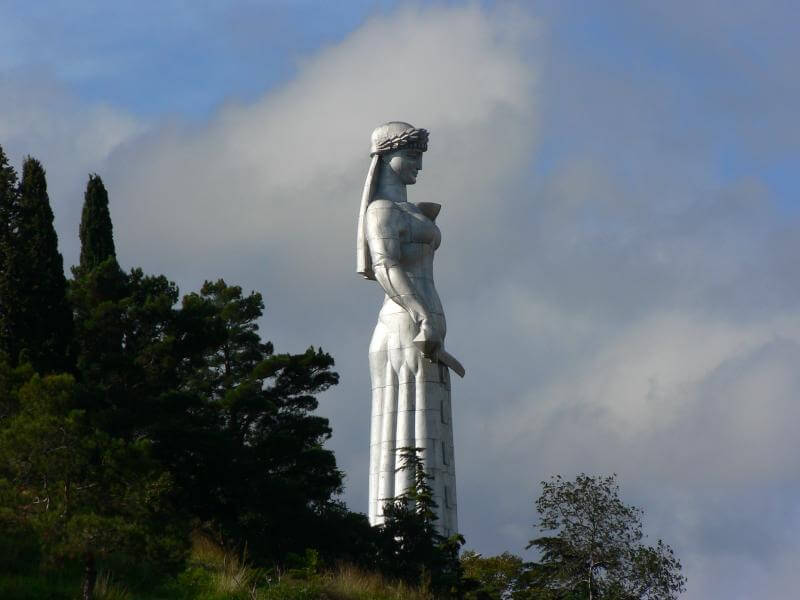 Omnipresent in Tbilisi and mistress over all she surveys, the statue of Mother Georgia, or Karlis Deda. The statue is 20 metres high and made of aluminium. Mother Georgia was installed in 1958, as Tbilisi celebrated its 1500th anniversary. Karlis Dedas is the symbol of the Georgian National Character – a woman in Georgian National Dress, holding a bowl of wine to greet those who come as friends, her right-hand holds a sword for those who come as enemies. You don’t need to walk to Mother Georgia to see her, you can spot her from all around the city. 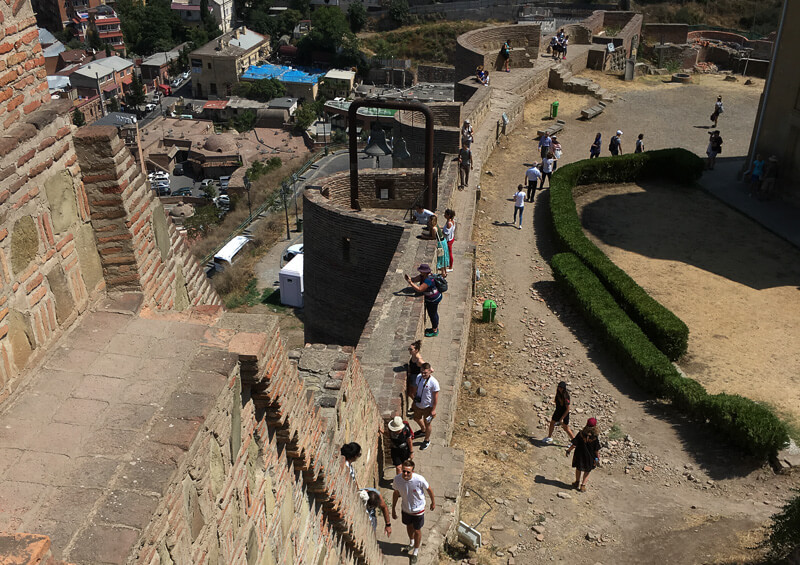 On arrival at the end of the cable car run, you’ll have spectacular views over the city, down to the river and see the Peace Bridge where you started your visit to old town Tbilisi.

Narikala, also known as the Mother Fortress of Georgia is free to enter. It looks more impressive from down below and little remains of the fortress which was built in the 4th century. It was originally known as Invidious Fort, but the current name, Narikala is either Persian or Mongolian and means “little fortress”. The fortress was damaged by an earthquake in 1827 and was not restored.  The church at the top was built in the 12th century and renovated in 1996. From Narikala Fortress there’s a trail that runs back down through Tbilisi Old Town and past the entrance to the Botanical Gardens.

Starting your trip to Tbilisi Old Town means that you’re sightseeing as you head back down through the old town. Trust me, if you’re lucky enough to catch warm weather you’ll be glad of the downhill slope. 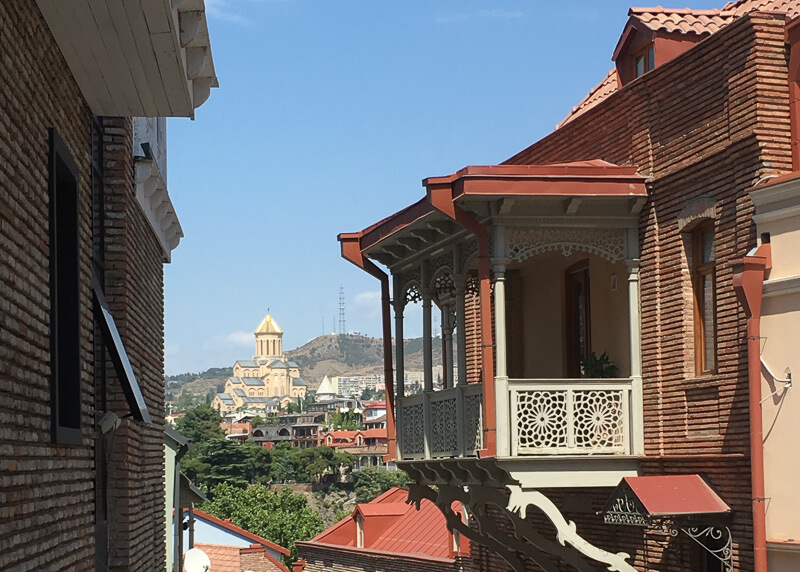 Walking down through the lanes of Old Town Tbilisi gives you a sense of the mix of architectures. I don’t believe I’ve ever travelled to a city that has so many balconies. They’re where, in olden times, gossip was passed, goods were sold and marriages were planned. Ladies sat behind intricately carved screens that allowed breezes to blow through. 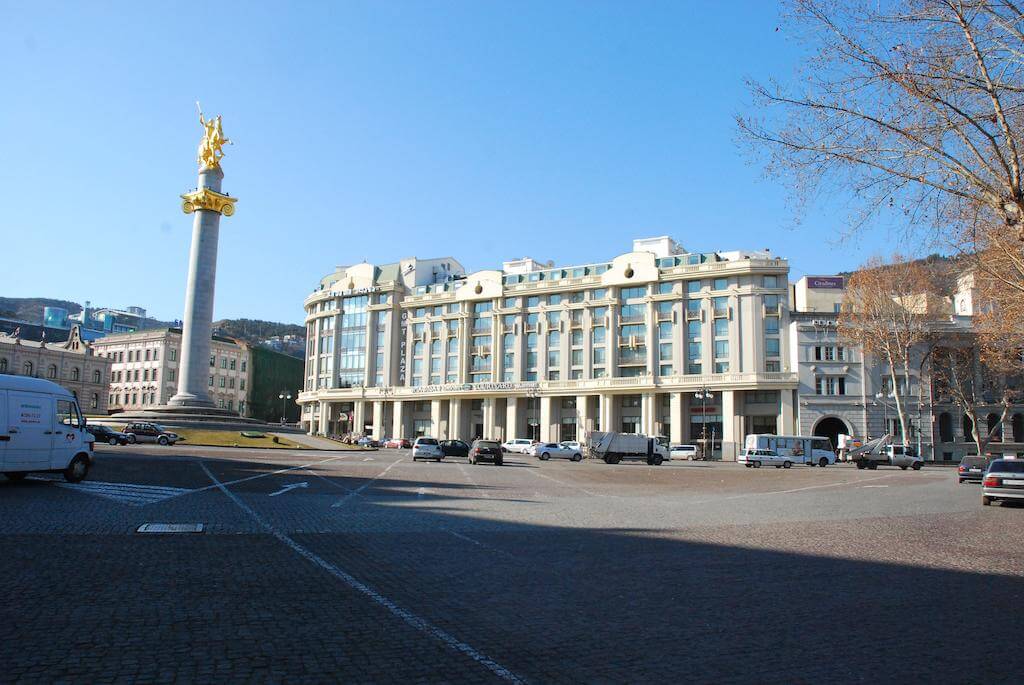 There’s no place to get a better sense of the new Georgia than Freedom Square. It marks the edge of the Tbilisi Old Town. The golden statue of Saint George on the Freedom Monument in the square’s centre was erected in 2005 following the Rose Revolution. 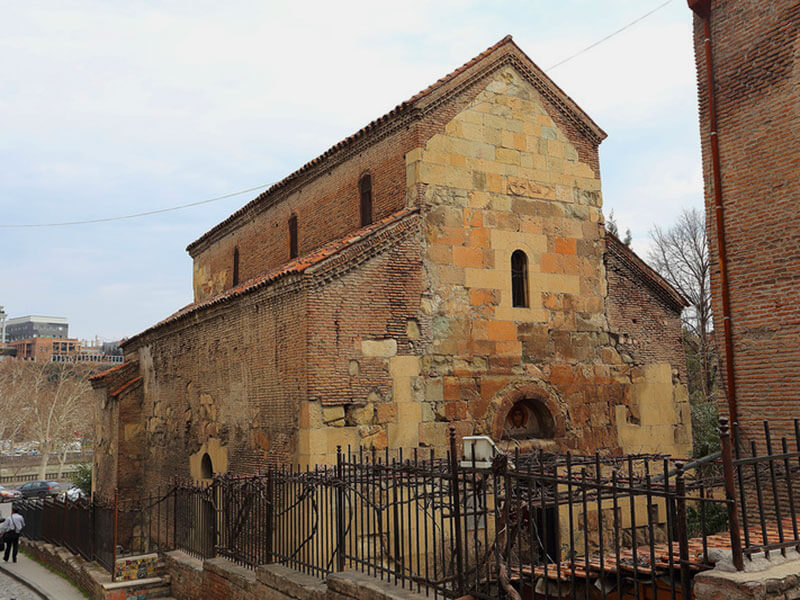 The oldest church in Tbilisi Old Town is the Anchiskhati Basilica, it was built in the 6th century by the founder of Georgia’s son, Dachi. It’s very unassuming on the outside and if you’re not careful you’ll walk past it. The walls are huge stone blocks, it has three naves and the frescoes inside are superb. Be aware that this is a working church and you shouldn’t let your photo taking get in the way of those worshipping. 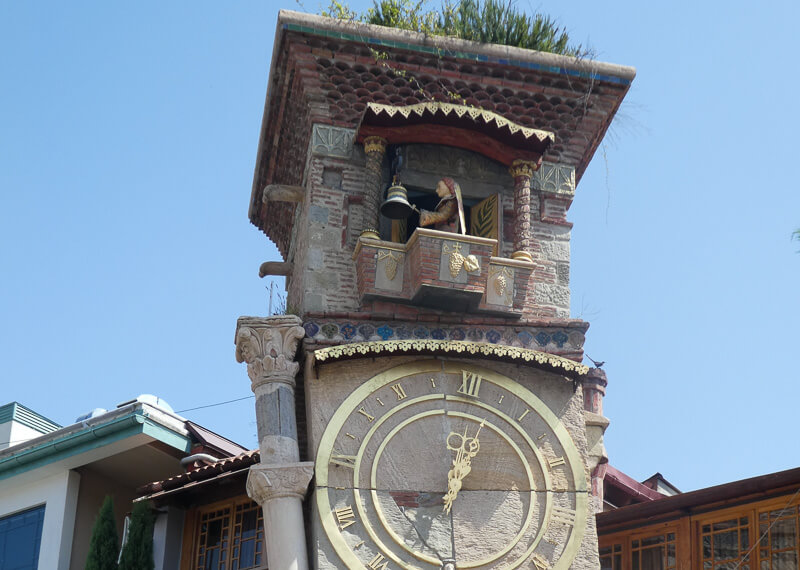 Georgian theatre and film director, Rezo Levanovich Gabriadze is responsible for the fairytale clock tower outside the marionette (puppet) theatre that also bears his name. An angel comes out and strikes the bell with a small hammer on the hour, however at noon and 7 pm the tower puts on a show, “The circle of life”. Built in 2010, the tower is decorated with hundreds of tiles that Gabriadze designed himself.

9 – Learn About the Legend of Tbilisi’s Beginnings 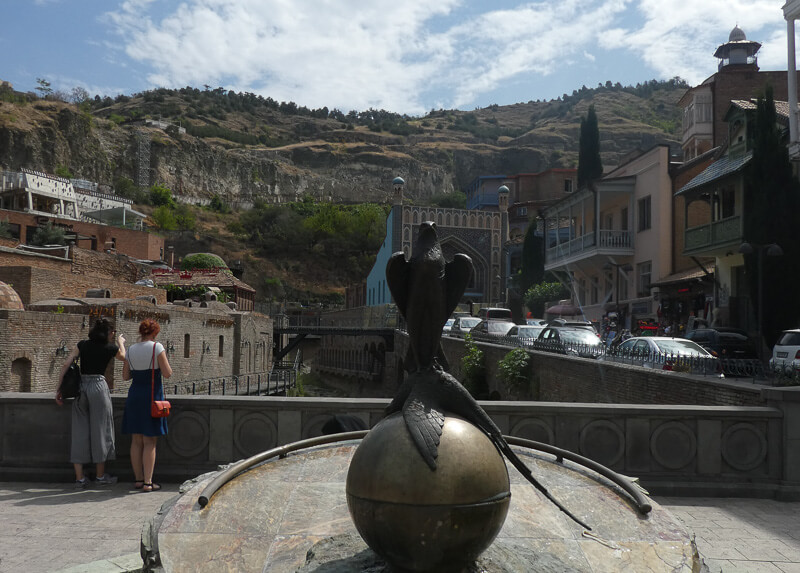 Legend has it that the founder of Tbilisi, King Vakhtang Gorgasali was hunting in the wooded region that is now Tbilisi. His falcon caught a pheasant but both birds fell into a hot spring and died. He was impressed with the numerous sulphur springs in the area and founded the city. The name Tbilisi comes from the old Georgian word meaning “warm” or “warm location”.  You can visit the fountain that displays the legendary falcon and pheasants in the Abanotubani area of Tbilisi Old Town.

10 – Relax and revitalize at the sulphur baths in Tbilisi 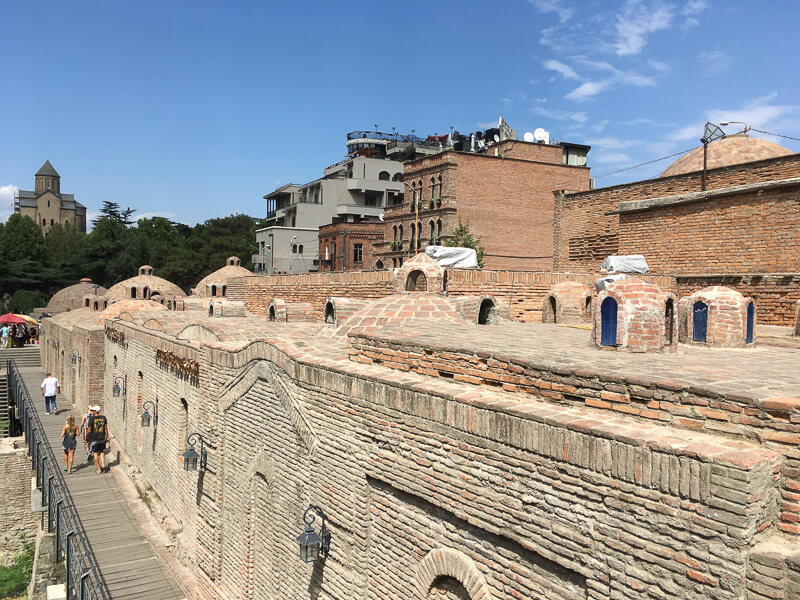 While you’re here in the Abanotubani area underneath the Narikala Fortress you should take in a little relaxation. The is the most historic part of Tbilisi Old Town, where the sulphur springs bubble up. There used to be more than 60 public bathhouses here at the height of their popularity. Now you’ll find 5. You’ll easily spot them from the elegant domed roofs. Go for the shared public bath or take a private room (for up to 5 people), including a massage and a scrub for less than US$20 and you’ll feel revitalized and ready to take on more of Tbilisi.

Be sure to add Georgian Food & Drink to your list of things to do in Tbilisi. It’s impossible to experience the old town of Tbilisi without partaking of some of the best Georgian food and drink.  The country is famous for (allegedly) being the birthplace of wine, and wine tasting shops abound. Try Wine Underground in the old Tbilisi and taste to your heart’s content. Be sure to keep room for a little chacha or flavoured vodka that you’ll find throughout Georgia. For a superb Georgian food, experience find your way off the beaten track to Racha – where the dining room sits almost underground, the check is calculated on a wooden abacus and the food is hearty, tasty and cheap. 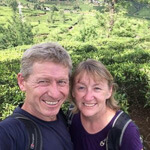 Sarah Carter & Nigel Dockerty are Gen X Travelers with a Y Attitude, they write about their travels at A Social Nomad. They like to travel slow, eat and drink local.  You’ll find them in museums, on wine tours, hiking trails and exploring temples.  Or, you can catch up with them on Instagram, Facebook and Twitter. 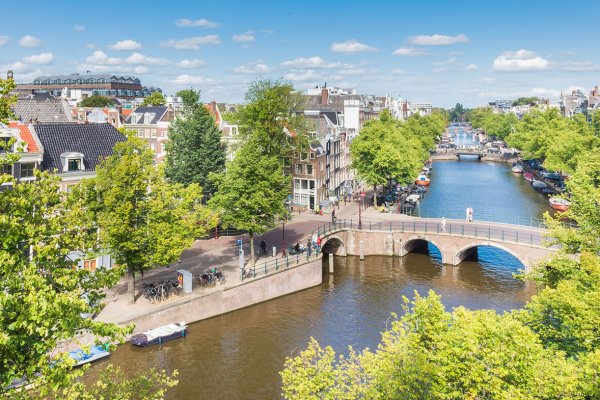 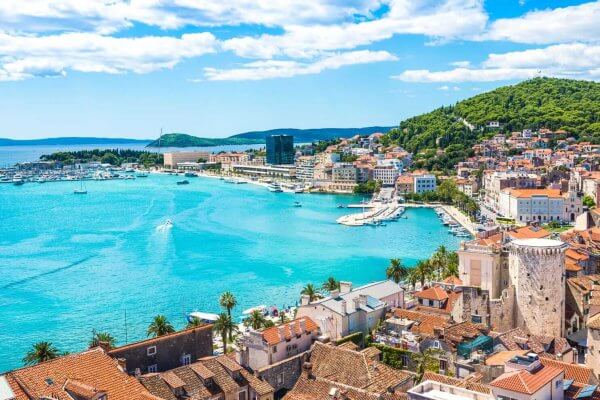 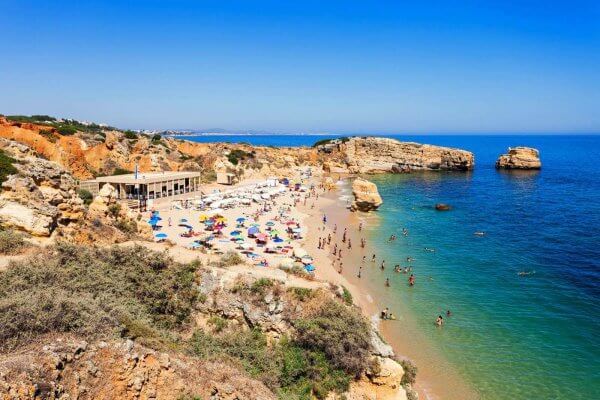