I have to admit, driving a tuk tuk didn’t make it on our travel bucket list. We’ve been tuk tuk passengers hundreds of times in countries such as Thailand, India and Sri Lanka but not once did I watch the driver and crave to be in his seat. The lack of desire most likely came from the fact that our tuk tuk experiences have commonly been in busy, congested cities like Bangkok and Mumbai. It didn’t look much fun trying to dodge everything that these city roads throw at you while driving a makeshift vehicle that sounds like it’s on its last legs.

But then we came across The Tuk Tuk Club, Thailand’s very first self-drive tuk tuk tour in Chiang Mai who specialise in off the beaten track tours. The Tuk Tuk Club offers the chance for travellers (with a driving licence) to drive their very own tuk tuk around the countryside of Chiang Mai. There are no horrendous Bangkok or Mumbai type streets to be seen on a Tuk Tuk Club adventure, just mostly quiet roads, village streets and rural lanes.

My desire to drive a tuk tuk suddenly came from nowhere and we soon booked on a one day Tuk Tuk tour in Chiang Mai not long after landing in the country.

Learning to Drive a Tuk Tuk 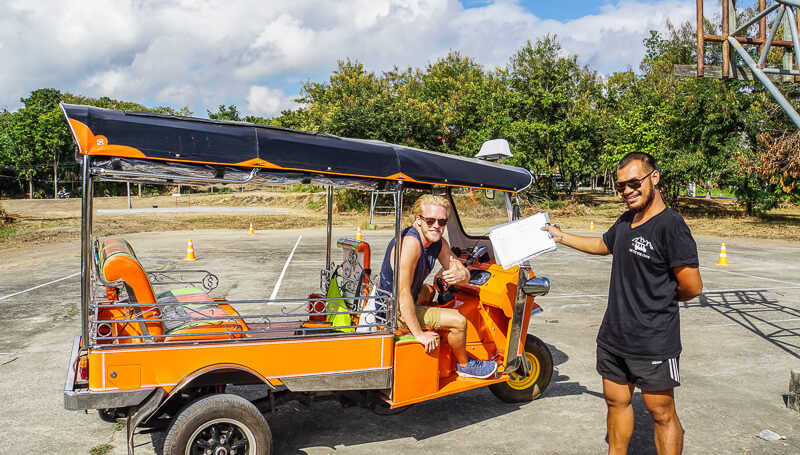 The Tuk Tuk Club are not so stupid to allow anyone to jump into one of their twelve tuk tuks and drive, of course, you need to show a valid driving licence from your country of residence and then spend plenty of time practising off road before being tested to ensure that you and others on the roads will be safe.

The garage and basketball court that they use for tuk tuk training is an hours drive from Chiang Mai city centre so it’s miles away from the traffic-heavy streets of the city. We were taken to our tuk tuk named Jen and given a full tour of the vehicle’s controls.

The Tuk Tuk Club’s tuk tuks are not like the tuk tuks you usually find on the roads in Asia – they have been specially made for these tours. They’re wider to allow more comfort and space, slightly higher for more headroom and fitted with far more superior and reliable petrol engines and a 5-speed gearbox. 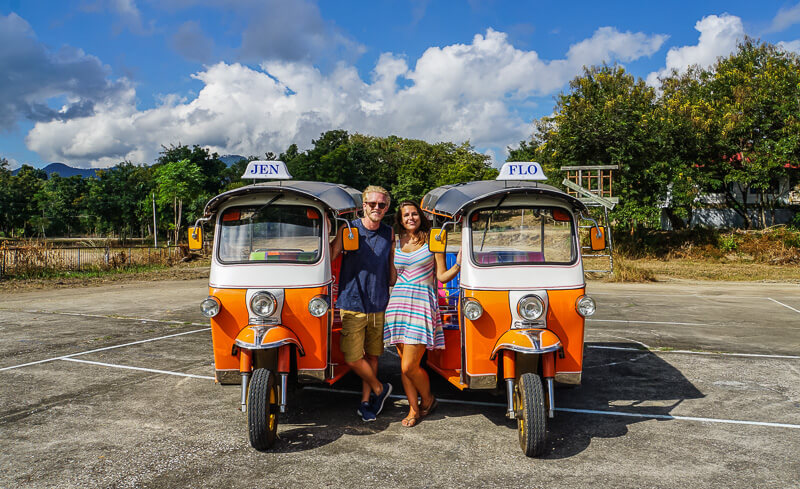 It was now my time to hop in the hot seat and give it a go. I’ve driven cars and I’ve driven mopeds which both came in handy when driving a tuk tuk. The steering and acceleration were much like driving a moped with handlebars instead of a steering wheel and twisting the right handle to accelerate. But then I was thrown off by having no breaks on the handlebars, instead, you break using a pedal like a car. Again like a car, there’s a clutch pedal by the left foot but the gear stick is situated between the legs instead of to the side.

It all took a bit of getting used to but after 30 minutes of driving around the perimeter of the basketball court, zig-zagging around cones and reversing several times I was ready for the test which I passed with flying colours. Time to hit the road!

Looking to get out of Chiang Mai? Check out our things to do in rural Chiang Dao and Pai! 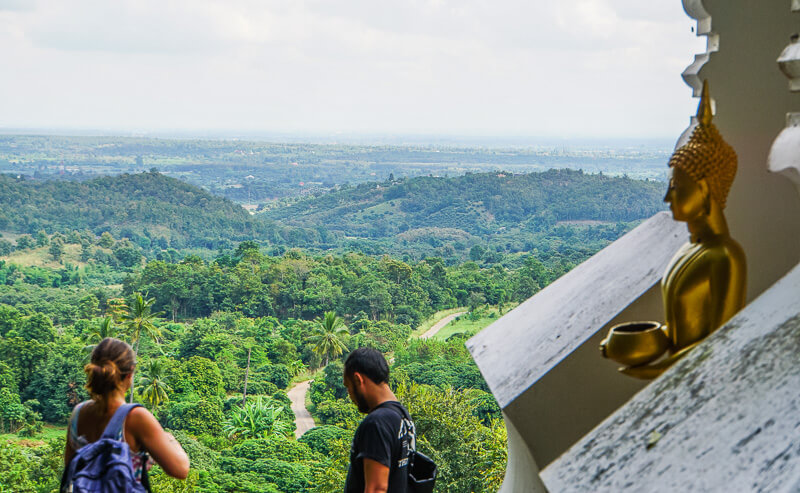 Buddhist temple with a view!

We’ve been to a lot of Buddhist temples in our time but they have mostly been in cities or towns where we’d been joined by plenty of tourists. After driving our tuk tuk through the gorgeous Chiang Mai countryside, taking in the nearby mountains and waving to farmers attending their crops, our Thai guide, Smithy, took us to two (don’t ask me their names) rural Buddhist temples where there was nobody to be seen aside from the odd monk or temple boy (young men who serve the monks).

Smithy provided some very interesting in-depth information about the Buddhist culture. He knew his stuff even though he himself is Muslim. Being Muslim, we also got to learn a little bit about Muslim life in Thailand. 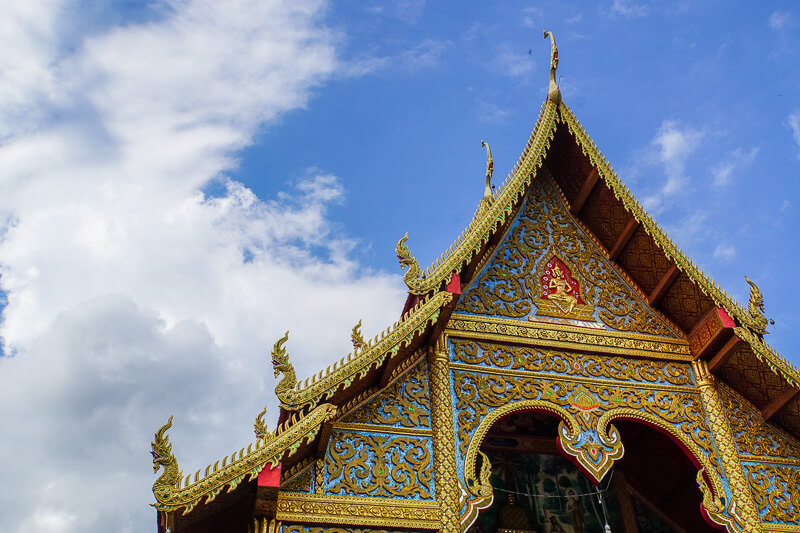 The two temples were very different. The first was rustic and set amongst the jungle landscape with some Buddha images placed in an almost cave-like environment. We got to ring a Buddhist bell while making a wish and then climbed to a grand stupa at the top of a hill which offered some breathtaking views of Chiang Mai’s countryside.

The second of the temples is similar to the temples found in Chiang Mai’s old town with beautifully ornate entrances, golden dragons and colourful artwork telling the story of Buddha. 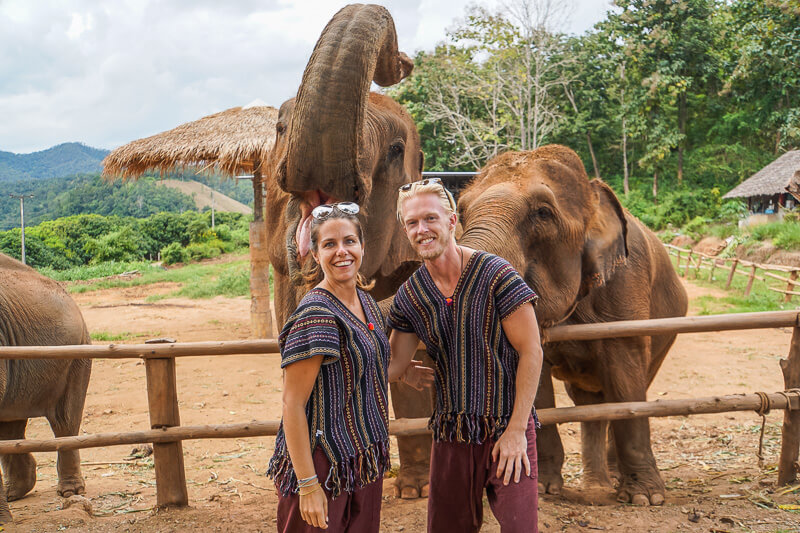 This was the part of the tour that we were most apprehensive about. Elephant camps and care in Thailand is currently a big talking point and we were really hoping that the elephant camp on The Tuk Tuk Club’s itinerary was one of the good ones. Before booking this tuk tuk tour in Chiang Mai we made sure that the camp does not offer Elephant riding.

When we arrived at the elephant home (the friendly owner prefered to call it a home) after more tuk tuk driving, we were offered a simple but tasty lunch of fried rice and watermelon. During lunch, we talked with some volunteers from the UK and Australia who were staying at the home for two weeks to help care for the elephants.

We were given a traditional Thai village outfit to wear so not to get our own clothes dirty and then went to feed the elephants a full basket of bananas. This was our first experience feeding elephants and boy are they greedy. Their trunks would snatch those bananas from our hand before we’d even had the chance to choose which elephant to feed. We fed them in two ways – by placing bananas in the snouts of their trunks or by shouting a strange Thai noise which instructed the elephants to lift their trunks and open their mouths. 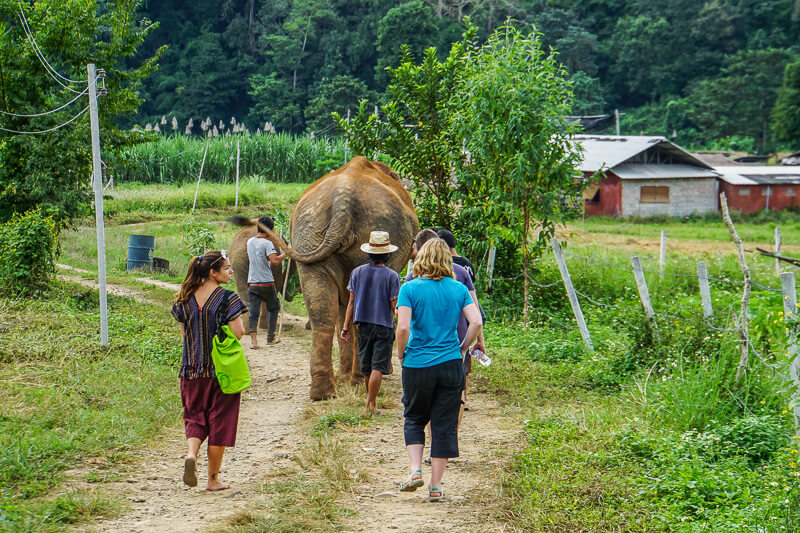 Walking the elephants to the river

Once the basket was empty of bananas we took three of the elephants (mother and two children) on a 45-minute walk through rural land to a shallow river where we spent several minutes bathing them in river water and scrubbing them with brushes. As soon as we arrived at the river the elephants squeaked with joy and rolled over under the water. The two child elephants were continually playing and were clearly enjoying themselves.

It was all fun until another tour group arrived nearby with their own elephants which seemed to exaggerate the mother somewhat. She growled a few times before deciding that she’d had enough and wanted to take her babies home. The mahouts (elephant keepers) respected her decision and walked them back to the camp. 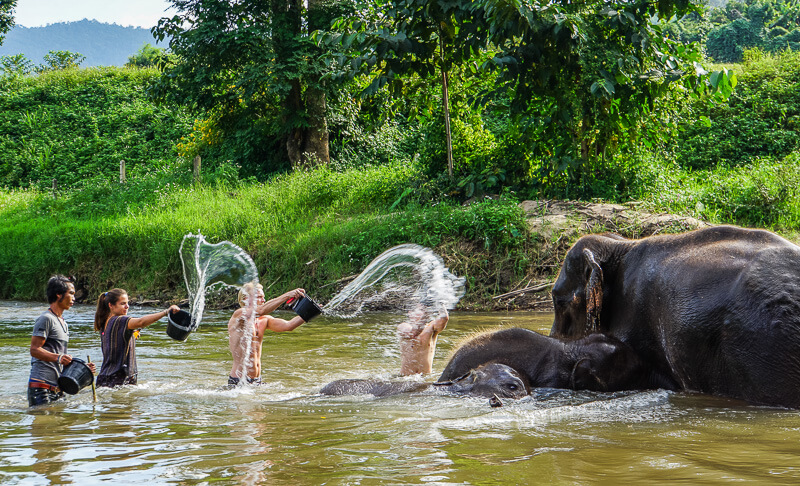 Bathing the elephants but keeping our distance at first

Elephant tourism is big business in Northern Thailand and we were surprised to hear that there are 45 elephant camps around Chiang Mai. Most of the camps have listened to the western world and stopped offering elephant rides but it was upsetting to hear that a few still do due to the demand from Chinese tourists.

The whole experience with our elephants was really enjoyable and the animals seemed very happy and healthy. But remember no matter how well they are taken care of, elephant camps in Thailand are created for the sole purpose of tourist entertainment so do your own research to decide which camp to visit or if you wish to visit at all. 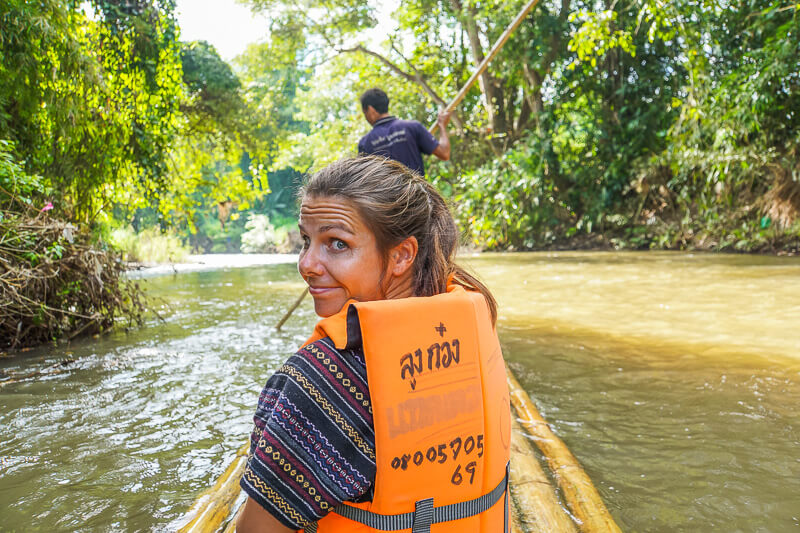 Shelley up front on our bamboo raft

No tuk tuk tour in Chiang Mai would be complete without a fun ride down a river on a narrow bamboo raft. This wouldn’t be our first time on a bamboo raft but it was still just as enjoyable. The 20 minutes was at times relaxing as we floated on calmer sections of the river but at other times the adrenaline would kick in as we took on rapids while trying to avoid hitting large rocks.

Our bamboo raft driver did all the hard work as he stood at the front with a long bamboo pole which he used to steer using the bottom of the river and the traitorous rocks. The best part was towards the end when our guide Smithy was telling us that we temporarily have to get off the raft, walk along the bank a little while and then re-board to avoid a particular rough rapid ahead. As soon as Smithy finished instructing us he quickly realised that our driver was heading straight for the rapid. Seeing the panic on Smithy’s face was the most entertaining way to finish our self-drive tuk tuk tour around Chiang Mai’s awesome rural landscapes. We obviously made it through the rapids alive 🙂

While we enjoyed The Tuk Tuk Club’s one-day tour in Chiang Mai, they also offer a 5 day and 11-day tuk tuk adventure across Northern Thailand. Their itineraries sound amazing so check out their website for more details. Make sure to add a Tuk Tuk Club tour to your Chiang Mai itinerary!

This tour was sponsored by The Tuk Tuk Club but all thoughts are our own. 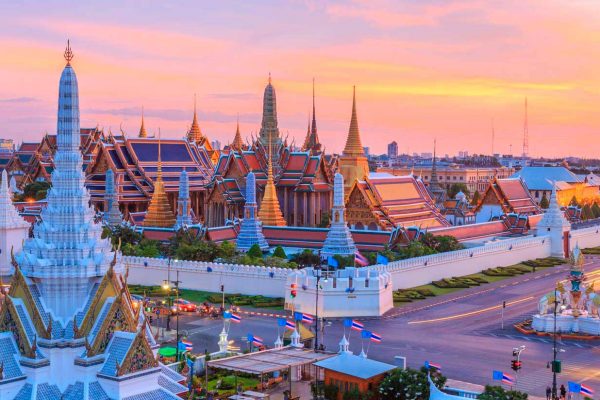 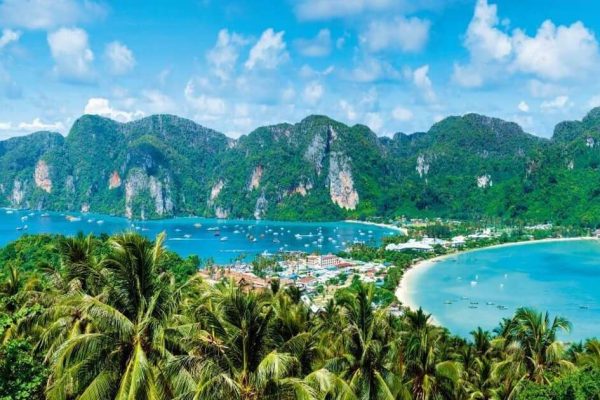