Things To Do In Malang City: Our Malang Itinerary

Malang City was our first destination in East Java after leaving the country’s central region. Malang is East Java’s second largest city and would be our last big city stop on our tour through Java. Our primary reason for stopping in Malang City was to break up the long 15-hour journey between Yogyakarta and Mount Bromo. Many travellers on a tight schedule endure that epic journey, but with more time on our hands and realising there are enough things to do in Malang city, we decided to stay for 3 nights at MADOR Malang Hostel.

Our Things To Do In Malang Itinerary

You can cover all the things to do in Malang city in a day, but it’s a comfortable enough city for a 2 or 3-day stay. We recommend adding these city sights to your Malang itinerary.

Get Instagramming At The Colourful Village 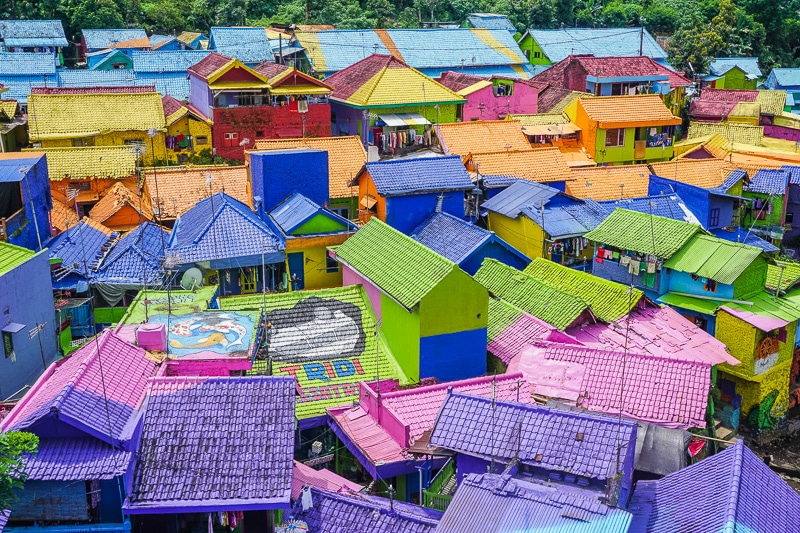 If arriving in Malang city from the west by train, the first thing you’ll notice (it’s impossible to miss) is the rainbow coloured village. The train tracks rise above the village offering an awesome birdseye view. This former slum neighbourhood, split in two by the Brantas River, had a rainbow makeover just over one year ago. Its eye-catching paint work compares to the famous colourful favelas in Brazil’s Rio de Janeiro.

The plan was all down to a local university student who wanted to brighten up the village for its residents, clean the streets and put it on all the tourist’s things to do in Malang city list. With a local paint manufacturer donating all the needed paint, the idea was put into action.

Thanks to local volunteers, the neighbourhood now screams all the colours of the rainbow and more. Every wall, roof, door and walkway has had a makeover. With added colourful hanging umbrellas and lanterns, it’s a sight that wouldn’t be welcome with a hangover!

Location – MAP
Entrance – FREE on the south side. 2000 IDR on the north side. 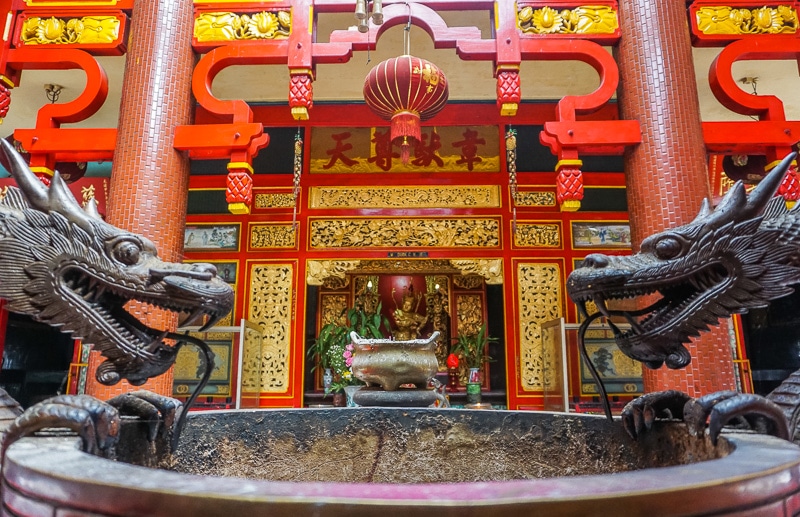 Inside the Chinese Temple

With Malang’s large Chinese population, there are a few Chinese temples in the area. The largest, oldest and most impressive is “Eng An Kiong”. Located in the centre of town, the temple is worth adding to your list of things to do in Malang city. The temple is believed to be 400 years old and its traditional Chinese architecture is ornate from the inside and out.

Unless you’re visiting on a religious day or festival, the temple is a serene place to wander and enjoy the ancient Chinese interior decoration. To add to the ambience, there are dozens of giant candles and incense burning at all times. 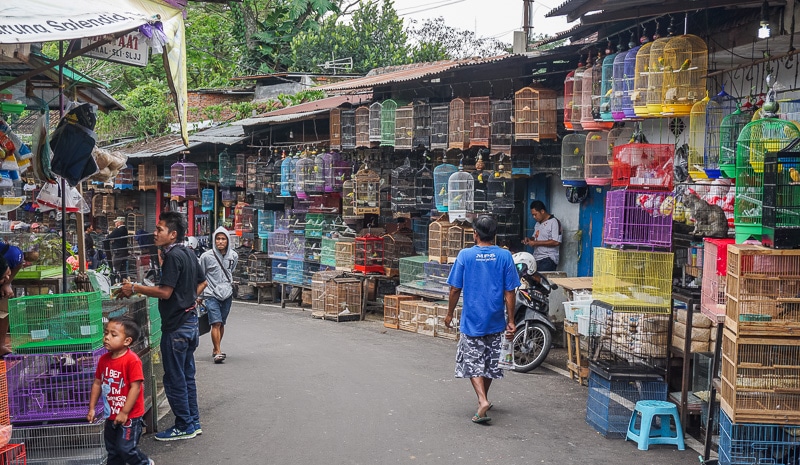 If you’re concerned about animal welfare, we wouldn’t recommend adding the bird market to your list of things to do in Malang city. The bird market was not part of our original Malang itinerary but we ended up walking through it while trying to find the neighbouring flower market.

There’s no doubting that it’s an interesting market and part of Indonesian culture, but seeing such a large number of birds in small cages was not a pleasant sight. The market doesn’t stop at birds either. There are caged domestic cats, rabbits, reptiles and other kinds of pets for sale.

Although not as interesting, the flower market next door is an attractive shopping street for those with green fingers. The street is covered in potted trees, plants and flowers so it’s difficult to tell where one shop ends and the other starts. Even if you have no plans on buying a plant for your hotel room, it’s a pleasant and peaceful place to browse with Malang’s middle class. 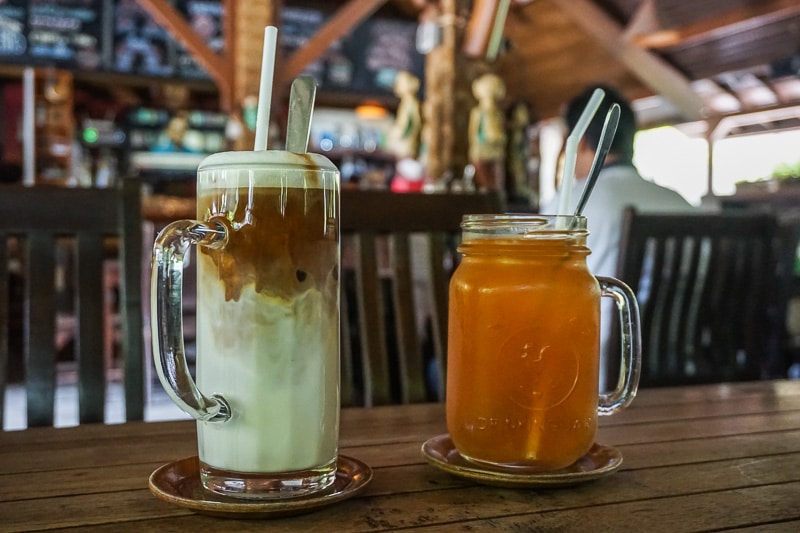 Our Iced Coffee and Tea at Java Dancer

Malang is a university city, so it’s no surprise that with a large student population, there are plenty of coffee shops around. Local Balinese coffee is regarded by many as the best coffee in the world, so drinking it as part of your Malang itinerary is recommended. There’s been a new wave of trendy coffee shops opening up all over the northern part of Malang city.

We recommend the following coffee shops for your things to do in Malang city:

Java Dancer – A small café that blends an ethnic local interior with a contemporary twist. We loved the wooden furniture and open air design which makes a comfortable ambience while sipping their best coffee.

MMMM Coffee – A trendy looking place set inside one of the city’s many old colonial buildings. The cool bare brick interior, air-conditioning and awesome drink selection make it the perfect coffee-break from your Malang itinerary.

DW Coffee – Grab one of their books from the corner of the shop and sit under a fan in this minimal wooden coffee house. The wooden panelled walls and wooden furniture make it almost feel like a homey Scandinavian home. 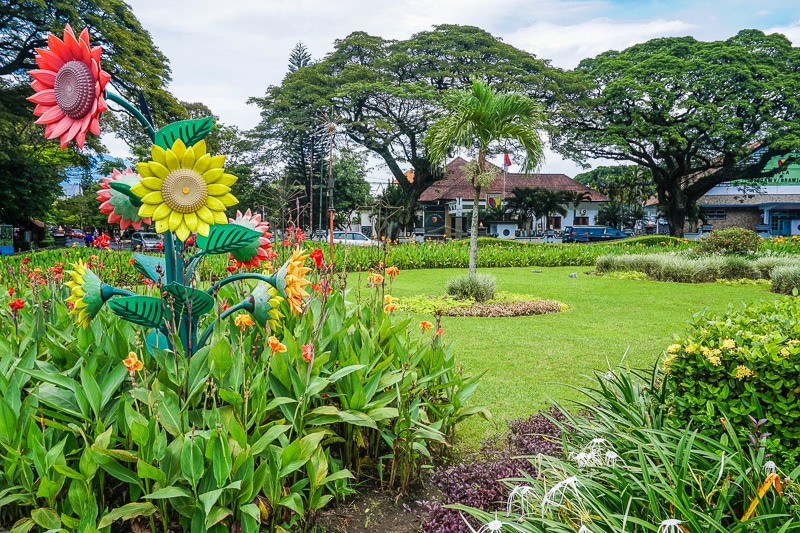 The newly elected Malang Mayor has turned some of the city’s open spaces into pleasant green parks. A lot of effort has gone into creating them into attractive landscaped gardens for locals to escape the traffic heavy streets. The largest and best green spaces for your Malang itinerary are:

Alun-Alun Tugu – The circular park with a central lake is surrounded by Jl Tugu’s ancient forest trees and grand buildings such as the Tugu Hotel and Malang Town Hall. 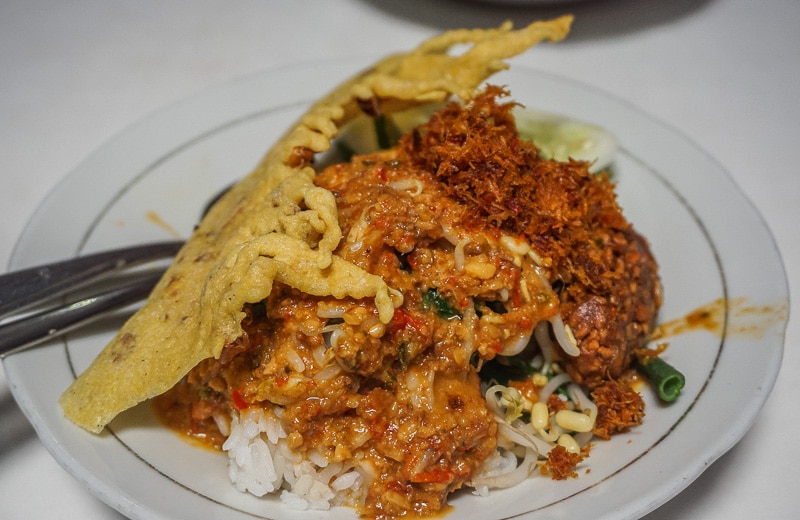 Like most large Javanese cities, there’s plenty of great food on offer at many Warungs and markets. Eating at the many friendly warungs should be on everyone’s list of things to do in Malang city. The best Nasi Pecel (rice with coconut and peanut sauce) we had in Java was at Pecel Kawi and there’s some tasty Gado Gado (rice, vegetables and spicy peanut sauce) to be had along JL KH Ahmad Dahlan.

At night, JL Kyai Tamin comes alive with a local market. Many of the stalls sell local dishes such us Bakso (noodle and meatball soup) and Nasi/Mie Goreng (fried rice/noodle). We didn’t get the chance to try it but Malang is famous for it’s Malang apple strudel. If that’s not a reason to start a Malang itinerary then we don’t know what is! 🙂 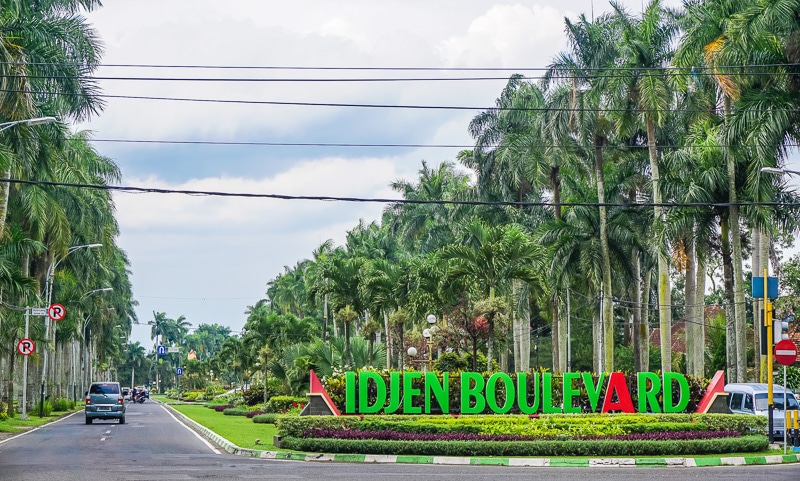 The most attractive street in Malang city is absolutely Ijen Boulevard. The street has the city’s best examples of beautiful dutch colonial houses which were occupied by the Dutch during the Dutch occupation. Because of Malang’s nice weather, the city became a favourite destination for the Dutch and other Europeans who lived in Surabaya.

Adding to Ijen Boulevard’s appeal is an excellently maintained flower garden running all the way down the middle and tall shady palm trees from end to end. While you’re there, make sure to check out the massive Holland Bakery just off Ijen Boulevard on Jl Wilis. You won’t regret adding this to your Malang itinerary!

In places, Malang City doesn’t make a good first impression. Some streets are untidy and dirty while others felt almost unsafe at night due to poor street lighting. But with all the things to do in Malang city within walking distance of each other, it’s an easy city to visit and a worthy stop to break up the monstrous road trip from Yogyakarta to Mount Bromo. You can also add a tour to Mount Bromo to your Malang itinerary. They leave at 1am and return at midday the next day. These can be booked through Mador Malang Hostel.

4 thoughts on "Things To Do In Malang City: Our Malang Itinerary"