Kampung Code: Our Tour Of A Yogyakarta Slum

With bright green rice fields, steaming volcanoes and soaring mountains, Java is a gorgeous country. When surrounded by so much natural beauty, it’s easy to forget about the country’s people. But it’s important not to. The Javanese are some of the friendliest people we’ve come across and a big part of our enjoyment while touring the country was meeting many of them. From rural villages to gigantic cities, wherever we went, the local people made us feel welcome. This was especially the case while visiting Kampung Code in Yogyakarta, Central Java.

Kampung Code is a village neighbourhood which runs along the banks of the River Code in Yogyakarta. Kampung Code began its life as a refuse dump, then later, Yogyakarta’s poorest people began to build homes amongst it. Homes were made from whatever they could salvage. Most were cardboard boxes covered with plastic sheets which didn’t last long when the heavy rains poured. 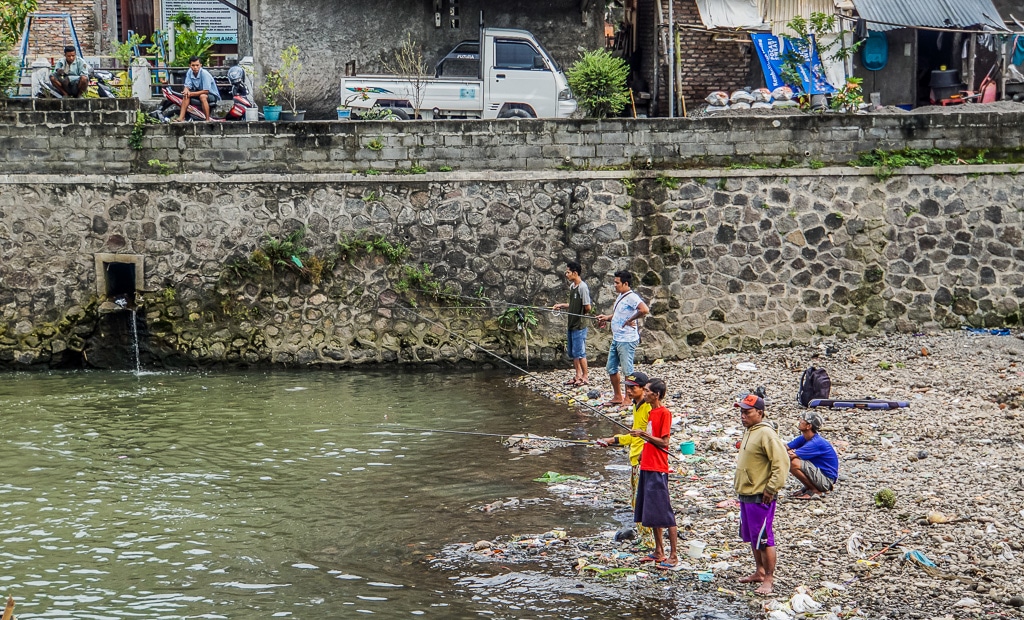 Men fishing for fun and for food on the River Code

For years, Kampung Code was a notorious slum area. Living conditions were dire and crime was rife. Then in 1983, the Government had plans to demolish the entire village. These plans were stopped by community leader Willi Prasetya, and former Catholic priest, Yousef B. Mangunwijaya. The two men persuaded the government, along with financial help from two newspapers, to instead, upgrade Kampung Code. That same year, design and construction commenced. 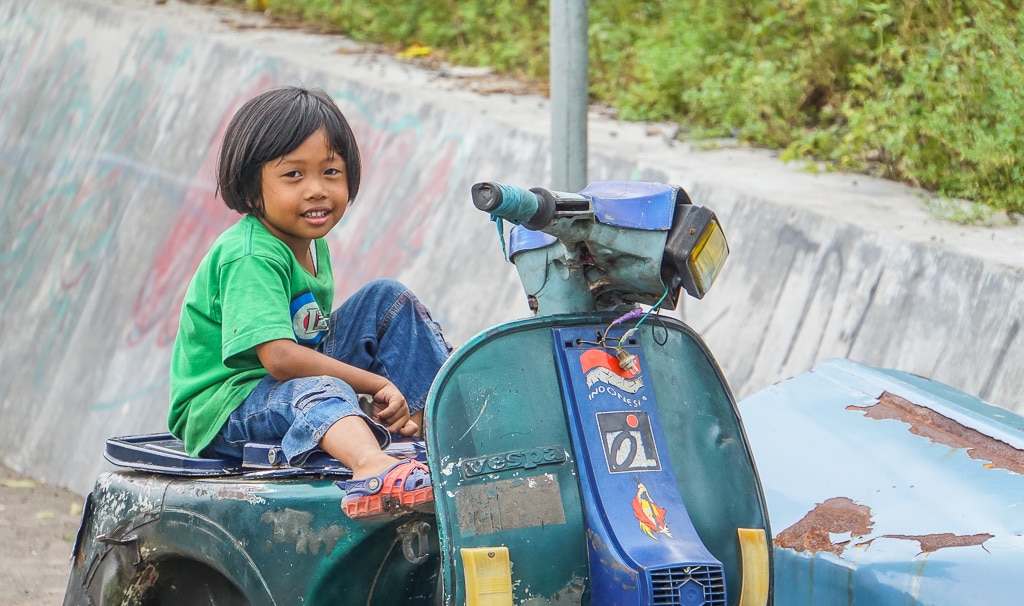 Few professional builders were employed, as most of the construction was completed by volunteers and the Kampung Code tenants. Homes were built from a mixture of materials on top of the refuse that had been compressed over many years. Wood and bamboo were used for walls and corrugated iron for roofing. The upgrade was complete within two years and since then, the living conditions in Kampung Code have continued to improve with government funding. Today, the majority of buildings are made from brick and concrete like any other home in the city.

Our Tour Of Kampung Code, Yogyakarta 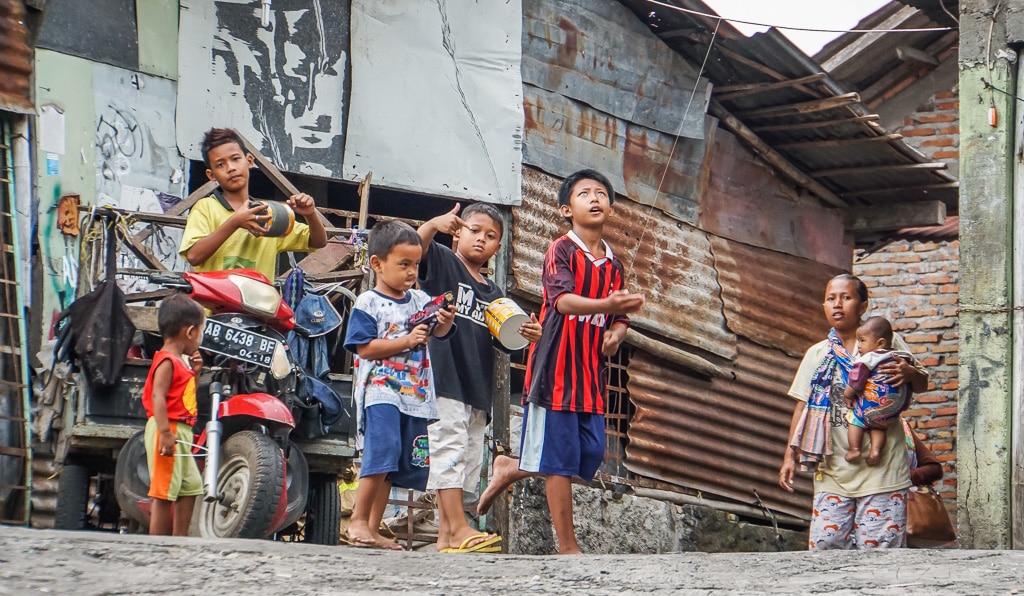 Group of kids in Kampung Code

Fefe, our excellent tour guide from Via Via Tours, started our 4-hour walk through Kampung Code by showing us a neighbourhood map upon an external wall. Unlike the western world, many Javanese live in one place for their entire lives. Once a family home has been built, the most likely scenario is that the family will remain in that home for decades. Owning a home in Java is no easy feat, so it’s no surprise they don’t want to leave. 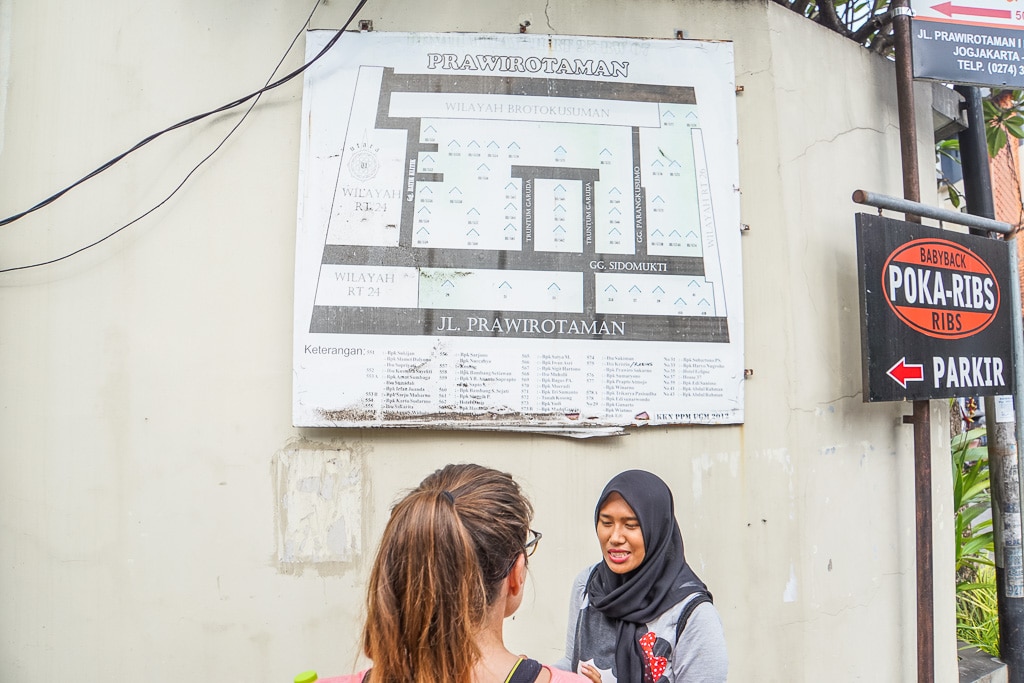 Our guide, Fefe, showing us a neighbourhood map on the way to Kampung Code

This long-term residency enables these neighbourhood maps to be created. Each house is given a number and the family name who live within them is printed underneath. The maps can be accurate for many years or even decades. They’re mostly used in large city neighbourhoods so visitors can find their way and deliveries can be made without error. These maps are not used in rural areas or smaller towns because like back home in England, everybody knows everybody, so they can give directions. 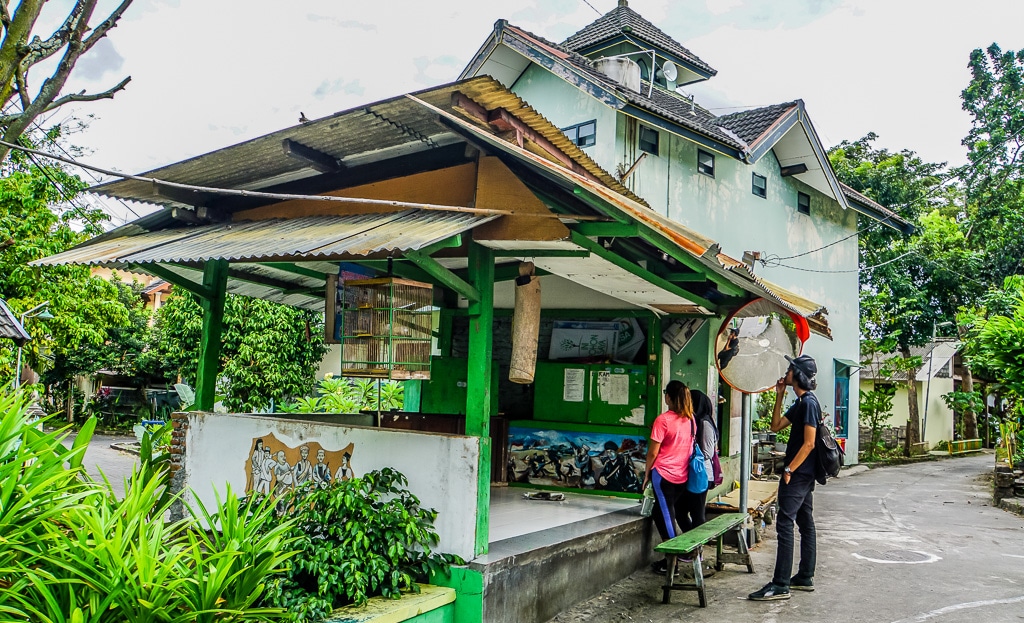 Crime is not the only reason for security posts. Natural disasters can strike at any moment so it’s the guard’s responsibility to warn the residents if the River Code is about to flood, a nearby volcano has erupted or an earthquake is possible. 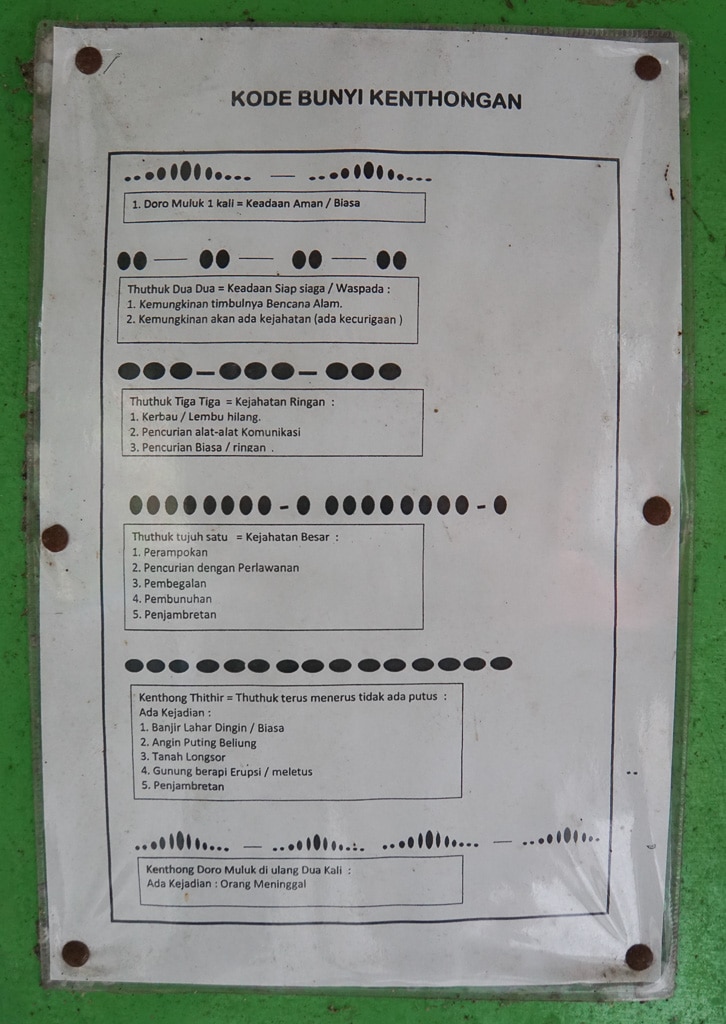 The guard warns residents by hitting a wooden tube with a stick which resonates throughout Kampung Code. Like morse code, they use specific rhythms for different types of crimes or natural disasters. 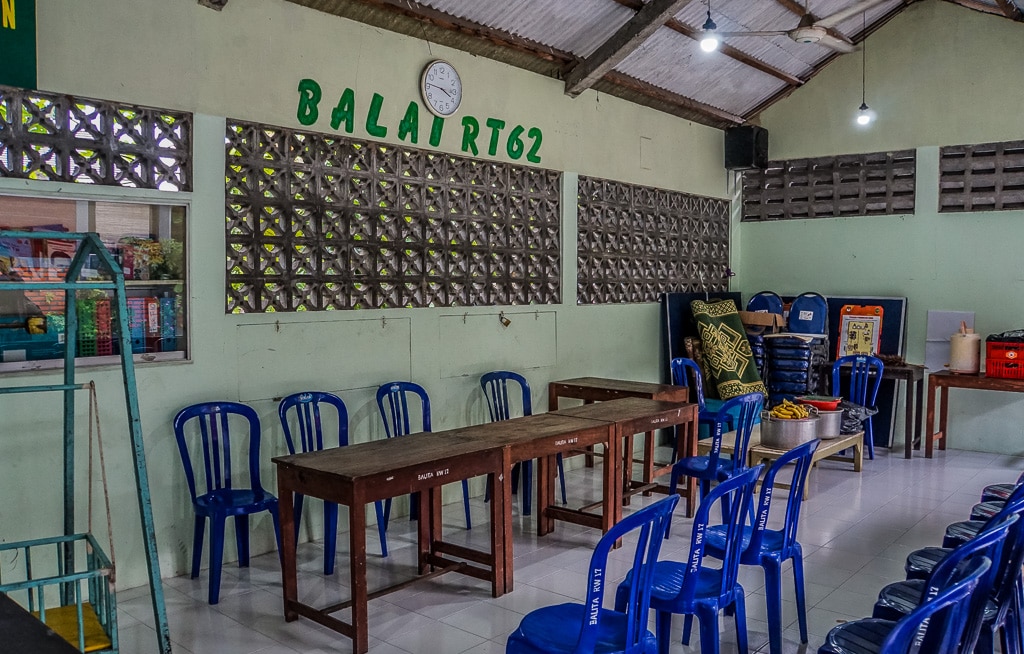 We arrived at a village hall which was about to hold one of its many community events. Today would be the day that mothers bring their babies for a health check. Old weighing scales were being set up and vitamin rich foods prepared, which would be handed out to Mothers to feed their babies.

The village hall in Kampung Code is used for a variety of other events such as after-school learning for children and voting during elections.

Kites In The Sky 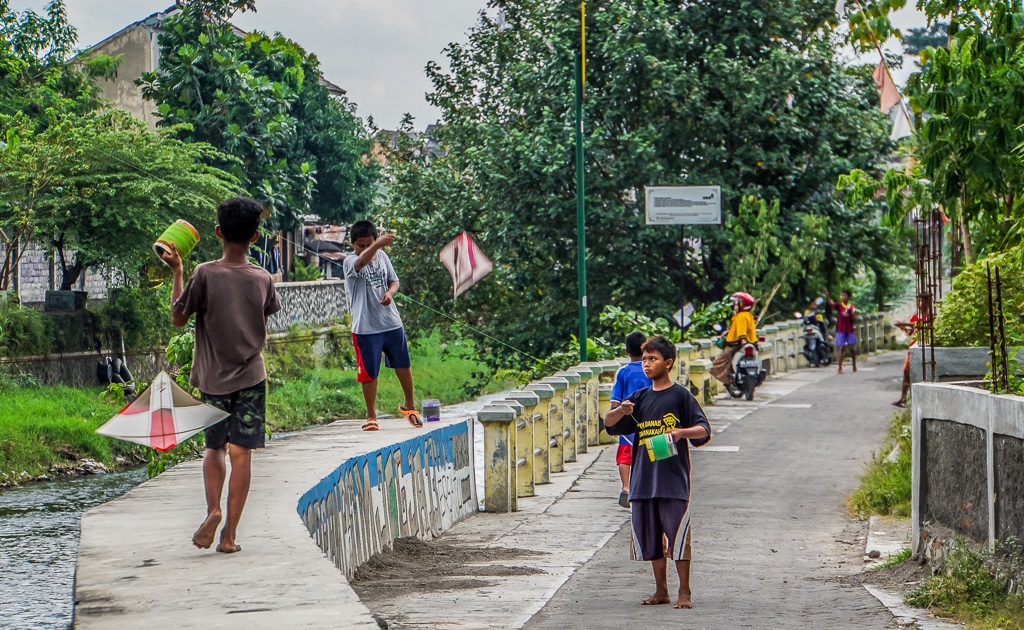 Kids with their kites

A huge hobby for kids in Kampung Code and all over Java is kite flying. During the late afternoons, kites can often be seen in the skies. Some are flying kites purely for fun but some kids battle with one another by attempting to cut their opponents kite line with their own. This game is in fact, popular in many parts of Asia. 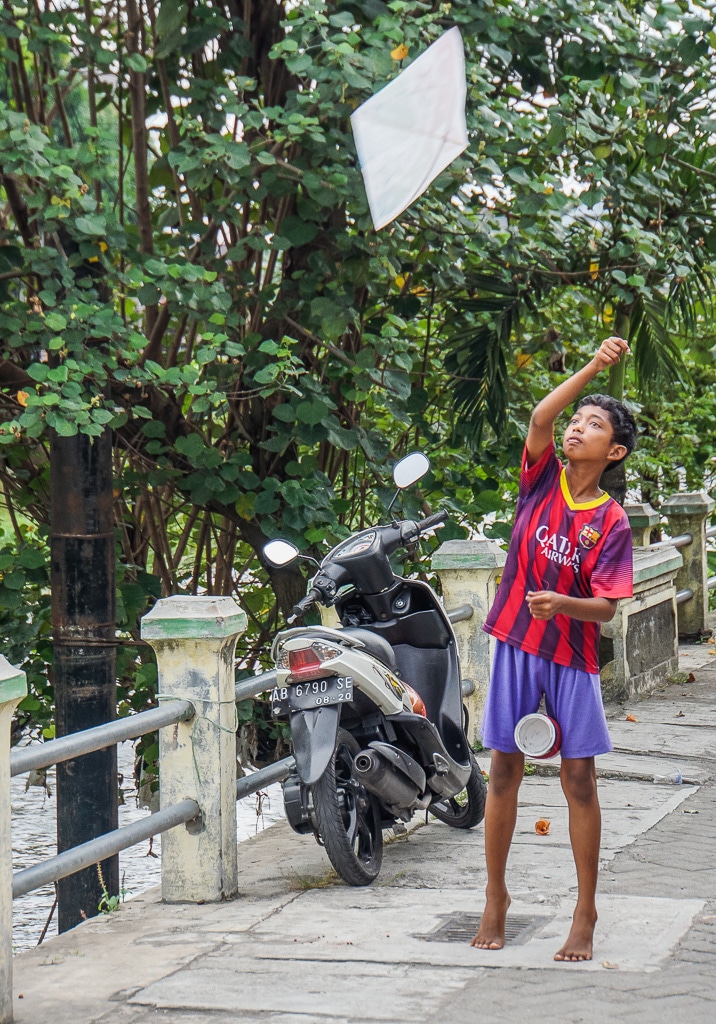 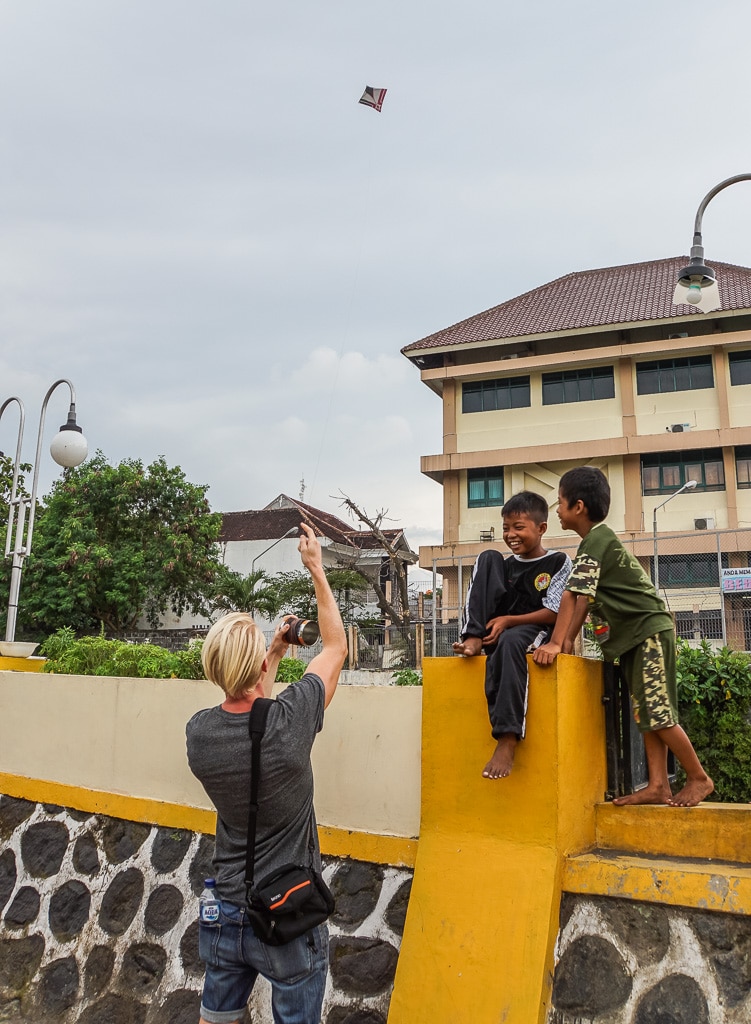 Having a go at kite flying

There were dozens of kids flying kites along the river banks of Kampung Code while we were there. The kids were proud to show us their skills and one let me have a go. Just us my kite was about to hit the river water, the boy grabbed the line back and excellently elevated it back into the sky. What a pro!

Weddings For Up To 1000 People 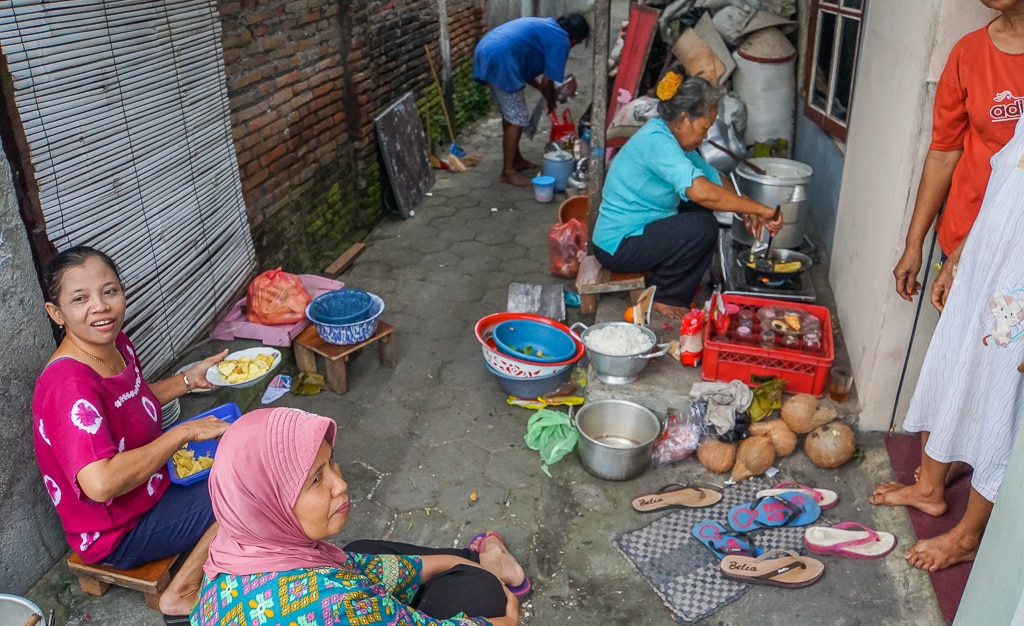 The women cooking for a wedding the next day

The highlight of our stroll through Kampung Code was stumbling across a group of women cooking together down an alley. When we asked what they’re doing, we discovered that they’re preparing for a wedding the following day. The majority of Javanese can’t afford expensive caterers, so instead, the female family and friends of the bride and groom gather to cook a wedding feast. Sometimes enough for 1000 people! 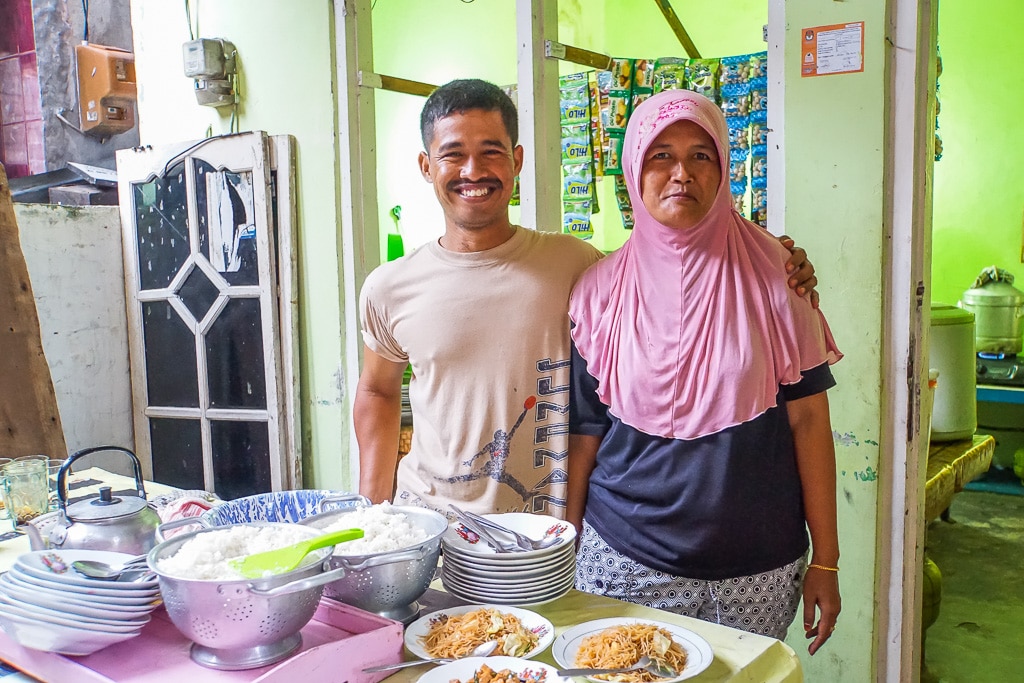 The proud Father and Mother of the Bride

These particular women were making a mountain of rice, tempeh (like tofu but made from soya bean) and palm leaf wrapped treats consisting of steamed rice flour with banana inside. We’d tried these delicious sweet treats before but enthusiastically accepted their offer to try one. 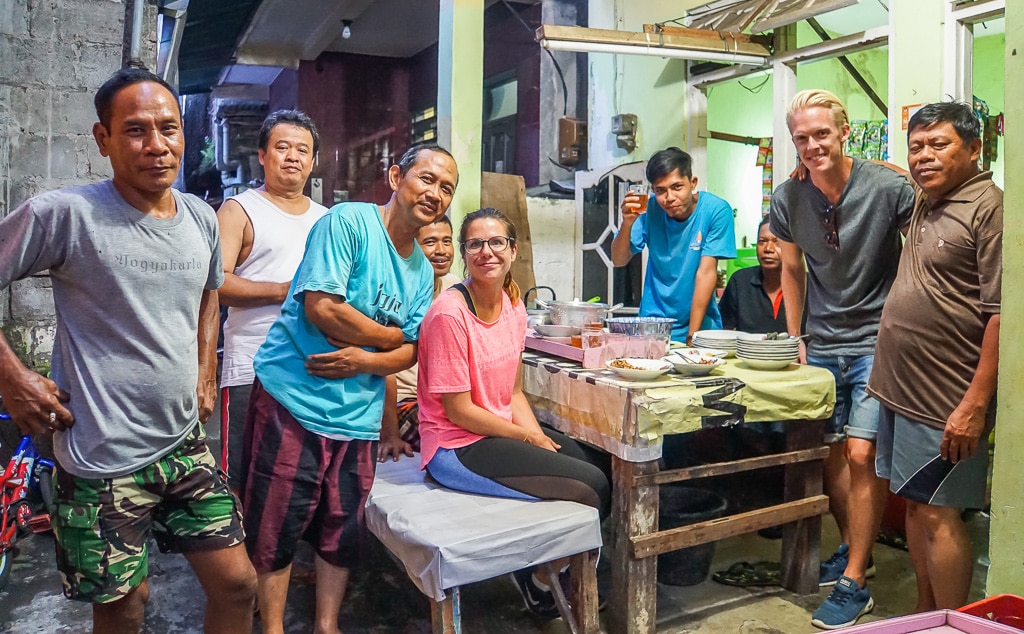 The men who invited us for dinner

They showed us the simple hall next door which would be used for the wedding and reception. The men of the party were doing the physical work by setting up the hall and it wasn’t long before we were invited to join them for dinner. With the men, we enjoyed rice, noodles, tempeh and tea that had been lovingly prepared by the women. Fefe, our guide, translated where we were from and as usual, we got the “Wayne Rooney!” response when they learnt we’re from England. 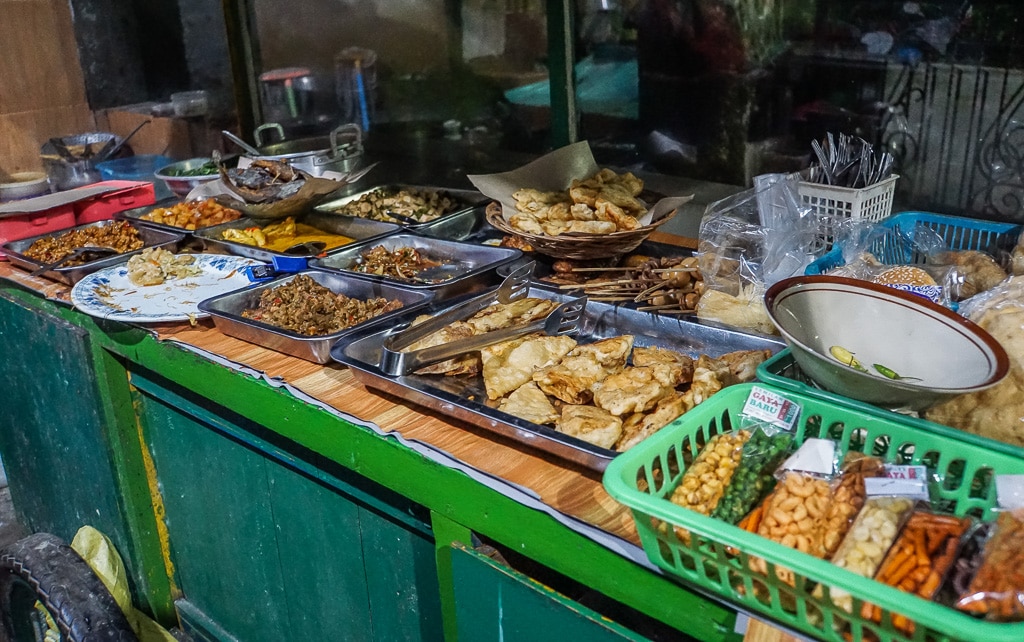 The food available at the local eatery

As it started to get dark, Fefe took us to a local eatery to see some local food. The small eatery, that looked like something between the owners living room and a restaurant, is used by many Kampung Code residents. It’s a place locals go to catch up with friends and talk about things such as politics without the worry of an outsider listening in.

The food is laid out in trays like a buffet and locals kept coming and going with takeaway meals to eat at home. As each person passed us at our table, they all smiled and said hello. It’s here where we were surprised to learn that today, the residents of Kampung Code are still looked on as a lower class. To us, they seemed no different to every other Javanese person but Fefe explained that signs such as women smoking in public and rude language are giveaways to such a community. 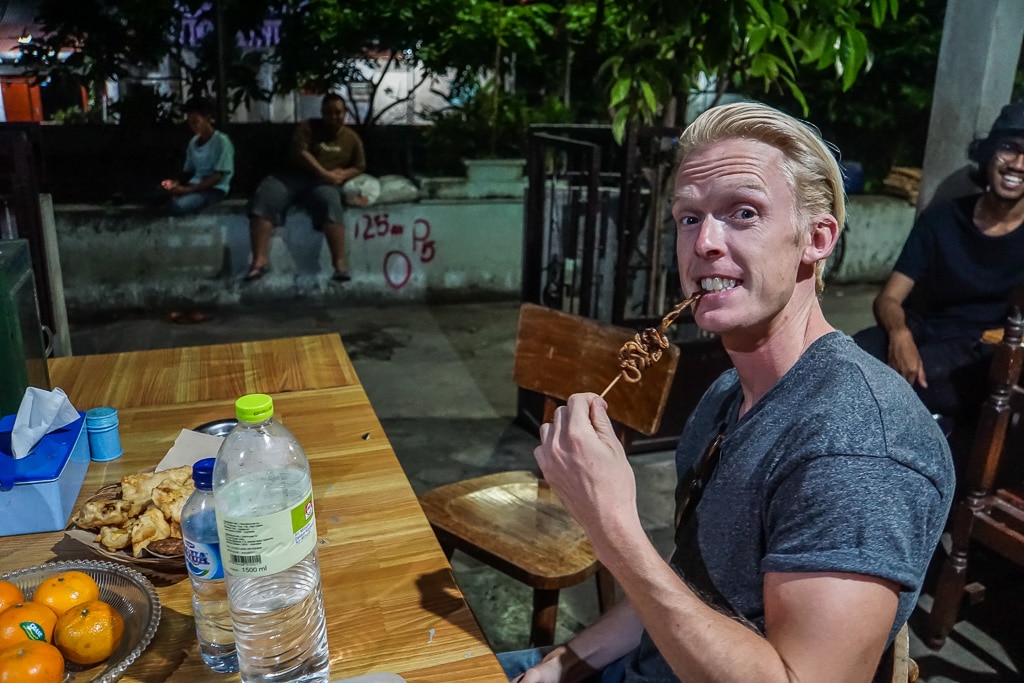 We got to pick a selection of mostly fried foods from tofu to banana. We even had the courage to try chicken intestines! Served on a cocktail stick, they were actually pretty tasty! 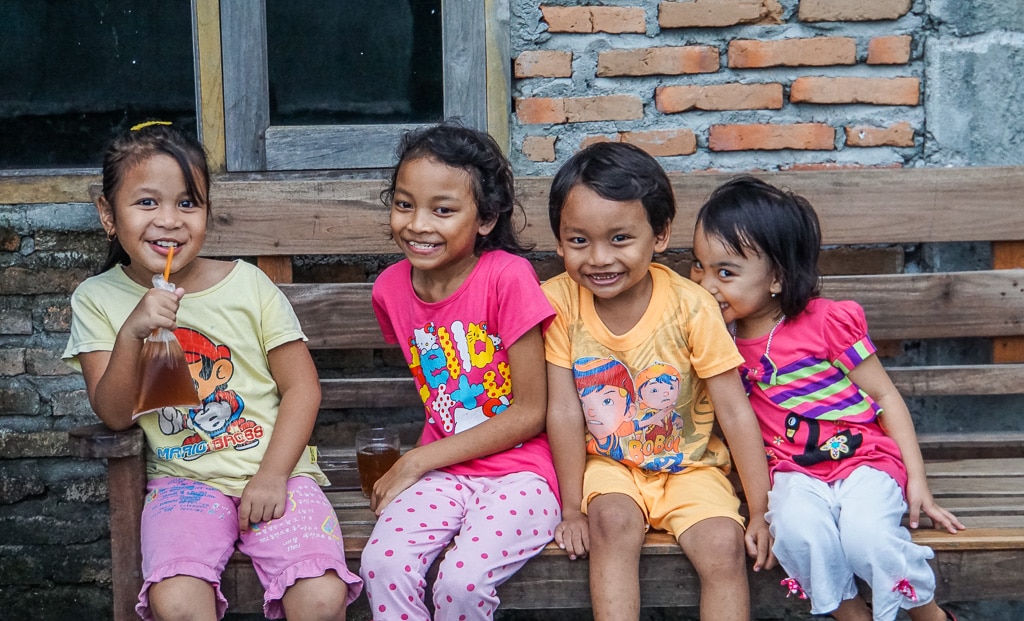 Young girls smiling for the camera

The sound of a storm was getting closer so at this point we called it a night and headed back to Via Via Tours’ office. Exploring Kampung Code was such an awesome experience. We’d previously visited rural village communities in Java but to see a village within a large city like Yogyakarta was different and just as rewarding. 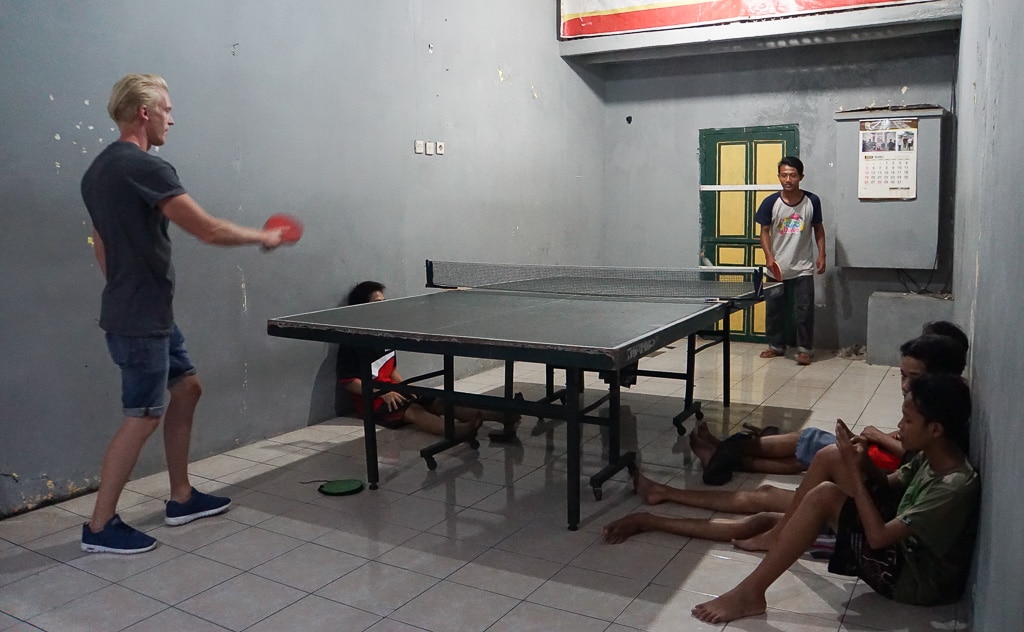 Joining in for a game of table tennis

Everyone was super friendly and welcoming, even though we had no common language. Kampung Code may have used to be a slum, but it was nice to see everyone living in much better conditions today. There was no awkward feeling of two white tourists’ pitty prying eyes on poor slum dwellers. 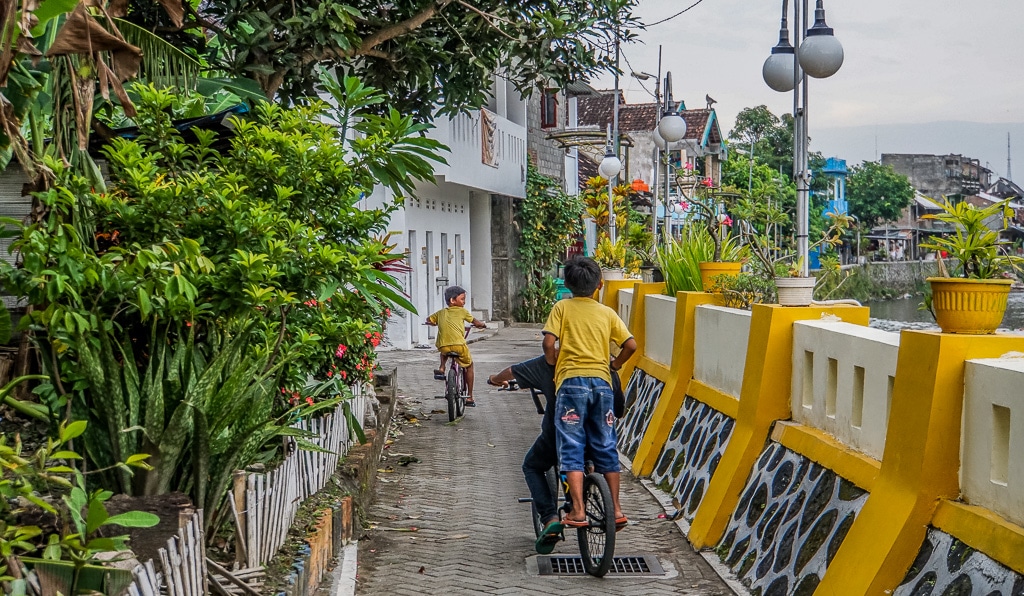 Kids on bikes in Kampung Code

Fefe was an excellent guide and continuously fed us with interesting information about kampung Code for the full 4 hours. Too much information and too many photos to fit in this single blog post. It ended up being a 5 hour tour after spending lots of time with the wedding party. Even Fefe said we were very lucky to experience that.

3 thoughts on "Kampung Code: Our Tour Of A Yogyakarta Slum"