The Dieng Plateau is a unique volcanic region in Central Java. Rolling green hills, multi-coloured lakes and bubbling pits of mud. All surrounded by views of nearby mountains and volcanoes. The diversity of the landscape makes the area very different to anywhere else in Indonesia. Though unless you visit in peak season, few travellers explore Dieng Plateau. We visited during low season, so with few other travellers around, we felt like intrepid explorers!

At 2000 meters above sea level, the Dieng Plateau is in fact, a caldera, formed by the eruption of ancient Mount Prau. A caldera is a volcanic feature formed by the collapse of a volcano into itself. So basically, although now instinct, the Dieng Plateau is one giant volcano crater! In may be instinct, but there’s still plenty of geothermal activity. 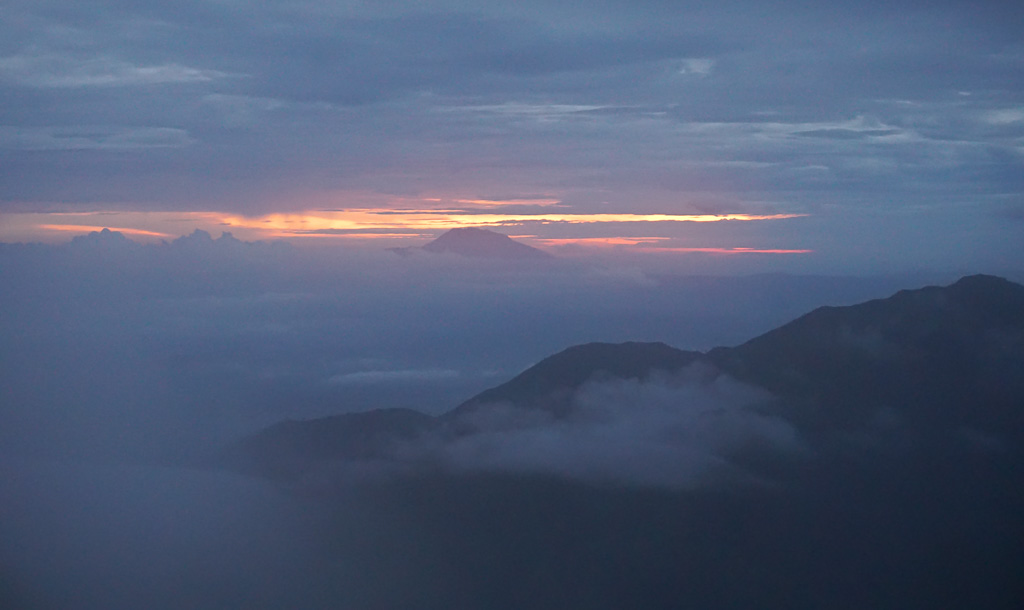 Although you can see the Dieng Plateau sunrise as a tour from Yogyakarta, we based ourselves at Wonosobo for a couple of nights. Being just an hour from Dieng, this meant we could sleep for an extra couple of hours before setting off. We still had to set our alarm for 2:30am for a 3:00am pickup. Our taxi was a few minutes late, so at 3:20am, we drove into the darkness towards Dieng.

It took around 40 minutes for our taxi to reach the foot of the path that leads to the top of Sikunir Hill. At 4:00am, it was still dark and pretty cold. The coldness was a bit of a shock to the system because we’d remained in tropical climates for the past 7 months. However, we were prepared by wearing several layers of clothes.

The hike to the Dieng Plateau sunrise viewpoint at the top of Sikunir Hill takes 20-30 minutes. We first passed a few huts selling hot tea and coffee to visitors making the ascend. As tempting as it was, we decided to continue to the top to make sure we got a good spot. The path was in total darkness so we used our iPhone torch apps to help us navigate the steep steps. When we got to the top, there were just 20 or so other people there. All Indonesian, so we got the usual stares as if they had never seen a white person before. 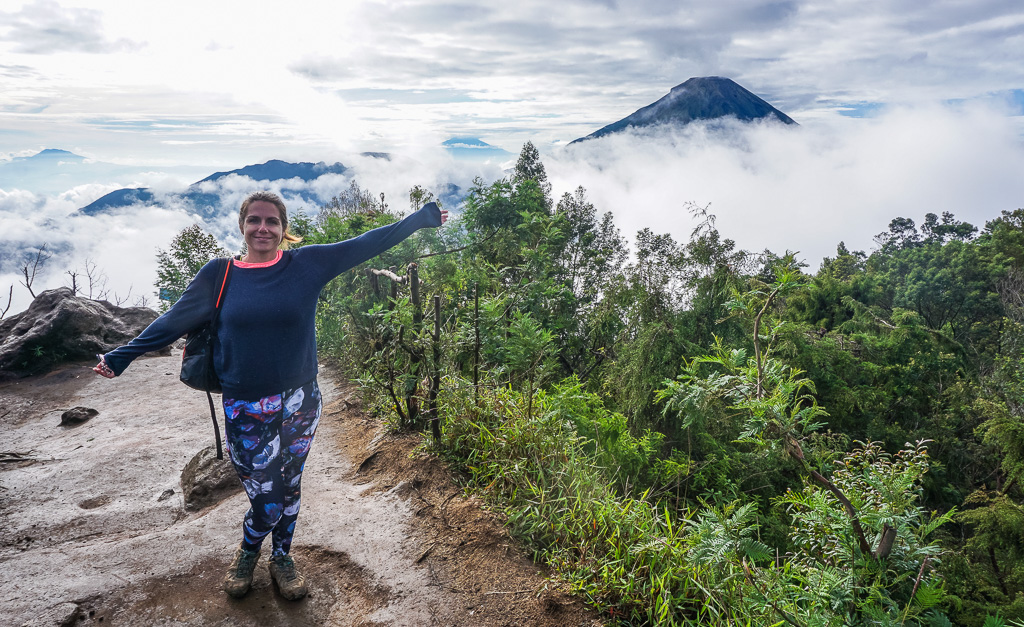 Almost to the top of Sikunir Hill (post sunrise)

The view was epic. A bit of cloud but clear enough to see the twinkling lights of villages down below and 3 to 4 silhouetted volcanoes. On a clear day, you’re supposed to be able to see up to 8 volcanoes! 5 minutes later, some low mist started to roll in, covering the lower land villages. This was fine, we expected this from what we’d read online and the peaks were still visible. But few minutes later, we too were engulfed by cloud at the top of Sikunir Hill.

The clouds kept coming, so we couldn’t see a thing for the remaining few hours of the Dieng Plateau sunrise. Every now and then, for just a few seconds, the clouds would break to allow a small window view of one or two peaks, but that was it.

The clouds did disappear shortly after sunrise so we were able to get a handful of photos, but nothing compared to the beauty of what’s possible from the Dieng Plateau sunrise viewpoint. 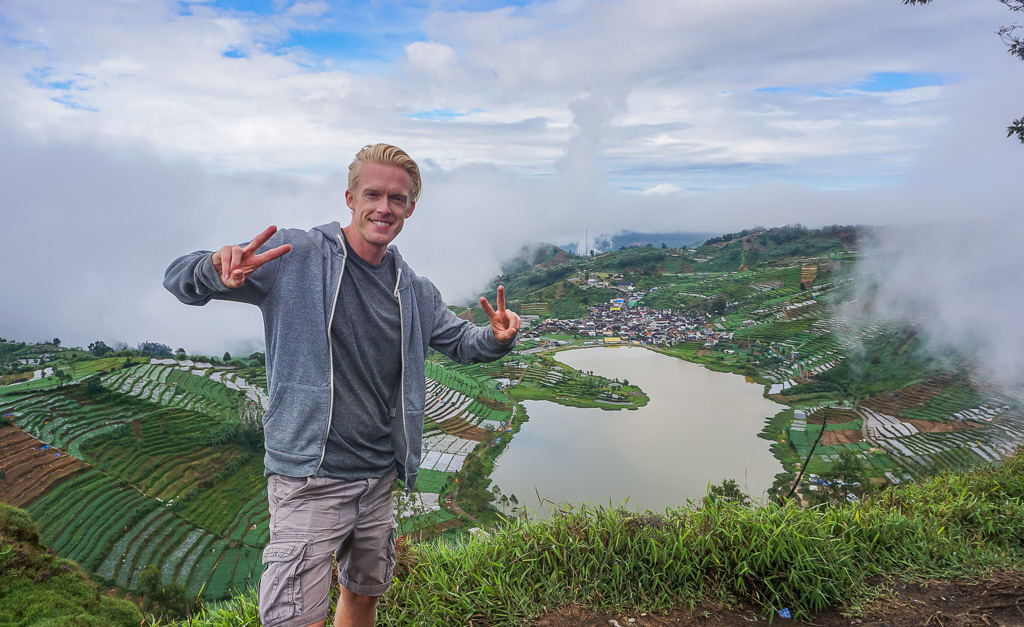 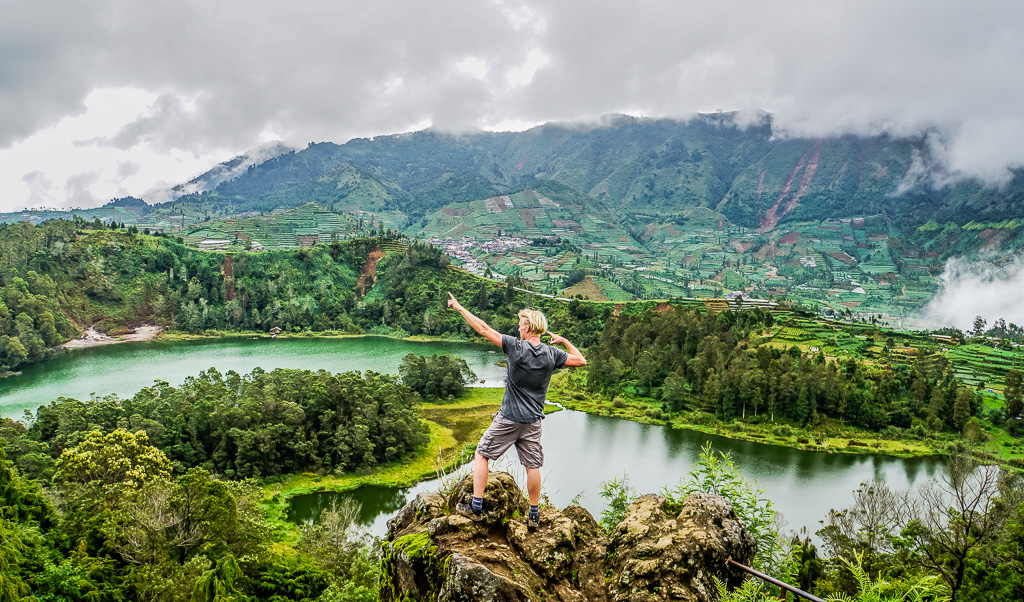 At the Telaga Warna Lake viewpoint

From the top of Sikunir Hill, we walked all the way to Telaga Warna Lake after the Dieng Plateau sunrise. Telaga Warna Lake, or ‘Colourful Lake’, contains water that can change in fluctuating colours. At times it can be green, purple, yellow or even taking the colours of the rainbow! This phenomenon occurs because of its high sulphur content which reflects in varied colours when the sun hits the water.

It takes around 1.5 hours to walk from the top of Sikunir Lake to Telaga Warna Lake. After a coffee at the foot of the hill, we walked through many potato farms and villages, finally in the sun! The friendly locals smiled and waved as we passed. Again, we were the only foreigners around and the only tourists walking this route.

We kept walking straight on the main road until we reached the big sign for Dieng Theatre on the right. It’s then a quick 10-minute incline to reach the theatre. From the theatre car park, after paying 30,000 rupees per person, we walked to the Telaga Warna Lake viewpoint on top of a huge rock. 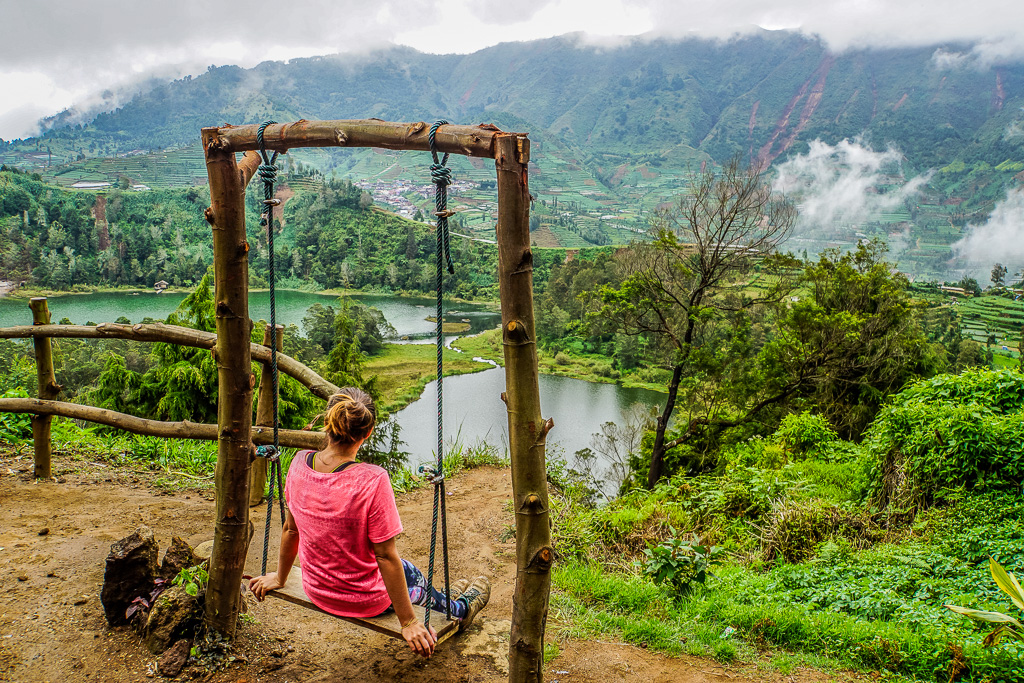 The view was great, but with a new band of cloud covering the skies, we didn’t get to experience any magnificent colours. There’s also a small swing bridge to an even higher viewpoint but there’s an extra fee to pay. 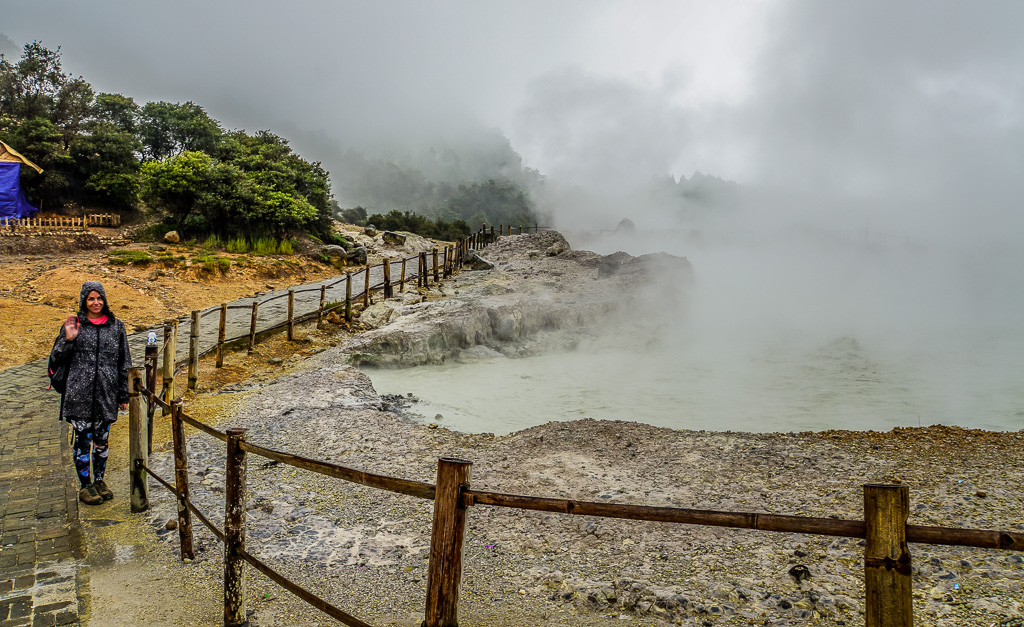 At the very steamy Sikidang Crater

One of the highlights of Dieng Plateau is Sikidang Crater. The walk from Telaga Warna Lake to Sikidang Crater took us around 30 minutes. There’s an entrance fee of 30,000 rupees but this also includes entrance to the Arjuna Temple complex which is the next stop on this Dieng Plateau Sunrise and DIY Walking Tour.

Sikidang Crater is an open sulphur crater with angry bubbling mud and bellowing steam. It’s set amongst a bumpy and dusty landscape that made us feel like we’d arrived on another planet. The sulphur stinks like rotten eggs and depending on the wind, you can smell it in many parts of the Dieng Plateau. 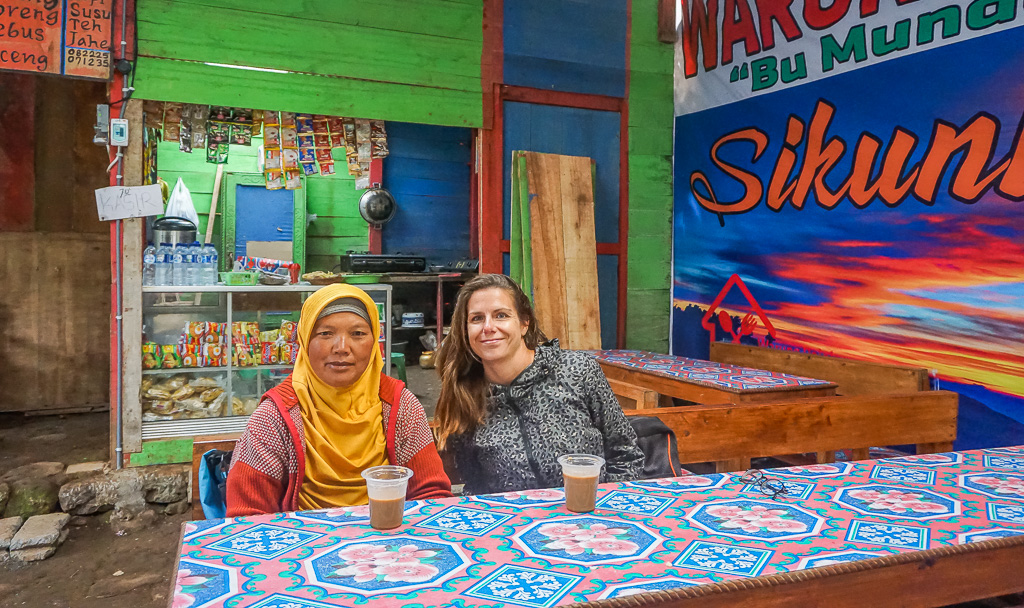 Unlike the previous Dieng Plateau sites, the Sikidang Crater area is spoilt by many tatty market stalls selling unappealing tourist souvenirs. We also noticed some awful looking statues of gorillas and monsters currently being erected amongst the landscape. These are clearly targeted to local tourists who enjoy these type of selfie taking spots. 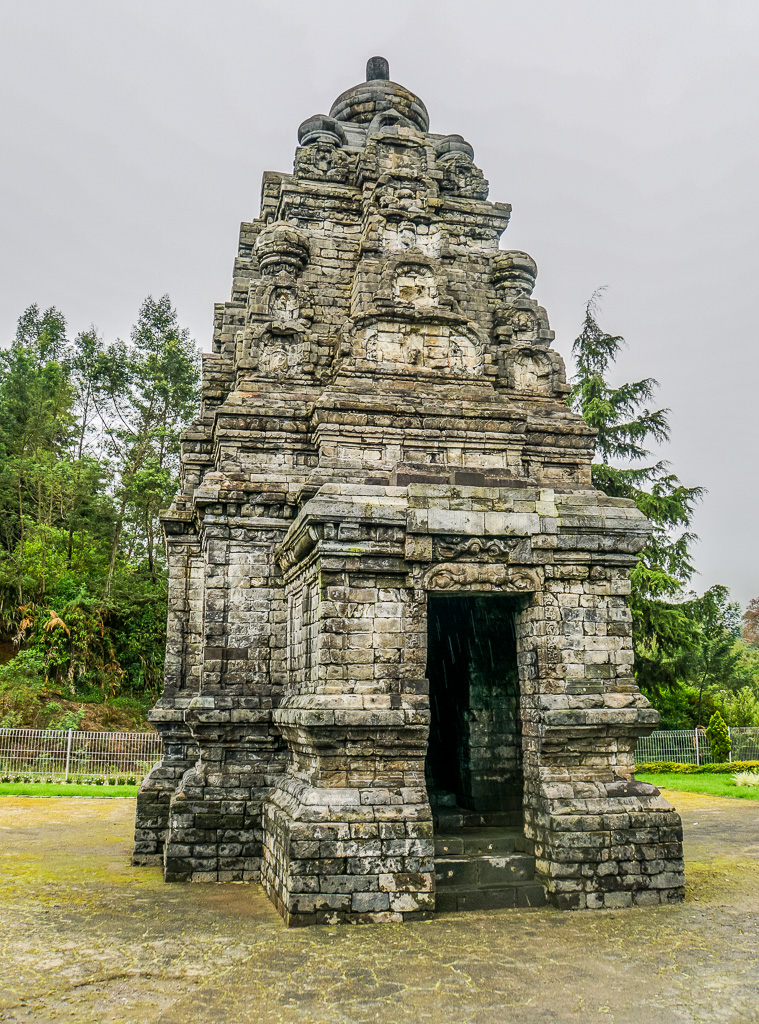 One of the Dieng Plateau’s many Hindu temples

Another popular Dieng Plateau highlight is the Arjuna Temple Complex. The walk from Sikidang Crater to the Arjuna Temple Complex took 30 minutes. The complex is located in a large park on the edge of Dieng village in the centre of the valley. It houses eight small Hindu temples that date back to the seventh century. They may not be as impressive as Prambanan or Borobudur, but they’re some of the oldest surviving temples in Java.

The rain was pouring by the time we reached the Arjuna Temple Complex so we didn’t stay long. We simply walked through the site to gain access to Dieng Village to catch our return public bus to Wonosobo. Many of the temples seemed to be in a state of repair. Many ancient bricks were laid out on the floor, ready to be rebuilt. We assumed the damage was from the 2006 earthquake. 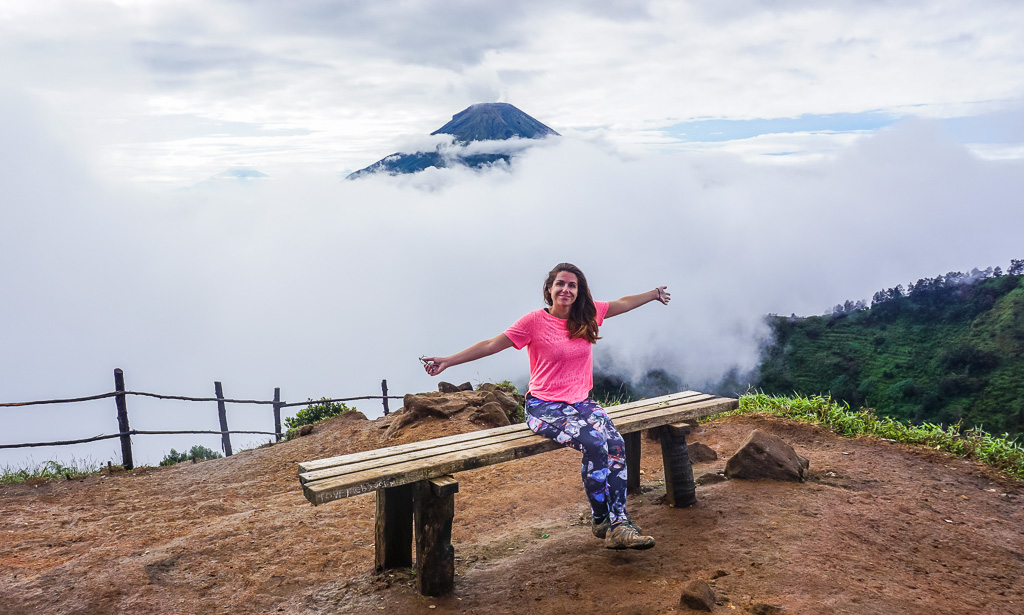 The Dieng Plateau is beautiful and the Dieng Plateau sunrise potential is off the scale. Unfortunately for us, we chose a day with bad weather conditions so we did not get to see it at it’s best. The next day we woke to blue skies so was just very unlucky timing. But making our own DIY walking tour made the experience enjoyable still. We may have failed to see the best Dieng Plateau sunrise and got soaking wet in the rain, but the experience of walking through the local villages in between sites made it all the better. We would have missed out on this if we did as most people do and book on an organised tour.

Would we try again in rainy season? Maybe not. But follow our tips in this post and you should have a fantastic time exploring the Dieng Plateau by yourself.