When travelling around the Philippines, it’s so hard to decide which islands to visit and explore. There are over 7600 of them and they’re still counting! Madness! Many of the easier to get to islands are getting crowded with tourists and development is spoiling the beauty. We experienced this first hand in popular areas like El Nido and Bohol. But there are islands, not too far from the well-trodden path, that aren’t visited by too many tourists. These islands can allow for an untouched Philippine paradise experience. Bantayan Island is one of these destinations.

Where is Bantayan Island? 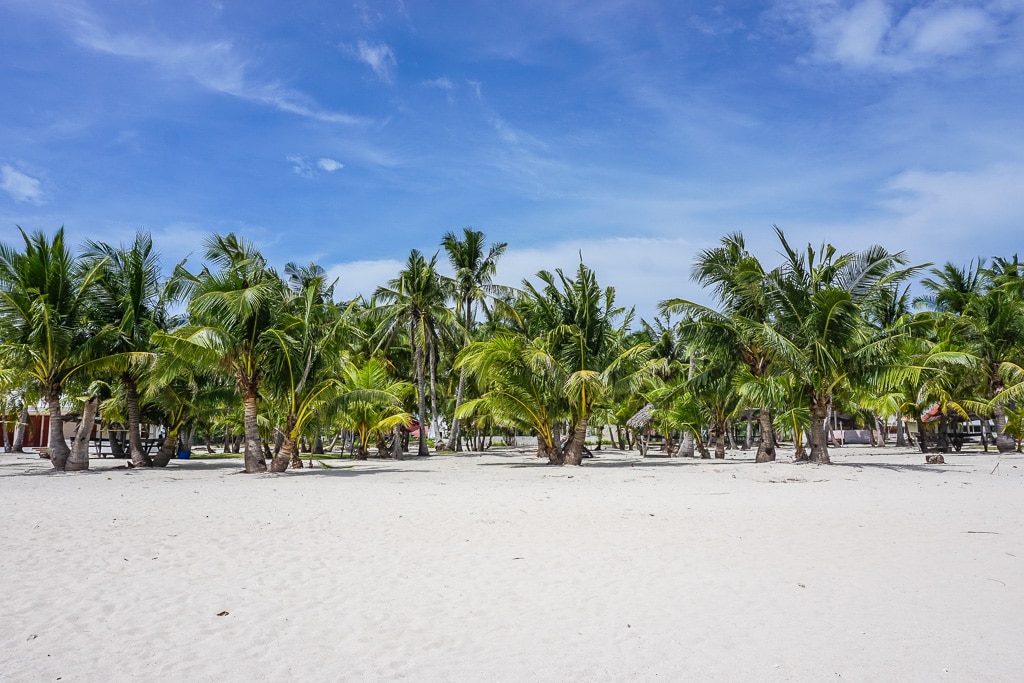 Bantayan Island is situated to the north-west of Cebu Island in the Visayan Sea, Philippines. It’s the largest of the Bantayan Island group that lies close to the geographical centre of the Philippine archipelago. The closest large city would be Cebu at around 140KM away. Being easily reachable from Cebu city, a Bantayan Island itinerary should be considered by all visiting the Cebu area.

How To Get To Bantayan Island 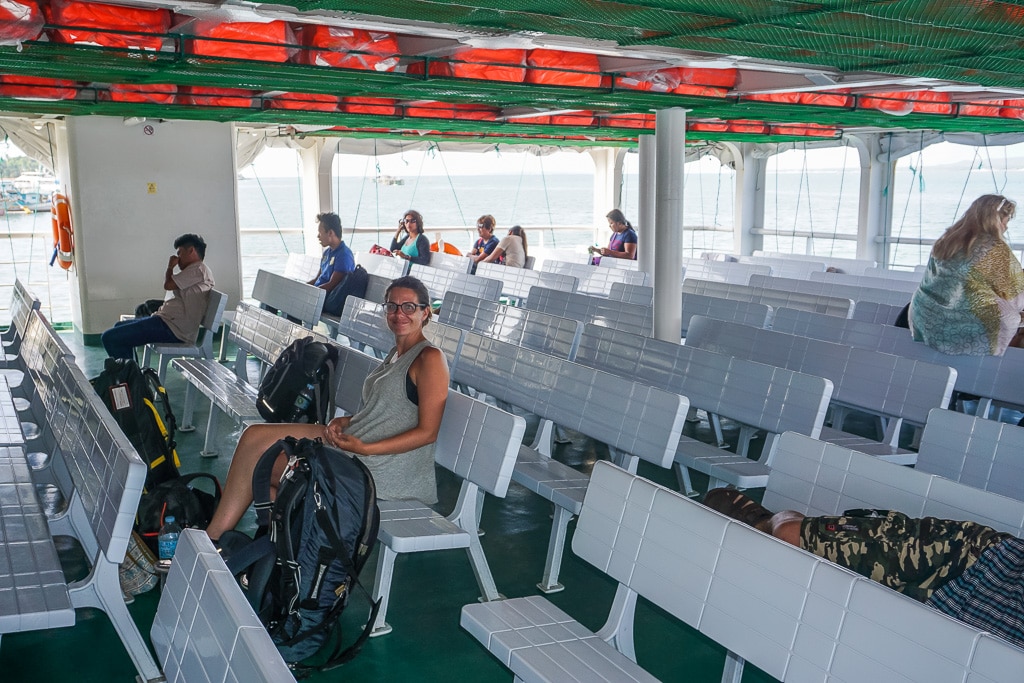 The Island Shipping ferry from Hagnaya to Bantayan Island

A – Fly to Cebu
With Cebu being the closest large city with an international airport, you’ll first need to make your way there. If you’re already in the Philippines, there are a number of domestic flights to Cebu including from Manila, Peurto Princesa (Palawan) and Boracay.

C – Find the Ceres Bus Company (Big Yellow Buses)
The Northen Bus Terminal isn’t very big, so once you’re there, you’ll easily see the Ceres buses. Just look for the bright yellow buses on the right side as you enter the terminal.

D – Board the next bus to Hagnaya
Hagnaya is the ferry port you need to head to for Bantayan Island. The bus ride lasts for 4 hours and costs 160 pesos (air conditioned) per person. These buses run all day but bear in mind that the last ferry from Hagnaya to Bantayan is 5pm. 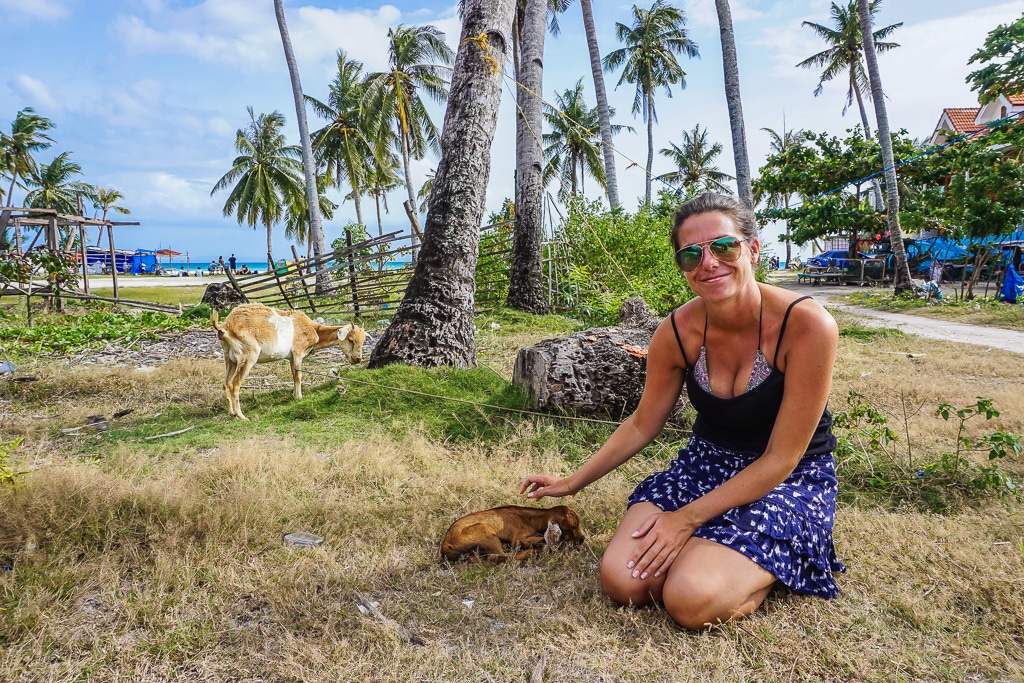 The island has three main towns; Bantayan, Madridejos and Santa Fe, but Santa Fe is the only town with tourist amenities such as accommodation, restaurants and nice beaches. For this reason, add staying in Santa Fe to your Bantayan Island itinerary. Santa Fe is incredibly convenient as the ferry from Hagnaya pulls into the town’s pier. From the Santa Fe pier, it’ll be a quick tricycle ride or walk to your accommodation. 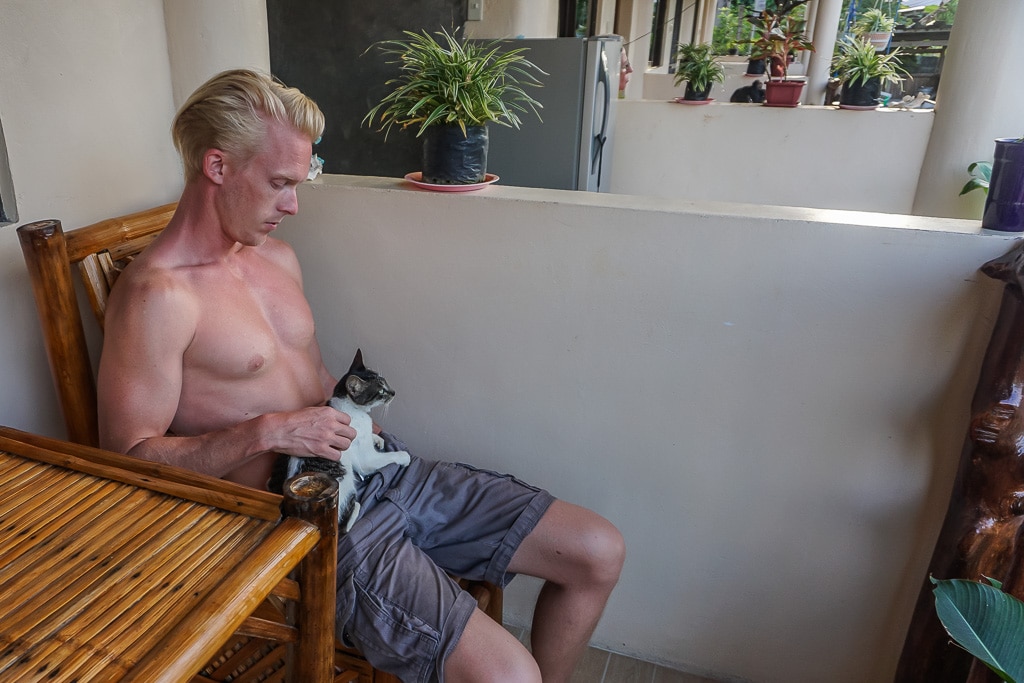 Playing with the many cats at Sunshine Bantayan Garden Resort

We can recommend Sunshine Bantayan Garden Resort:
– Amazing and friendly staff.
– Super clean and spacious rooms.
– Close to the best part of Santa Fe beach and main street for restaurants and bars.
– Free pick up from Santa Fe pier.
– Lots of cats and dogs to play with. 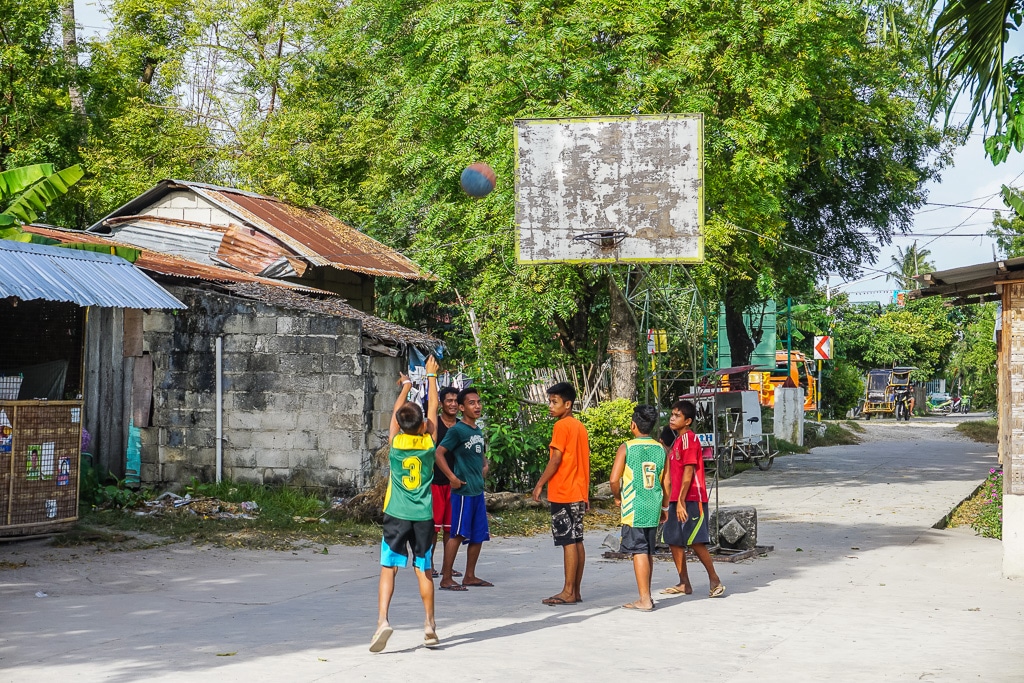 We really liked Santa Fe as a town. Even with a growing number of tourists, Santa Fe has a great local buzz and friendly atmosphere. Kids can be seen riding around on bicycles, collecting shells on the beach and playing basketball on the streets. We’d get plenty of welcoming “hello”‘s and waves as we’d pass them.

There aren’t too many tourists coming here yet, so the vibe is low key and very relaxed. During the day, the streets and restaurants would be quiet with just a few wandering tourists and beer sippers. In the evening, it would be slightly busier, but still laid-back. 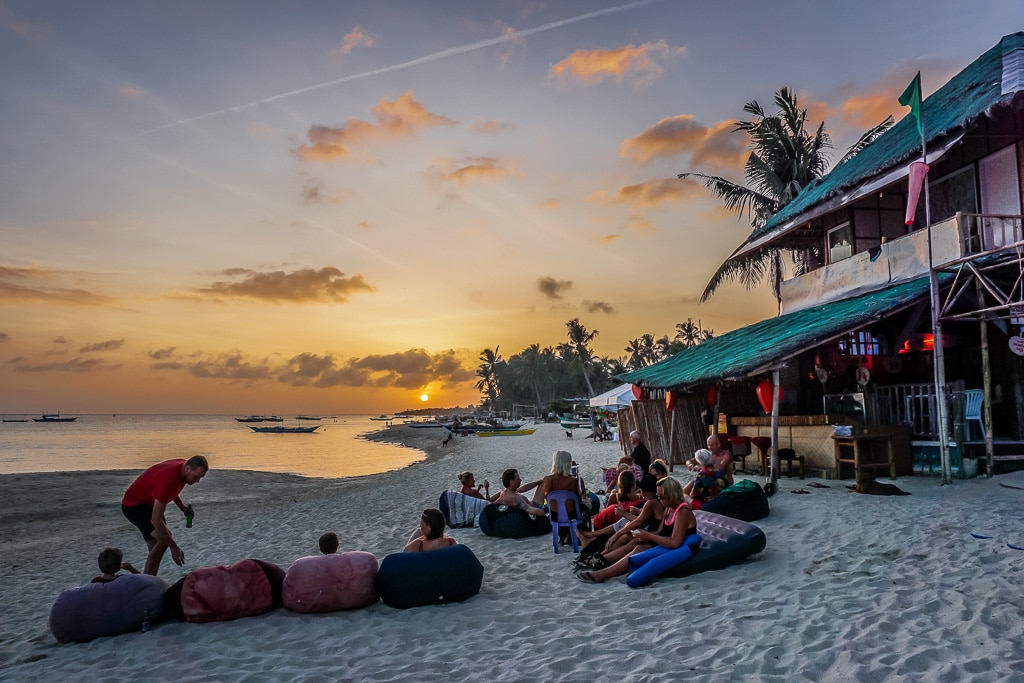 The only thing we didn’t like about Santa Fe is the noticeable expat population of old western men with young Filipino girlfriends. You see this everywhere in the Philippines, but it stood out in Santa Fe because of the lower number of western faces around. These groups of men could often be seen drinking beers all day with their girlfriends head’s down on their mobile phones. Fingers crossed that side to Santa Fe Bantayan Island doesn’t grow to the scale of other popular resorts. But don’t let this put you off your Bantayan Island itinerary. It didn’t spoil it for us.

Eating and Drinking In Santa Fe 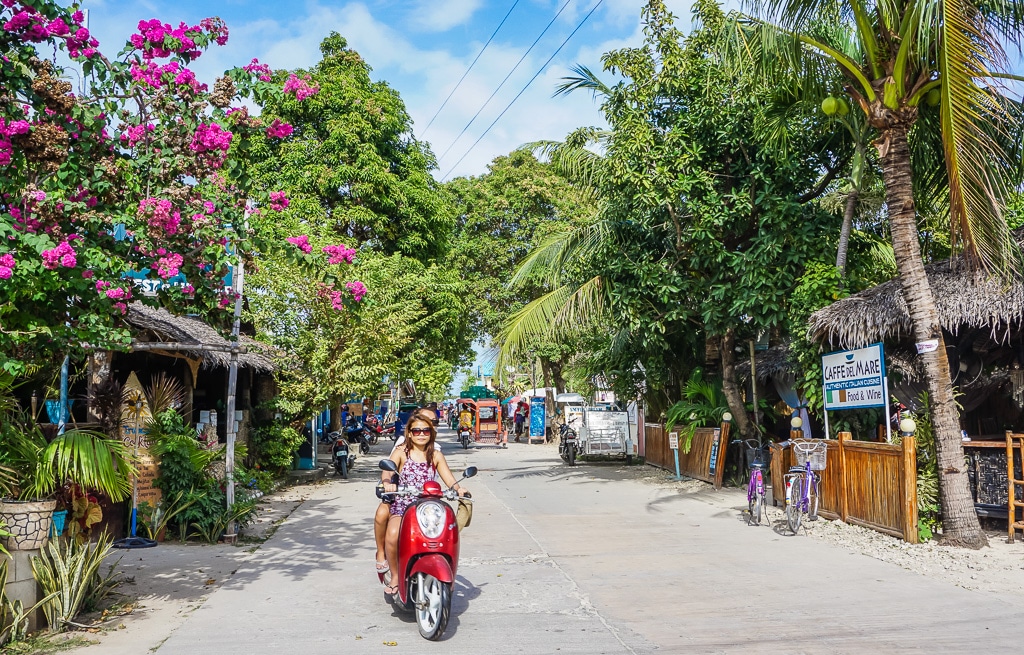 The main street in Santa Fe

There’s one small main street in Santa Fe that has a number of restaurants serving local and western food. Budget travellers can purchase 100 peso meals from almost all of them, while other dishes will set you back an average of 250 pesos. Half of the street’s restaurants are simple local run eateries serving just Filipino food, but the rest seem to be run by western expats. These places have put some extra effort/finances into interiors and menu options. All of these establishments offer no more than chilled acoustic singers as evening entertainment.

There’s also a small food plaza with a number of restaurants and bars lining both sides. The atmosphere in the plaza is slightly more up-key due to pop/dance music being played, but it’s still not a party destination. You’ll struggle to find anywhere open after midnight but that was fine by us. A Bantayan Island itinerary should be about taking it easy, not partying into the early morning. 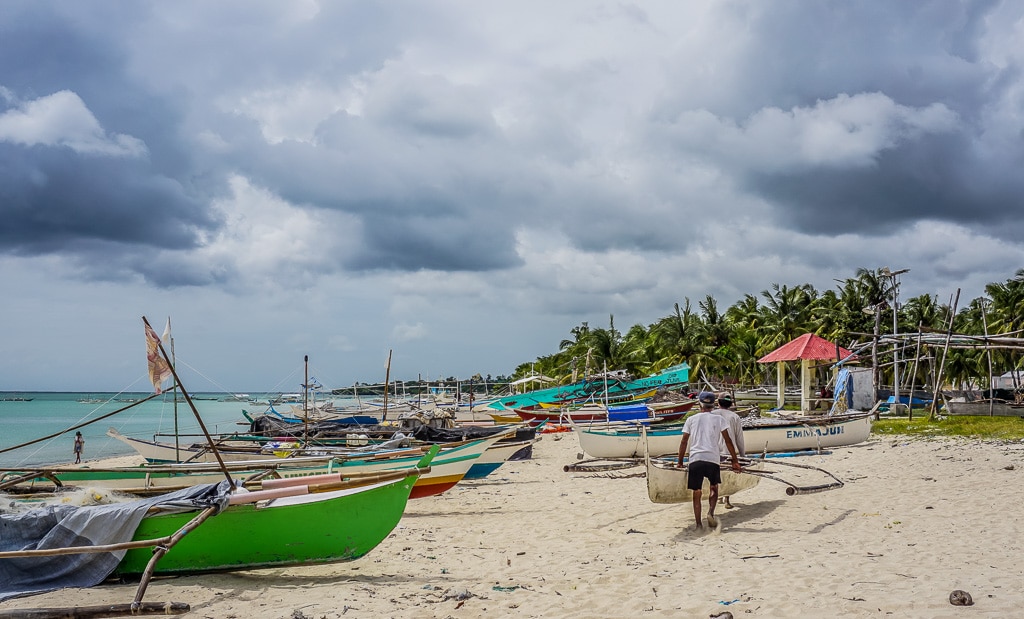 Our first impression of Santa Fe beach wasn’t “WOW!.” It didn’t blow us away because it was not the pristine white sands we were expecting. Santa Fe beach, which sweeps around the south-east corner of Bantayan Island, is impressive in size but isn’t as tidy or pretty as we’d hoped.

It’s still early days for Santa Fe, Bantayan Island, so the beach feels very local. The beach has a lot of washed up seaweed, battered fishing boats and a few derelict houses/resorts. It’s also cut in half by the ugly ferry pier. Bantayan Island has suffered from some strong typhoons, including super typhoon Yolanda, so we assumed these derelict beach properties were casualties from these storms. 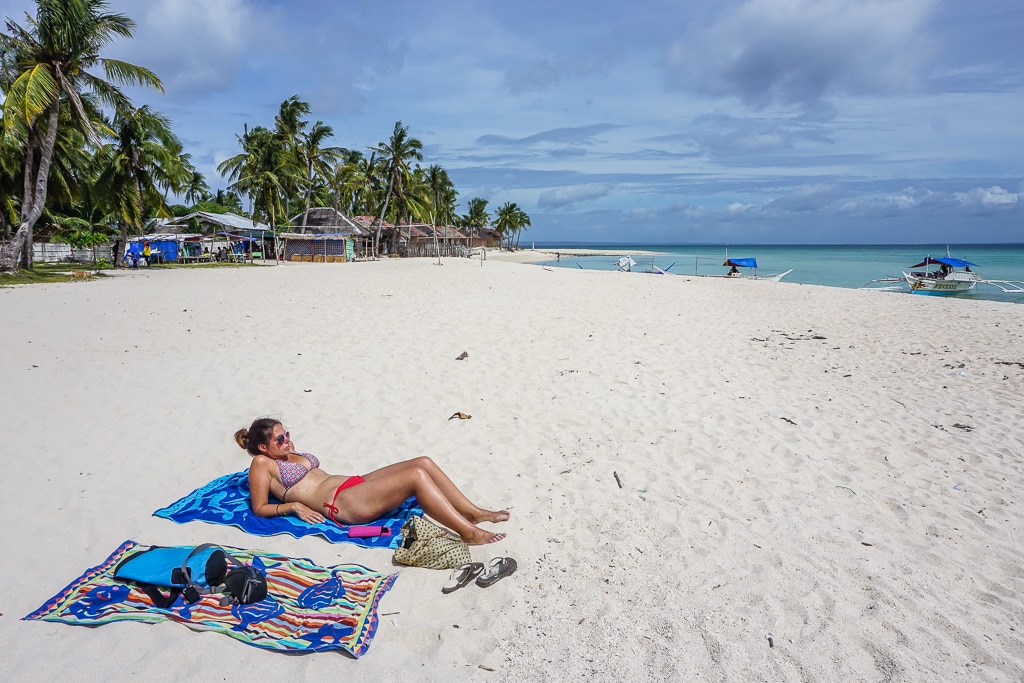 Once you accept Santa Fe beach for what it is, you start to see it’s unique charm and definitely see it’s potential. There’s a lot of local life which we always enjoy seeing. Fisherman attending tangled nets, kids playing in the sand and local beach weddings.

The best part of the beach for sunbathing and swimming is at the front of easy-going Yooneek Beach Resort. Here, the beach is spotless and each night a crowd gathers to watch the sunset while drinking a beer or two. Make sure to add that to your Bantayan Island itinerary.

Other Beaches In Bantayan Island 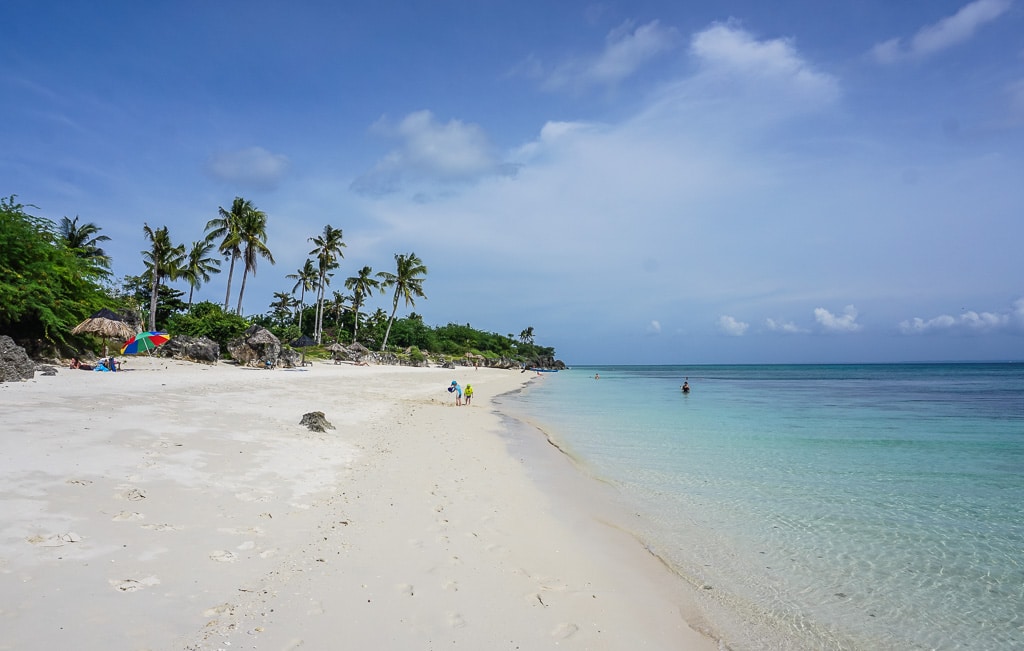 One thing you must not leave out of your Bantayan Island itinerary is Paradise Beach. Just a 10-minute tricycle or 20-minute bicycle ride from Santa Fe, Paradise Beach is a small but perfect white sand beach with some of the most powdery sands we’ve seen. For some reason, this beach is only visited by tourists, so most of the time is quiet. When we visited on a Friday lunchtime, there were just 20 other people to share the beach with.

It costs just 50 pesos per person to enter the beach, and there are a few umbrellas that can be used for shade at no extra charge. Take your own food as there’s only one simple shack selling beer, coke and crisps. You can also hire snorkels to explore the coral and fish close to the shore. However, the two we hired from the shack kept leaking so we recommend hiring from Santa Fe town.

Things To Do In Bantayan Island 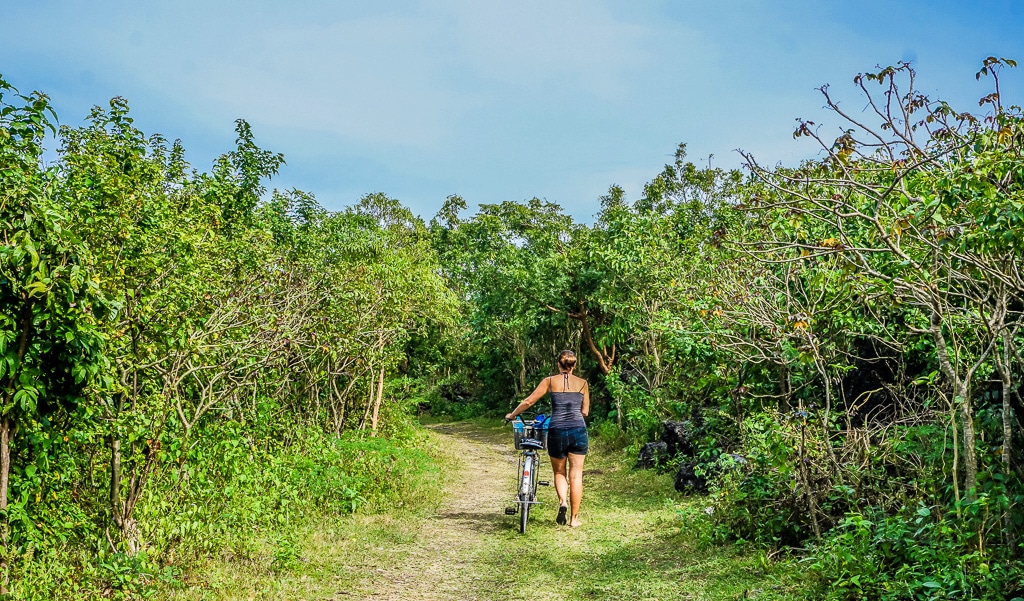 Cycling the countryside around Santa Fe

If you’re looking for other things to add to your Bantayan Island itinerary, here are a few ideas.

Island hopping – There are a number of tour companies offering boat trips to neighbouring smaller islands. The highlight is to Virgin Island with fantastic snorkelling.

Hire a bicycle  – Hiring a bicycle is a great way to get around Santa Fe and to Paradise Beach. On the way to Paradise beach, we passed small communities and lovely coastal views. 150 pesos for 24 hours.

Bantayan town – Local life with no tourists can be found in Bantayan Town. Explore the market, plaza and streets like a local. Bantayan town is also the only place on the island with an ATM. A shared tricycle to Bantayan town is 20 pesos per person. 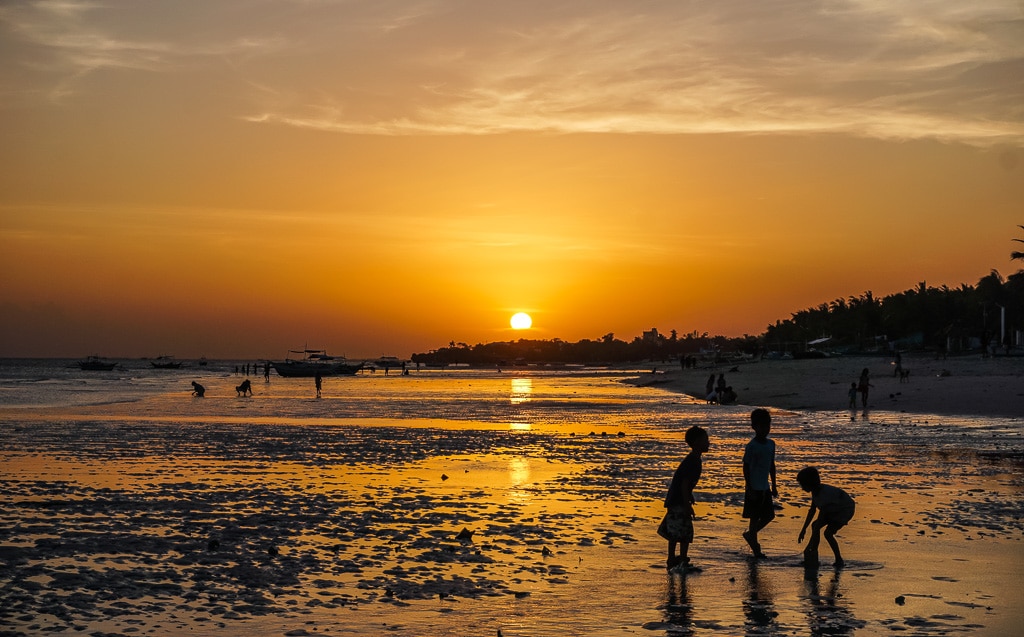 Despite Bantayan Island’s shabby first impression, we found it a wonderful place to stay. The easy-going vibe becomes hard to leave once you’ve stayed a few days. We extended our 5 day stay to 6 days due to enjoying Santa Fe’s relaxing atmosphere and our choice of accommodation so much. We felt immersed in this pleasant local town but with the comfort of low-key tourist amenities.

Santa Fe, Bantayan Island is one of those places that we can see will change greatly over the next few years. As other islands like Palawan and Bohol become busier and busier, travellers will look for other island alternatives. We’ve heard great things about Apo Island and Siquijor Island which we’ll be sure to visit on our return to the Philippines.

With the growing numbers of Bantayan visitors, the beach will get cleaned up and the derelict properties pulled down. When this happens, it’ll be even more beautiful than it is now. But we hope it maintains its local hammock-swinging vibe that makes this place so special.