There’s a little known and little visited coastal area on one of the Philippines’ most popular islands that you should know about. An area that’s for now, a remote and peaceful paradise. With neverending white sands, coconut filled palm trees, local fishing villages and almost no development. We’re almost tempted to keep it a secret, but as you’re so kind to visit our website, we’ll happily tell you. You’ll find the charming Philippine Eden at Long Beach San Vicente Palawan.

Too many travellers stick to the Palawan pancake trial by making a beeline for El Nido and then heading south to Puerto Princesa or north to up and coming Coron. The location of San Vicente is perfect to break up the six-hour bus journey between Peurto Princesa and El Nido, but still, most travellers miss it. We’ve got a strong feeling Long Beach Palawan won’t stay this way, so read on for more information on why you should head there now. 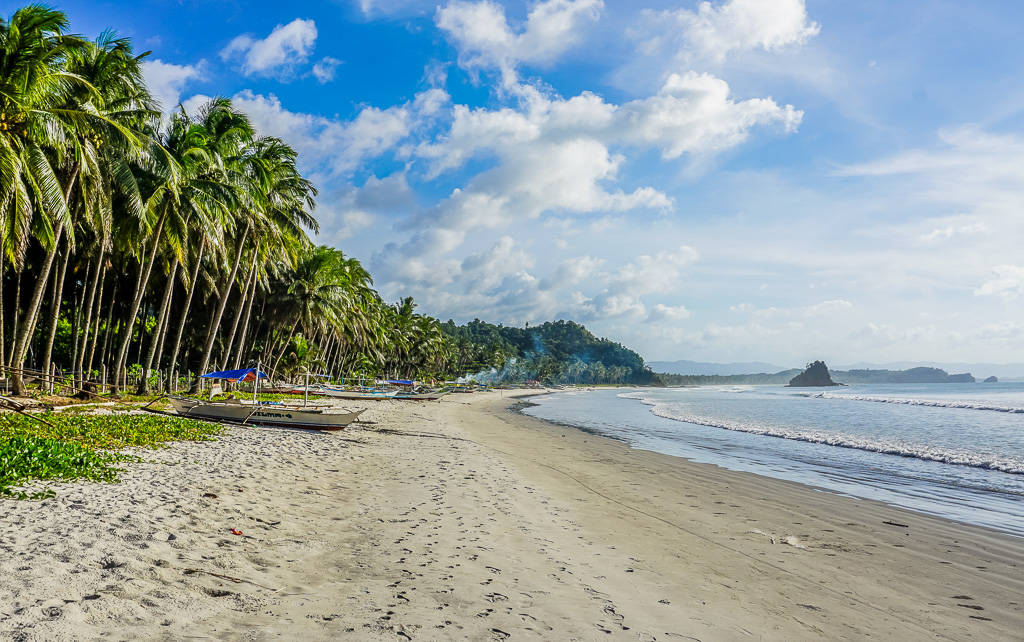 THE “LONGEST WHITE BEACH IN THE PHILIPPINES” 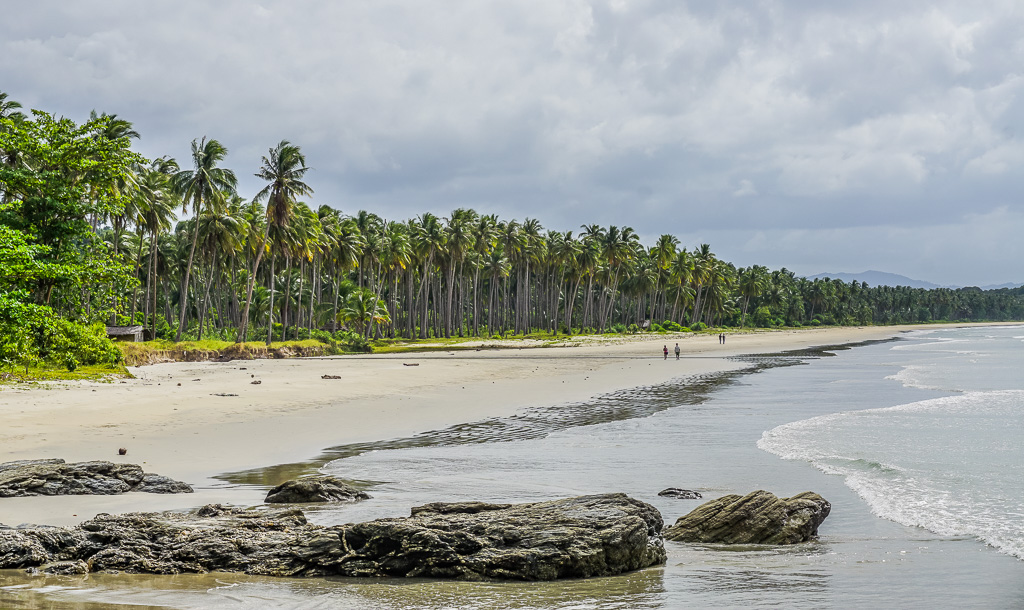 Long Beach Palawan is being touted as the “longest white beach in the Philippines” by officials. With 14km of undeveloped coastline, it’s three times longer than the Philippines’ most famous beach of Boracay. But the fact is, Long Beach is broken up in several places by rocky headlands, so actually, consists of six stretches of powdery sands. 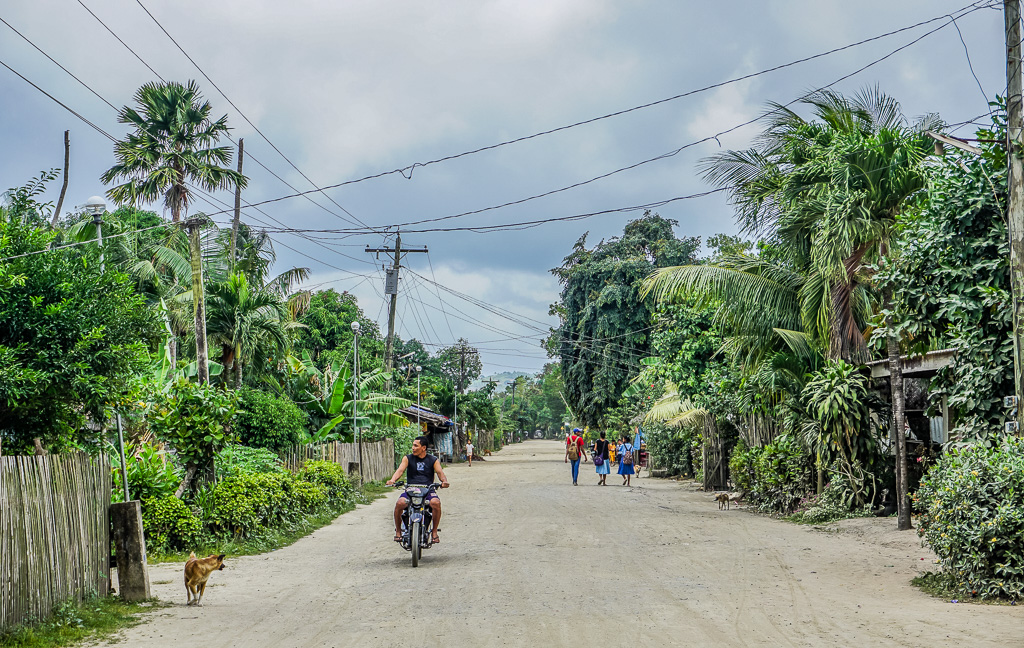 The truth is, there isn’t much at Long Beach Palawan, but that’s what makes this place so special. The area is alive with friendly local fishing villages. Kids playing on their way home from school, fishermen attending to their tangled nets and hundreds of colourful beached fishing boats.

There are no restaurants, no bars and no massage shops. These amenities are only available at your choice of accommodation. The sandy streets are sparsely populated with only little convenience stores selling bananas, instant coffee sachets and loaves of sliced bread.

IT WON’T STAY THIS WAY FOR MUCH LONGER 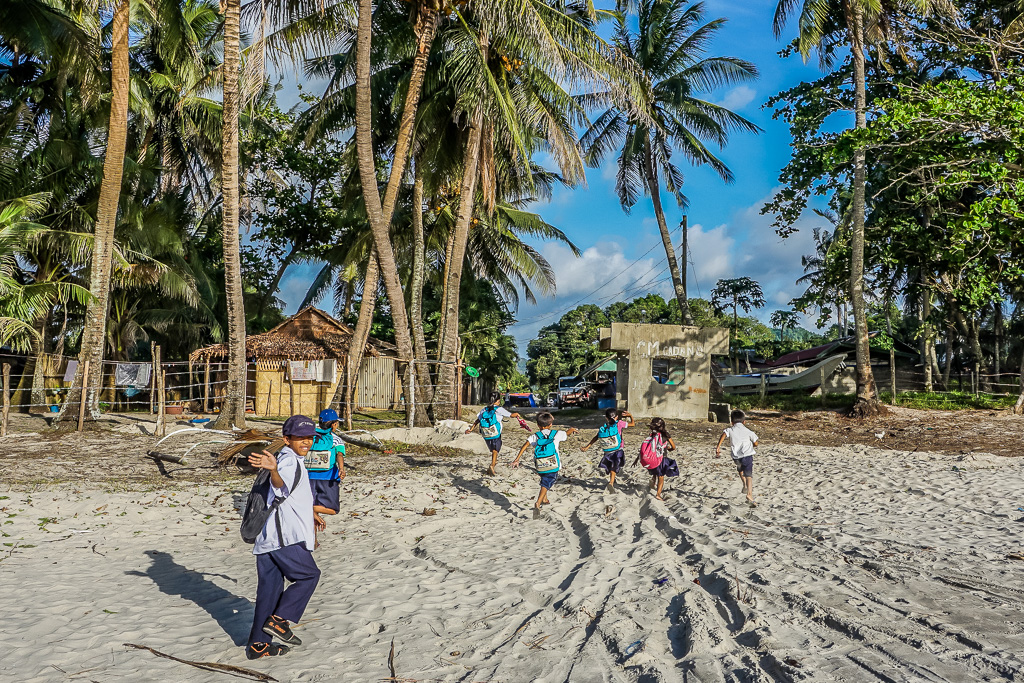 Like most good things, they usually come to an end, and that’s looking like the case at Long Beach San Vicente. We can guarantee that it’ll soon be populated with thousands of tourists like other Palawan destinations such as El Nido.

Right now, San Vicente international airport is being built, with plans to finish at the end of this year. Big resort developers have already purchased masses of beach-side land in preparation for the airport completion. As soon as the airport is complete, resorts will start to spring up all along Long Beach Palawan and their rooms will be full of Chinese tourists in their coach loads. Another beautiful coastline ruined by over development. 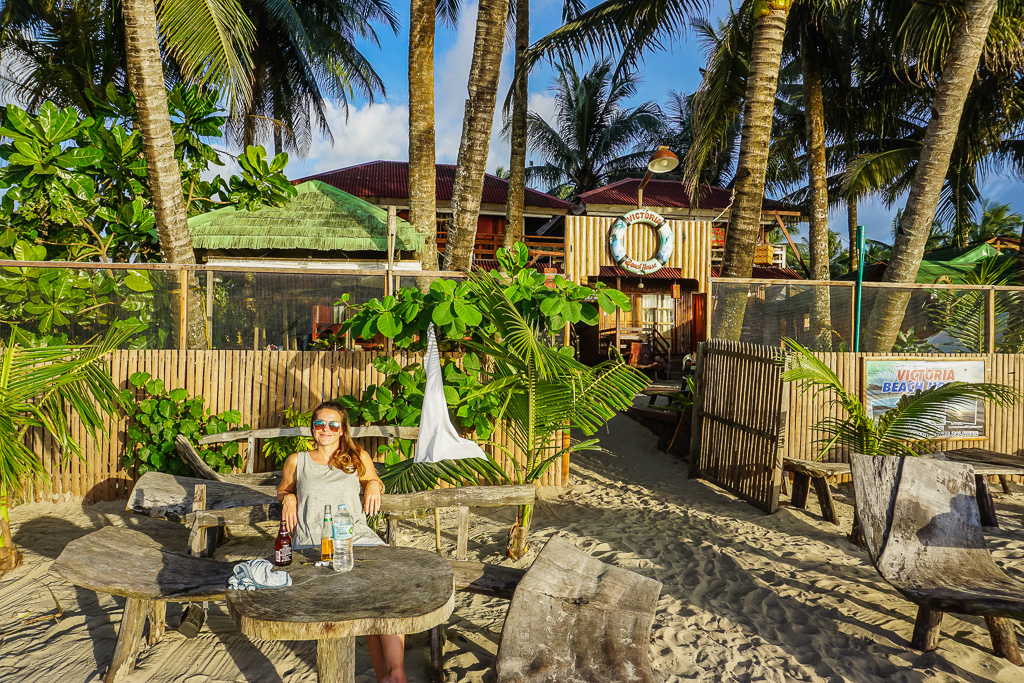 We found an absolute gem of a place to stay at Long Beach San Vicente. The most northern beach is Alimanguan and what a fantastic beach it is. Alimanguan Beach is around 2km in length and has just one tourist accommodation option, Victoria Beach House. The rest of the beach is simply palm trees, village property and dozens of fishing boats.

Victoria Beach House is situated right in the middle of Alimanguan Beach so is surrounded by local village life. It was such a joy to meet so many locals, especially the kids, as we wandered the shore each day. Even as we sunbathed we’d be approached by inquisitive children wanting to know our names and where we’re from. Us being there clearly wasn’t the norm for them yet which was nice to experience. 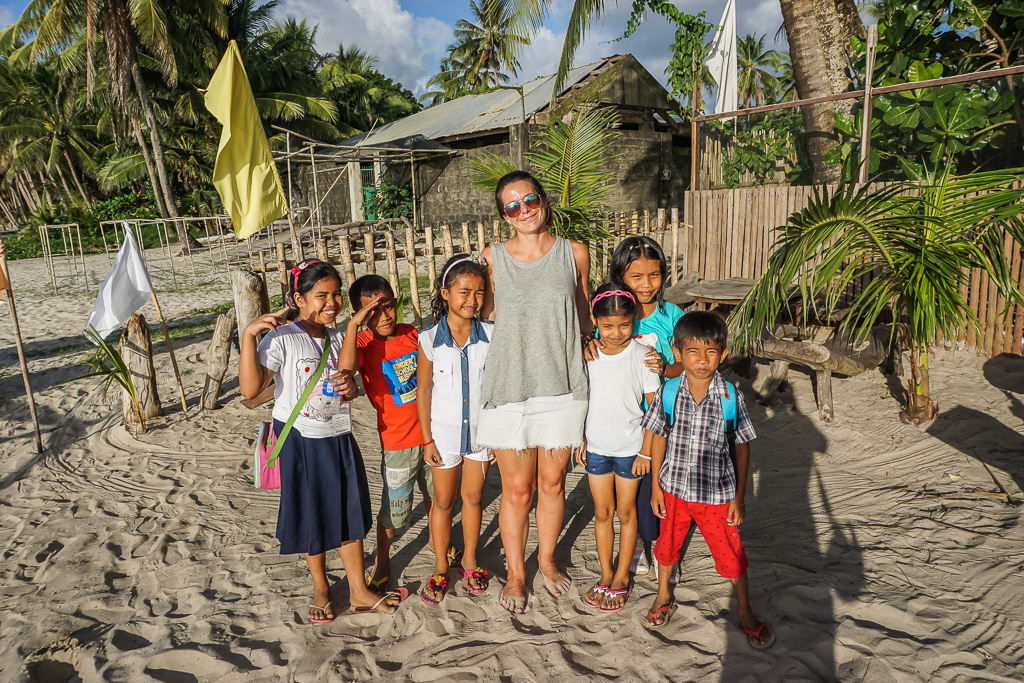 One day, in the rain, we took a longer walk to the next beach south of Alimanguan. It’s easily accessible with a bit of low headland rock to climb over. According to Google maps, the beach is called Tagpis Beach and is even less developed than Alimanguan. Well, we say less developed but what we really mean is there’s nothing there at all! It must be the most remote of all the beaches that make up Long Beach Palawan. 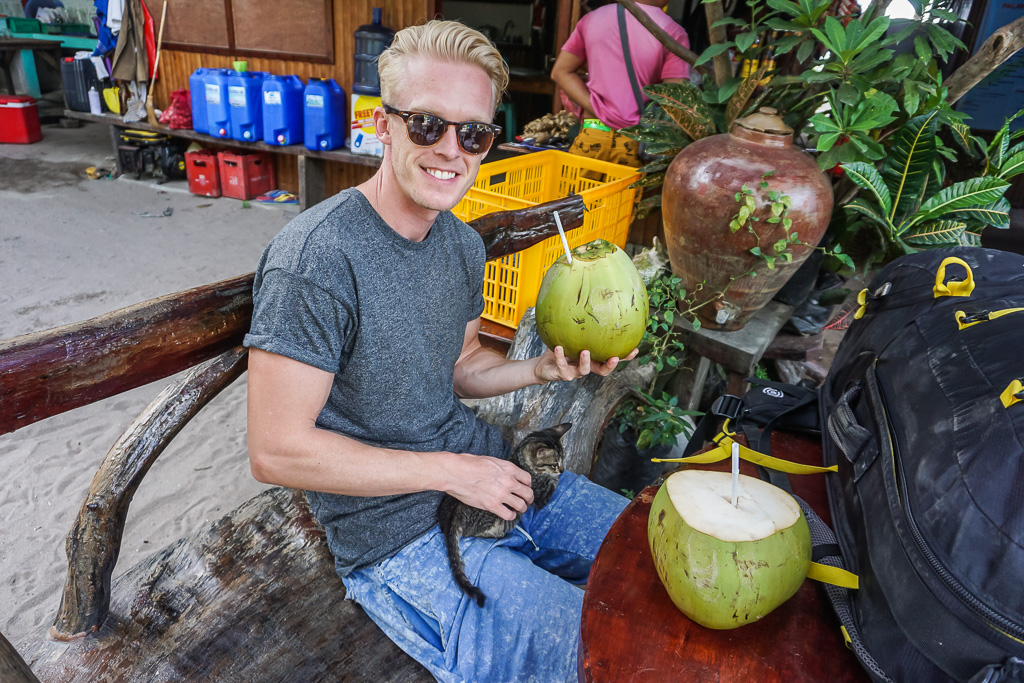 Checking in with a free coconut and kitten!

Tagpis Beach must be about 3km worth of gorgeous coastline and there is not a building in sight. On our stroll, we saw only two wandering locals and a buffalo pulling a cart with its owner on board. We were surprised to not even notice a local village here. Only palm trees, sand and sea.

HOW TO GET TO LONG BEACH SAN VICENTE PALAWAN 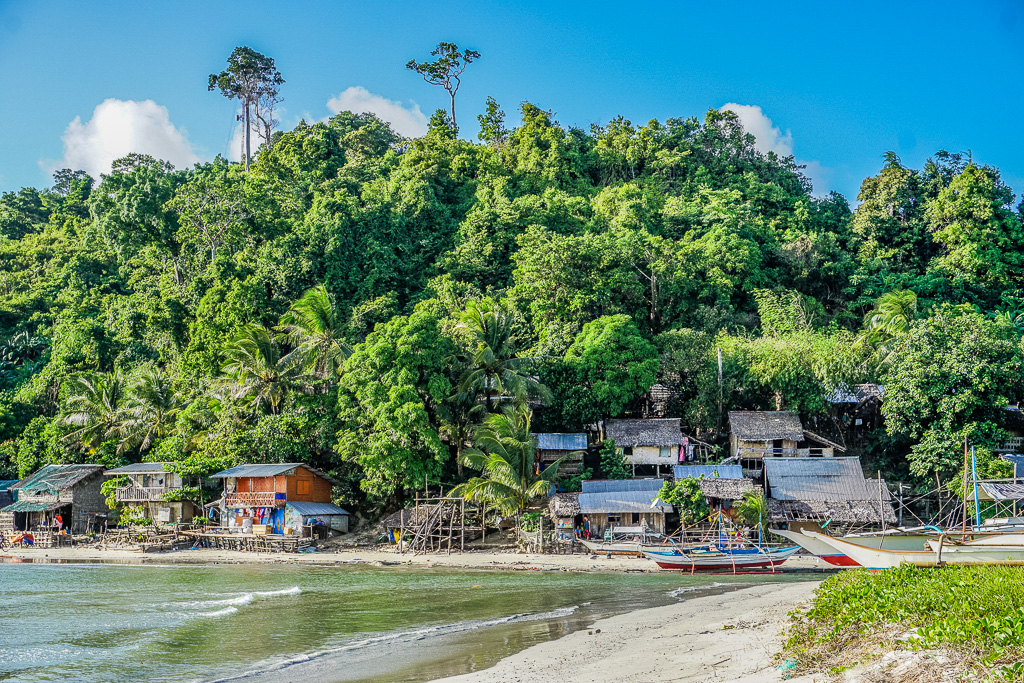 Fishing village at the end of Alimanguan beach

If you’re already on Palawan Island, getting to Long Beach San Vicente is easy.

Go into any of the tour companies in El Nido and tell them you want to go to San Vicente. For around 300 pesos, they’ll book you onto a shared van on route to Peurto Princesa. The driver will drop you off at one of the junctions close to San Vicente. From there it’ll be a jeepney, tricycle or motorcycle ride to your chosen Long Beach Palawan accommodation.

If you’re coming from Puerto Princesa, it’ll work the same way but it the opposite direction. Ask one of the local tour companies to drop you off at a junction for San Vicente and they’ll take care of the rest. The journey time will be approximately 4 hours.

IF STAYING AT VICTORIA BEACH HOUSE ON ALIMANGUAN BEACH 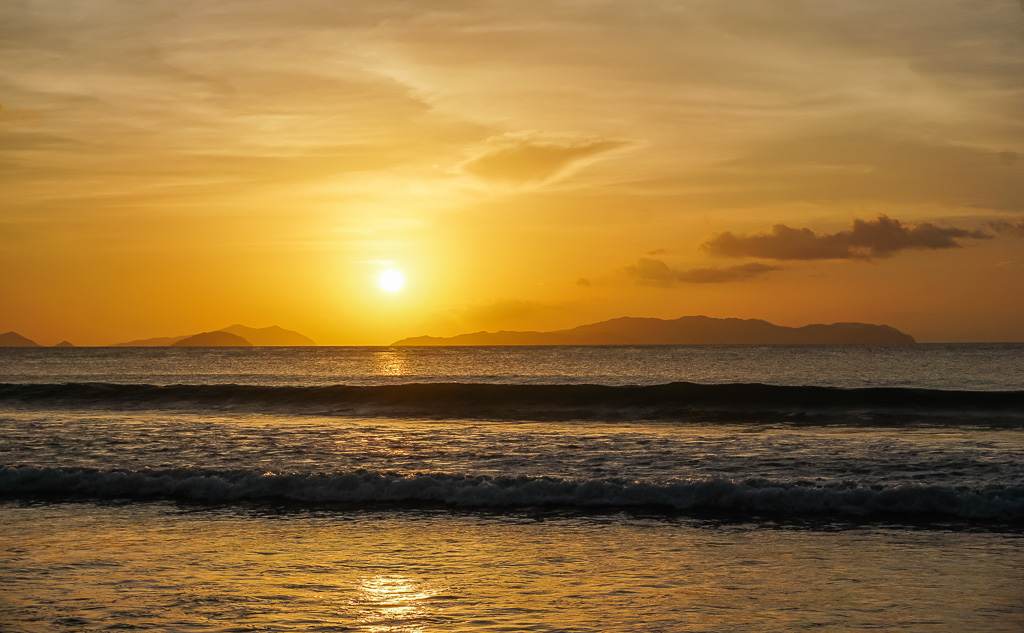 We’re writing this Long Beach San Vicente Palawan post as we stay at our last stop in the Philippines. Out of all the destinations we visited, our time spent on Alimanguan beach at Victoria Beach House has to be the highlight of our trip. We have a thing for remote, wild and local beaches. The idea of going to overcrowded and overpriced Boracay fills us with dread but Long Beach San Vicente Palawan is in complete contrast.

We urge you to go now before it’s too late. See the local charm and natural windswept shores of Long Beach Palawan ahead of that damn airport being complete and those ghastly huge resorts being constructed.