Hong Kong is a beautifully unique city which must be seen from its many different viewpoints. By day the city shines in the Asian sun with a dramatic backdrop of green soaring mountains. Trekking to the top of Lion Rock will give anyone the best daytime vantage point. By night the city lights up like a metropolis from the future with skyscrapers competing for your attention. For the best Hong Kong night view, take the bus to Victoria Peak at night. 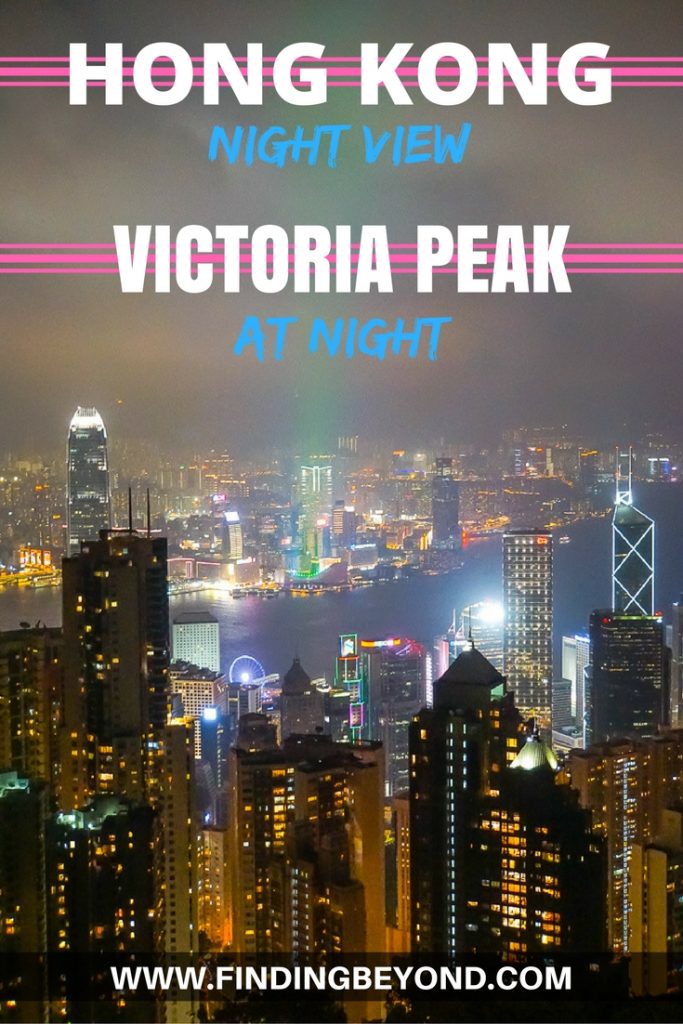 Victoria Peak, also known as Mount Austin and The Peak, is a 554m tall mountain in the western half of hong Kong island. Out of all the peaks in Hong Kong, Victoria Peak is the most visited by tourists visiting the city. There are a few reasons for this: 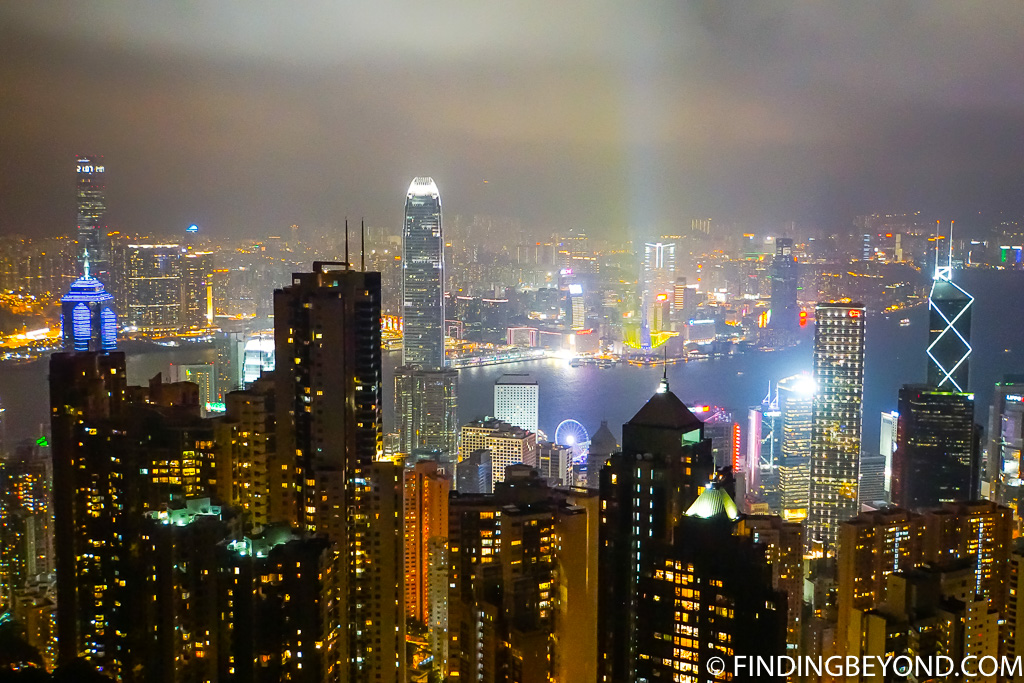 We’d already hiked both Lion Rock and Dragon’s Back over the previous two days. They each offered awesome daytime views of the soaring buildings, gorgeous mountains and shimmering blue waters. However, we were yet to see a birds eye Hong Kong night view so chose to take the bus to Victoria Peak at night to save our aching legs more hiking.

Ride the 15 Bus to Victoria Peak, Not the Tram

Too many tourists ride the tram to the top of Victoria Peak and we don’t know why. It’s over priced, over crowded and at peak times often have to Que for an hour or two to get on! There are also no views from the tram on the way up. Instead, take the bus to Victoria Peak!

The bus you need to take is number 15, which starts at Central Pier 5 and takes you all the way to The Peak. The 15 bus goes through central Hong Kong, then through Wan Chai before starting its ascent up Peak Road. Once on Peak Road, there are some cool views of the city on the way up, unlike the tram. 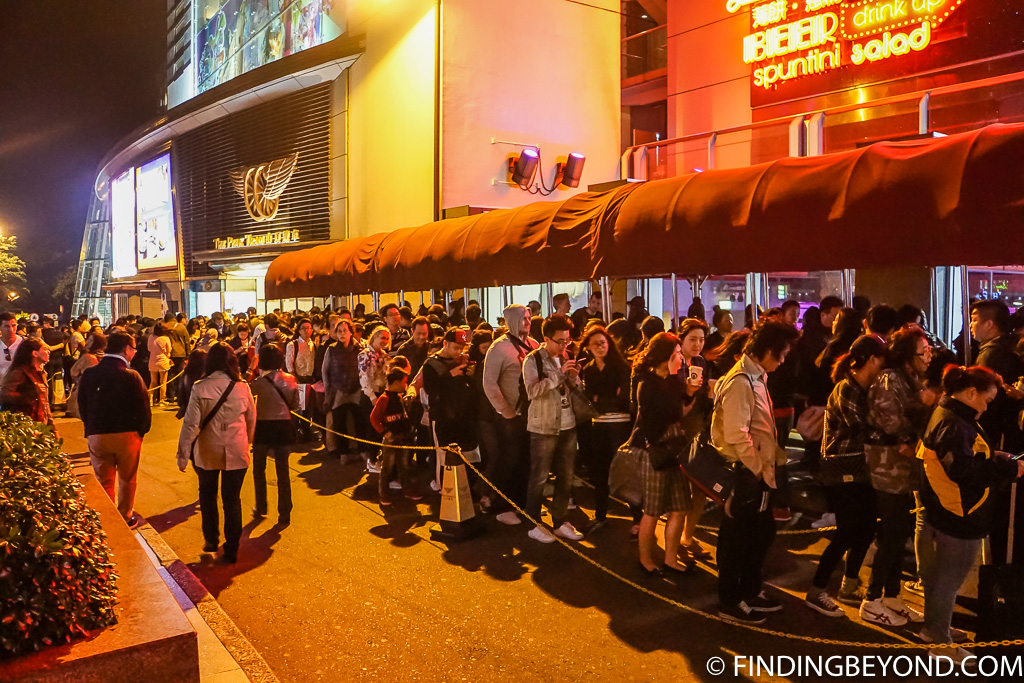 Depending which stop you board at, the price varies between $7.2HK and $9.8HK each way. That’s a steal when compared to the trams single journey cost of $32HK and $45HK return.

Here’s the full 15 bus to Victoria Peak stop list. They arrive every 10 minutes of so but if you want specific times then check here.

Bus to Victoria Peak at Night

We were staying in Wan Chai so paid the full $9.8HK and enjoyed the Hong Kong night view up Peak Road. The bus to Victoria Peak at night was extremely quiet. We boarded at 8 pm and there were just 10 other people on board. The journey from Wan Chai to The Peak took about 30 minutes.

The last stop on the 15 bus to Victoria Peak is called The Peak, which is underneath the shopping mall called Victoria Peak Galleria. We were surprised to see a shopping mall up there after previously visiting the wild peaks of Lion Rock and Dragon’s Back. The Peak is in complete contrast to those because you still feel very much in the city. 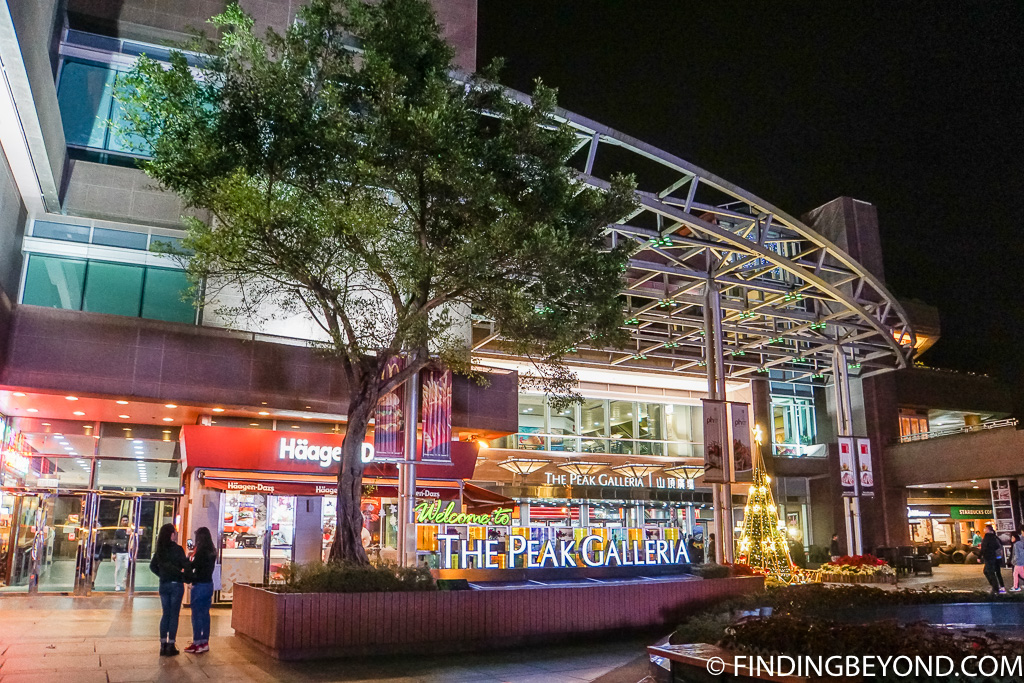 Head up to the shopping mall’s ground floor and walk all the way through until you reach the glass doors at the other end. Once through the doors walk towards the large upside-down looking building but don’t go inside. There is a viewpoint at the top of the building but you have to pay for it. Instead, walk to the right of the building, passing the tram stop and look for the signs for the viewpoint. You can’t miss it, just follow the crowds! 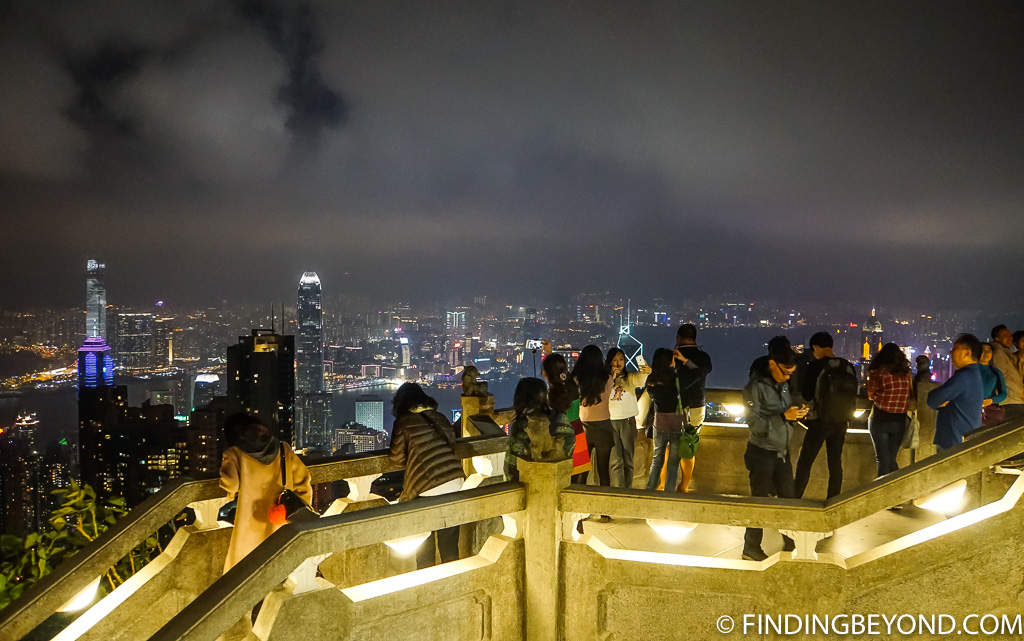 There you will find two FREE viewpoints which we hear are just as good as the viewpoint you pay for at the top of the shopping mall.

We’re so glad we went to Victoria Peak at night to see the Hong Kong night view. It’s a unique viewpoint of the city at any time of the day but at night is more spectacular.

You can see the entire central city area with all the tallest and most impressive skyscrapers in sight. Each building grabbing your attention with flashing lights, bright animations and even lasers! Beyond is Victoia Harbour reflecting the dazzling display and the skyline of Kowloon with its own towering architecture. 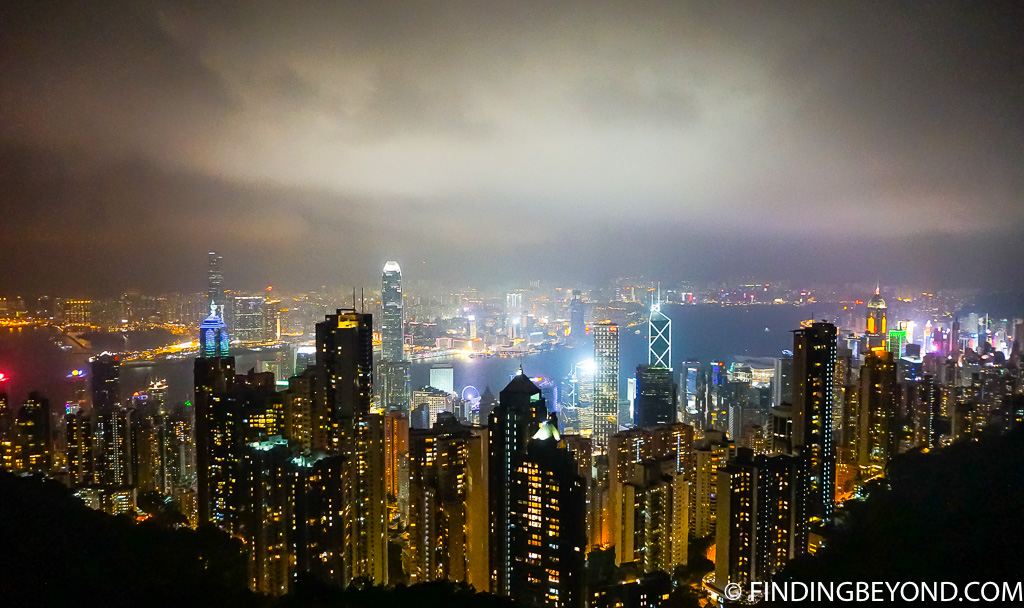 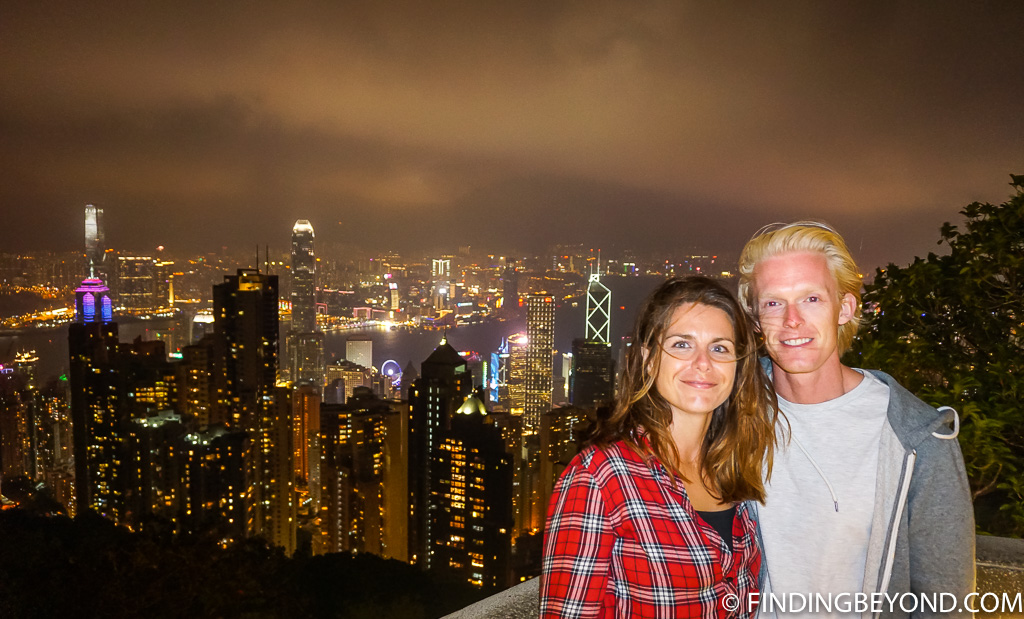 Us at Victoria Peak

We went to see the Hong Kong night view on a December Sunday evening and the crowds were not too bad. After 9pm the majority of tourists were getting in the long line for their return tram to the city which left the viewpoints almost empty. We can’t imagine we would have experienced the same during the day.

We almost missed out on going to The Peak. It was a spontaneous decision on our last night in Hong Kong after a conversation with someone we were staying with. After finding out there was a cheap and frequent bus to Victoria Peak we headed straight there so we could see the Hong Kong night view we were yet to experience.

Related reading: Check out our guide to the best things to do in all of Hong Kong! 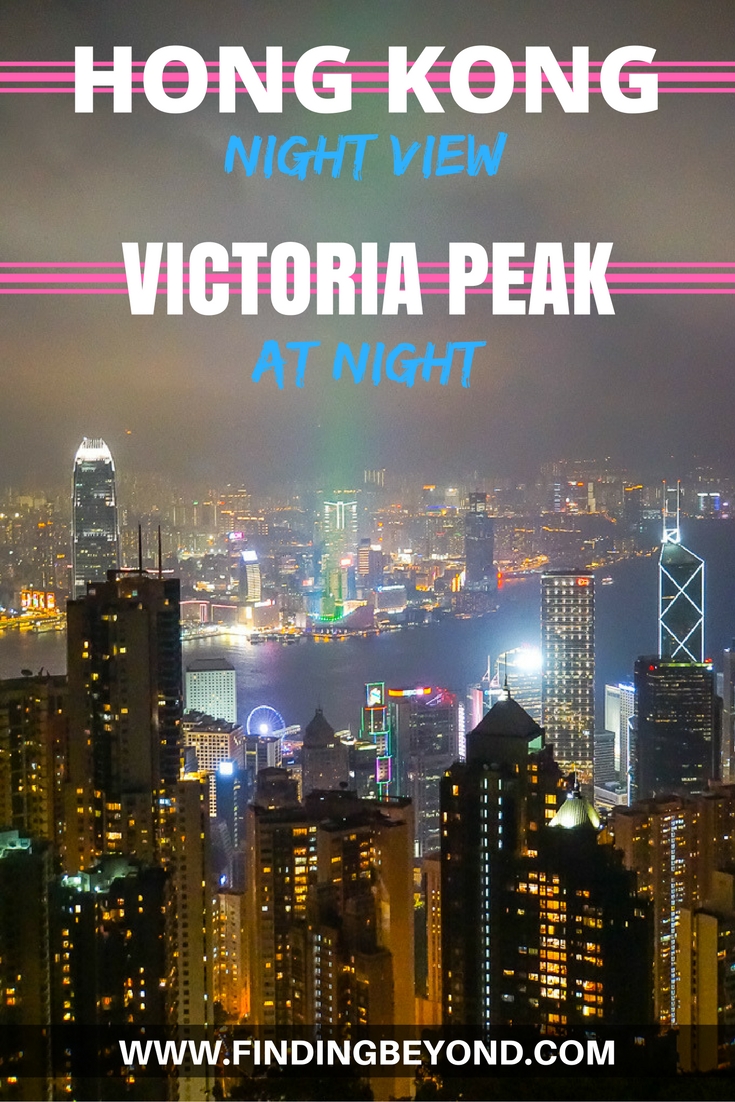