When you enter Sri Lanka into Google, the first image result and many others are of Sigiriya Rock. A huge boulder piece of the earth rising from Sigiriya’s jungle-clad landscape. It’s one of Sri Lanka’s wonders and a must-see on any visitor’s itinerary, whether you climb it or not. However, just two kilometres north of Sigiriya is another mountainous rock formation named Pidurangala. A second Sigiriya climbing opportunity that everyone should consider. 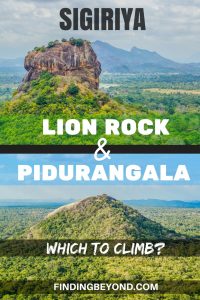 This puts some travellers in a difficult situation. There are two options to choose from but not everyone has the time to climb both. Especially if you are visiting as part of a day trip. Then there are budget travellers who don’t want to splurge on the expensive Sigiriya Rock ticket price but then have the fear of missing out. Could only climbing Pidurangala Rock be enough for them?

In this post, we hope to help those travellers having to make that decision on which rock to climb. We’ll be comparing Sigiriya Rock and Pidurangala so you can decide which is the best for you.

We climbed both by the way. That’s how we’re able to write this post 🙂 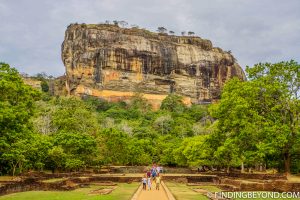 The 4500 rupees ticket cost allows you entrance to the museum, gardens, mirror wall and of course Lion Rock. We didn’t make it to the museum as chose to climb Lion Rock at sunset. Arriving towards the end of the day did not allow us enough time. We wanted to make sure we reached the top before the sun started to set. This is something for you to consider if you’re keen to see the museum. 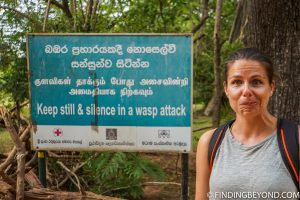 Since Lion Rock is a UNESCO World Heritage Site you get a big fancy ticket to take away with you. We know some travellers like to keep those sort of things as a souvenir.

As you can see, there is quite a difference in price between Lion Rock and Pidurangala Rock. This alone could be enough information to make your decision but we suggest to keep reading. The Pidurangala Rock entrance fee includes a visit to Pidurangala Royal Cave Temple at the foot of the path. It’s here where you simply hand over your 500 rupees to a man at the temple gate and he’ll allow you in. We’re afraid there are no fancy tickets.

Once you’re through the entrance you’ll enter the Sigiriya Rock garden. A beautifully landscaped garden which we read is South East Asia’s oldest! You’re free to wander around the remnants of an ancient city including moats and pools. Be careful if you have any food or drink with you as the garden is populated with many cheeky hungry monkeys. 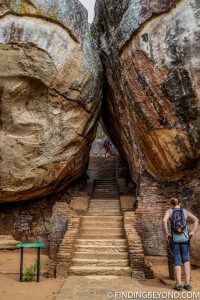 The start of our climb up Lion Rock 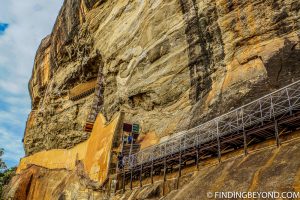 Staircase clinging to the side of Lion Rock

The climb to the top of Lion Rock consists of 1200 steps. We know this sounds like a lot but with regular breaks to take in the views, it really isn’t that hard. All ages climb the steps from the very young to the very old. If you’re worried about it then we recommend heading up in the early morning or late afternoon when temperatures are cooler.

Halfway up there’s the optional spiral staircase that takes you to some ancient and famous painted frescoes. Back in the day, there were many more but these are all that’s left so are well protected. They’re worth the extra effort to see. 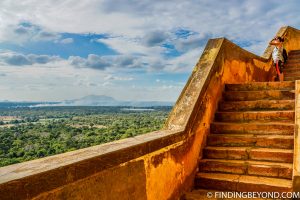 Taking in the views half way up 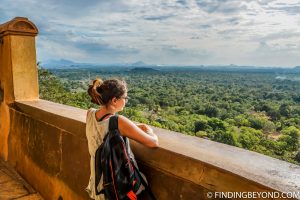 Enjoying more views on our way up Lion Rock

Shortly after the paintings, you reach the Mirror Wall. It was once was so highly polished that the King could see himself whilst he walked alongside it. Though now there are many verses scribbled on the wall from visitors dating back as far as the 8th century. It’s lost its mirror like shine and no longer are visitors allowed to write or even touch it.

At the bottom of the last set of stairs are huge Lion paw carvings. It’s here where you’ll realise why it’s named Lion Rock! You feel on the edge of the world while climbing those last stairs. If you suffer from Acrophobia then you’ll feel it here! 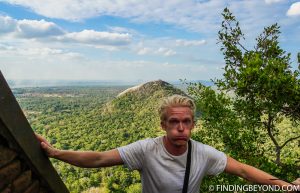 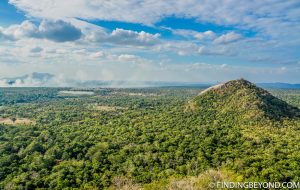 The downside with Lion Rock is the large numbers of tourists that gather here. They arrive in their coach loads so at times some patience is needed when stairs get crammed full of selfie taking Chinese visitors. You’ll find the busiest time of day to be in the early morning so avoid this time if that’s going to be an issue for you.

The very start of the climb starts with the previously mentioned Pidurangala Royal Cave Temple. Although despite the rather fancy name there’s not much to see here aside from a reclining Buddha and some faded cave paintings. Though it’s still worth a look since you’ll be passing right outside the doorway. 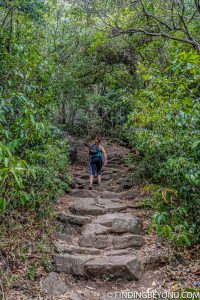 Starting the climb up Pidurangala Rock

The climb to the summit of Pidurangala Rock is shorter but overall more challenging. The first 20 or so minutes is a steady incline via steps and small rocks. The same minimal fitness levels needed for Lion Rock are needed here. However, be warned that the last 5 minutes require a small amount of rock climbing. Here the steps turn into large boulders which require both hands and feet to scale. Some strength and confidence is needed but is possible for anyone with a moderate fitness level. We would hate for anyone to be put off by rumours of anything more testing. 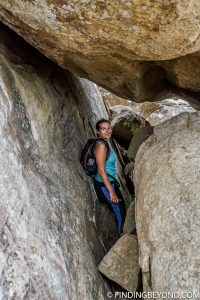 Things start to get a bit tricky

If you can challenge yourself with a bit of easy rock climbing then you’ll be rewarded with no crowds whatsoever. There are no large Chinese tour groups, just a handful of adventurous travellers taking on this less known path.

The views at the summit of Lion Rock are breathtaking. Wander through and scale the foundations of what was once an epic royal palace built in the 5th century. From here there are 360-degree views of the surrounding Sigiriya forested plain. An area populated with wildlife such as elephants, crocodiles and big cats. 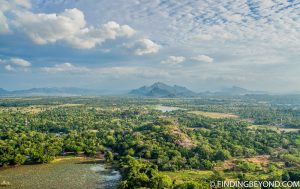 View from the top of Lion Rock 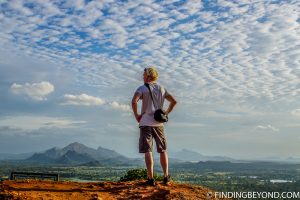 King of the world at the top of Lion Rock 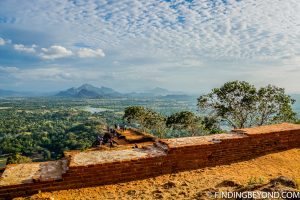 Royal Palace ruins with a view!

We waited at the 200-meter summit until the sun began to disappear. Then were rewarded with one of the best sunsets we have ever seen over this unique scenery. 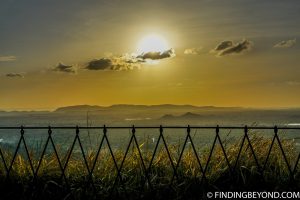 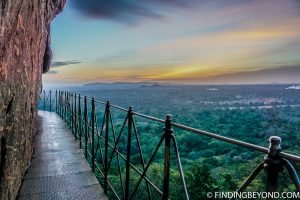 The changing colour sky at sunset

The views at the summit of Pidurangala Rock are equally as stunning as Lion Rock. Again you can view as far as the eye can see, providing the weather allows. There are no ruined palaces here but the stand out feature of the Pidurangala Rock viewpoints is the uninterrupted panorama of Lion Rock. It’s a unique perspective of the site that you cannot get from anywhere else. 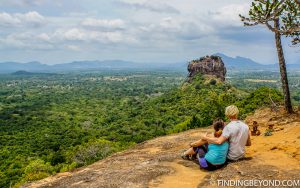 View of Lion Rock from the top of Pidurangala 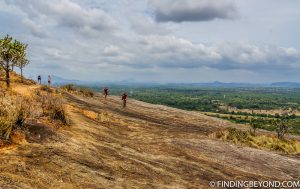 No crowds at the top of Pidurangala Rock 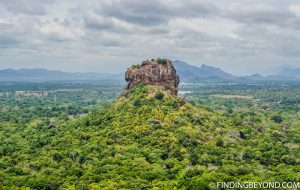 If you have the luxury of time and moderate fitness then make sure to do as we did; climb both. Both rocks offer unique experiences despite being so close together.

If cost is your main concern then your decision is probably easy. Pidurangala Rock is crazy cheap. However, do remember that you’re most likely visiting Sigiriya only once in your lifetime. Lion Rock is expensive for budget travellers but it’s a great experience despite all the tourists. There’s a reason why they charge visitors £25 each. 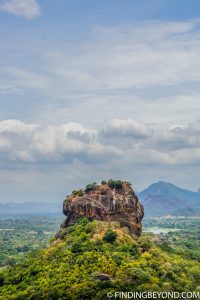 If you strongly want to avoid flocks of other tourists then Lion Rock probably isn’t for you. You’ll get frustrated with sometimes having to wait in line before progressing. Pidurangala Rock is the polar opposite if you want to get away from the crowds and enjoy the views on your own.

If money isn’t an issue but you only have time to climb one, then we’d have to say Lion Rock. Purely because it really is a wonder of the world and there’s nothing else like it on the planet. We still had a fantastic experience at Sigiriya Rock, even with the crowds. The crowds remind you that you’re somewhere special. Somewhere where everyone wants to see so you should too.

10 thoughts on "Sigiriya Rock: To Climb Lion Rock and/or Pidurangala"