One of the main reasons for visiting the beautiful country of Sri Lanka was to see the Sri Lankan elephant in the wild. We’d be pretty stupid to travel all that way and not catch a glimpse of the big eared tubby giants. Well luckily for us, Sri Lanka has 22 national parks, many of them offering a high chance to spot elephants. When arriving in Sri Lanka, we planned to visit Minneriya National Park (info) but then we were told about little known Kaudulla National Park (info). 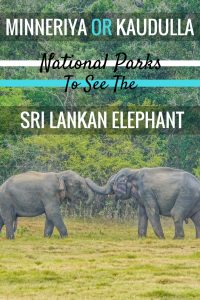 Which Park is Better for Spotting the Sri Lankan Elephant?

In fact, our very original plan was to visit Yala National Park. Situated in the south-east, Yala is probably the country’s most popular. It’s not too far from the developed south coast beaches which make it pretty accessible for tourists. Yala also has great Sri Lankan elephant spotting potential and the countries highest concentration of leopards! Although, even with the highest concentration it’s apparently still hard to see the spotted cats.

Our plans changed on our London to Colombo Sri Lankan Airlines flight.

The title of the article read “The Elephant Gathering“, accompanied by an amazing photo of dozens of Sri Lankan elephants. We excitedly read that in August and September a huge number of elephants gather at Minneriya National Park. This time of year is the area’s dry season so the elephants regularly gather around the Minneriya tank. If you’re lucky you can spot up to 200 at one time! We were visiting Sri Lanka from mid-August to mid-September so were very happy to read the article. Especially Shelley! 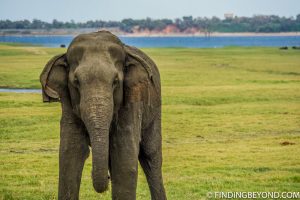 Minneriya National Park is 180KM Northeast from Colombo and conveniently located within the Cultural Triangle.

The Cultural Triangle is an area popular with most tourists due to its many cultural sights of interest. These include the Polonnaruwa ruins, Sigiriya and Kandy city. Minneriya is famed for The Gathering but you can easily see the Sri Lankan elephant at any time of year. Usually in high numbers.

The recent popularity of Minneriya National Park and it’s large Sri Lankan elephant gathering has increased tourist numbers dramatically. Yes, you can see many elephants but with that comes too many herds of tourist filled jeeps! 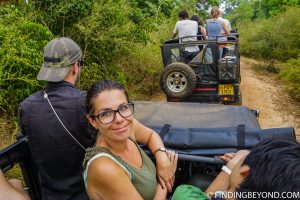 That’s why we were told about Kaudulla National Park

We were speaking to our guesthouse owner about arranging a Minneriya safari for us. The owner was a very friendly and kind man who genuinely wanted us to be happy while staying at his guesthouse. He has lived in the area all his life so knew both Minneriya and Kaudulla national park very well. He strongly recommended that we visit Kaudulla National Park instead of Minneriya. 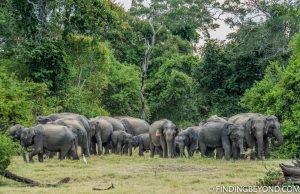 There is just as much of a chance to spot the large Sri Lankan elephant numbers as there is in neighbouring Mineeriya. Kaudulla also has its own dry season Gathering at the Kaudulla Reservoir, as they make their pilgrimage to Minneriya.

“Too many jeeps at Minneriya” our guesthouse owner kept telling us, “Kaudulla is better for you“. We had been told this about Minneriya by a handful of other tourists. They had all enjoyed seeing the elephants but the large number of tourists and jeeps made it feel like a theme park. That’s the last thing we wanted from our much awaited Sri Lankan elephant safari. However, nobody had mentioned about Kaudulla National Park. We trusted our accommodation owner and were intrigued by this national park that we had never heard of.

We spotted at least 70 elephants over the two hours driving around the park. Large lone male elephants, families with tiny infants and groups of 20 or so. It was mesmerising to see so many in just a few hours. They were active too. Playing, eating and even a couple of fighting males. 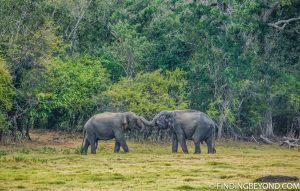 A big Kaudulla pleaser is the minimal jeep numbers. Including our own, there were just 5 jeeps in total. There was so much space, that at times we would have our own patch of the park. Something that would simply not be possible at Minneriya.

It’s not just elephants we spotted either. There were herds of wild buffalo, monkeys, peacocks and heaps of birdlife around the reservoir. We didn’t see the famous Gathering that we’d read about but then neither did our many fellow travellers who visited Minneriya at that same time. Our safari guide told us that we were a couple of weeks too early for that.

Where to Stay for both Minneriya and Kaudulla National Park

You can base yourself pretty much anywhere within the Cultural Triangle. If using private guides or taxis then it’s just a few hours or less between the many sights. However if like us, you are getting around via public transport, then we recommend staying closer to Minneriya and Kaudulla National Parks. 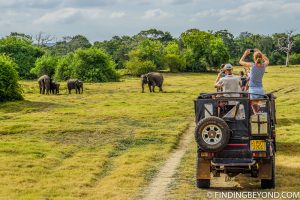 The closest option would be Habarana (10KM from Minneriya and 20KM from Kaudulla). Other options could be Sigiriya or Polonnaruwa. From any of these towns, a jeep safari with accommodation pick up can be arranged. We stayed in Polonnaruwa at the Nature Park Guest House. It offers basic accommodation but sandwiched between a small patch of jungle and a lovely canal/lake. The nearby jungle and water provide lots of birdlife and other wildlife like mongoose, monitor lizards and deer. And of course, it’s owned by the kind man and his family who thankfully recommended Kaudulla National Park.

For awesome accommodation options in all the mentioned locations click these links – Habarana, Sigiriya and Polonnaruwa. 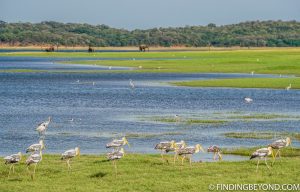 We can’t tell you first hand what it’s like to visit Minneriya National Park. However, we can tell you what many people warned us about its overcrowding. This would have spoilt the adventure for us so if you feel the same then do consider Kaudulla National Park. It’s a wonderful Sri Lankan elephant world which at the moment is not visited by large tourist numbers. Visit before everyone finds out about it!

9 thoughts on "Minneriya or Kaudulla National Park to see the Sri Lankan Elephant?"