From our visits to many countries around the world, the days spent exploring ancient city sites are some of our fondest memories. Historical ruins such as Cambodia’s Angkor Wat and India’s Hampi are a couple of spectacular highlights. So we were really pleased to find out that Sri Lanka had two ancient city sites to choose from. We wouldn’t have time to see both so we, unfortunately, had to choose one. I know, poor us! Would we visit the Polonnaruwa ruins or those at Anuradhapura? 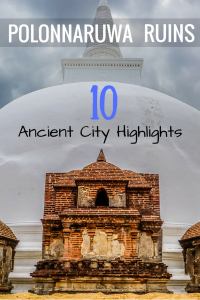 It was two friendly German girls who aided our decision to go to the Polonnaruwa ruins. While walking in beautiful Ella, the two girls told us that visiting Polonnaruwa ruins was one of their favourite experiences in Sri Lanka. They hired bicycles and enjoyed cycling from ruin to ruin in the easy to navigate compact ancient city. This sounded great to us so we started to plan the rest of our trip with a visit to Polonnaruwa ruins in mind.

This decision actually made planning the rest of the route through Sri Lanka easier. The Polonnaruwa ruins are situated within the country’s cultural triangle which we were already planning on visiting. The Cultural Triangle has some other sites of interest for us including Sigiriya and the Dambulla Cave Temples. Anuradhapura was further north so we would have had to take quite a detour to get there.

A bit of Polonnaruwa Ruins History

Around 800 years ago the ancient city of Polonnaruwa was the commercial and religious centre of Sri Lanka. It thrived for three centuries as the royal capital of both the Sinhalese and Chola kingdoms. The Cholas came first in the late 10th century when the South Indian Chola dynasty conquered Sri Lanka.

Before then, Anuradhapura was The Cholas’ capital but they chose to relocate to Polonnaruwa for two reasons. Not only because it had fewer mosquitos but they’d also be better protected from attacks by the Ruhunu Sinhalese kingdom in the south-east.

Worshippers inside the ruins

But in 1070, the Sinhalese kingdom and their King (King Vijayabahu I) did attack. They overtook the Chola dynasty and kept Polonnaruwa as their capital. It was during this time of Sinhalese rule that the ancient city of Polonnaruwa reached its highest glory.

Two Sinhalese Kings followed. The second king (King Parakramabahu I, 1153-86) successfully expanded the ancient city. Beautiful parks, a huge lake and many large buildings were constructed. The third king (King Nisanka Malla, 1187 – 96) didn’t do so well and ended up bankrupting the kingdom in his attempts. Oh no!

It was in the early 13th century when Polonnaruwa’s glory started to decline until it was sadly abandoned. The capital then moved to where Colombo is today and the ancient city of Polonnaruwa was left to become the Polonnaruwa ruins.

10 Must See Highlights at the Ancient City

Today the Polonnaruwa ruins mostly consists of a lot of interesting temples and religious buildings. However, there are some other non-religious constructions of interest. We recommend hiring a bicycle from your chosen guesthouse to give you the freedom to visit the sites in your own time. Our lakeside Nature Park Guest House accommodation had plenty of bikes for us to hire for the day. 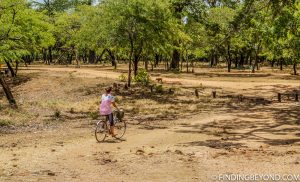 The distance between each ruin is not too great and the ground is thankfully flat. This makes for a very pleasant cycle and not too challenging in the heat! If cycling isn’t for you then there are plenty of guides willing to drive you around in a tuk-tuk or air conditioned taxi. 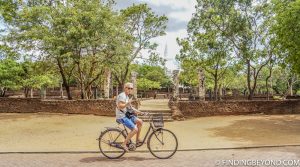 Me attempting to look cool on my bicycle

The cost of a ticket to the Polonnaruwa ruins 3550 rupees ($25 – Non-Sri Lankan Adult) each. Make sure to pick up a free map with your ticket. After purchasing your ticket you can visit the Polonnaruwa museum to load up on information before exploring the ruins themselves. The entrance to the museum is right next to the ticket counter which makes it easy. 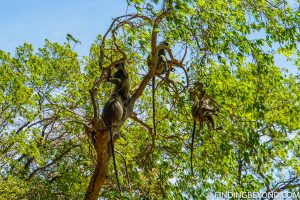 Some of the many monkeys within the site

The main entrance to the Polonnaruwa ruins is surprisingly not at the ticket counter. You need to head back onto the main road and head east for a few hundred meters to find the main gate. You can’t miss it. Just be careful of traffic if cycling.

So let’s get on to the 10 must-see highlights at the ancient city! Oh before we do, we hope you like monkeys. They’re everywhere in Polonnaruwa!

So you’re through the main gate and excited to see the Polonnaruwa ruins! The first site you’ll come across is the Royal Palace group. The most noticeable structure is the impressive Royal Palace constructed by King Parakramabahu. Today it looks like your Grandparent’s cavity ridden teeth but back in the day, it’s said to have been seven stories high! 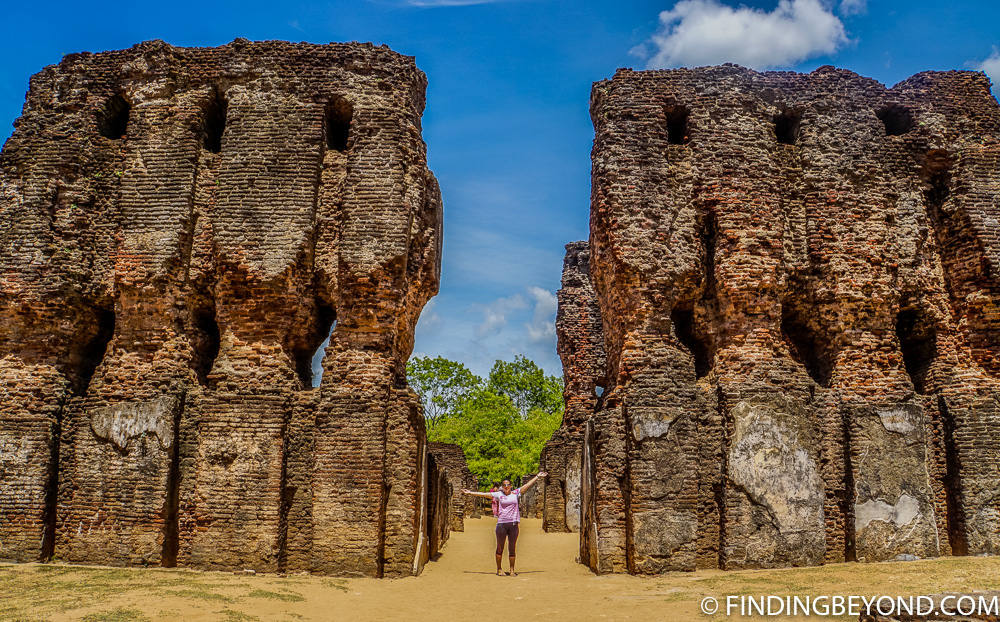 Shelley being dwarfed by the Royal Palace

Next up is the well preserved King’s Audience Hall. There are some great details to see here including the carved elephant frieze wrapped around its base and the fine looking lions at the top of the steps. 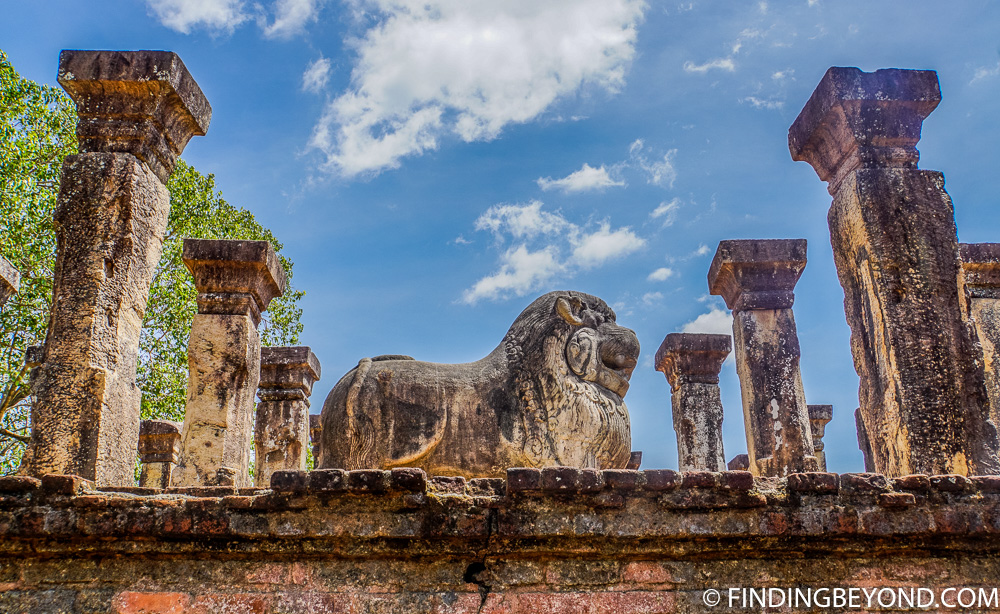 The majestic lion statue inside the Audience Hall

This is the oldest building at the Polonnaruwa ruins which dates back to the short-lived Cholas period. They were the ones who didn’t like mosquitoes. It’s also one of the few Hindu temples in the ancient city. You may notice it’s looking pretty good for its age. This is due to being made from hard wearing stone. 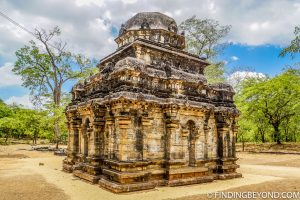 A very popular site is the Sacred Quadrangle. A collection of excellent and diverse ruins raised above ground level. The quadrangle is, in fact, the most compact group of Polonnaruwa ruins in the ancient city. A must see! 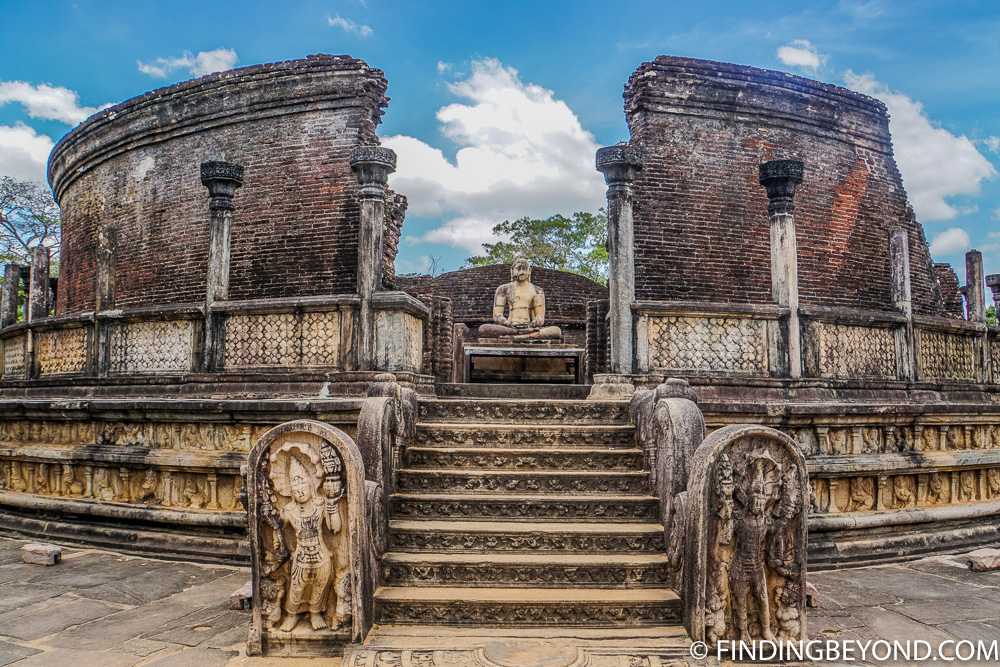 One of the Vatadage’s entrances

Our favourite from this group was the Vatadage, an impressive circular relic house. At 18 meters in diameter, it houses four Buddha statues with Polonnaruwa’s finest moonstone at its entrance. 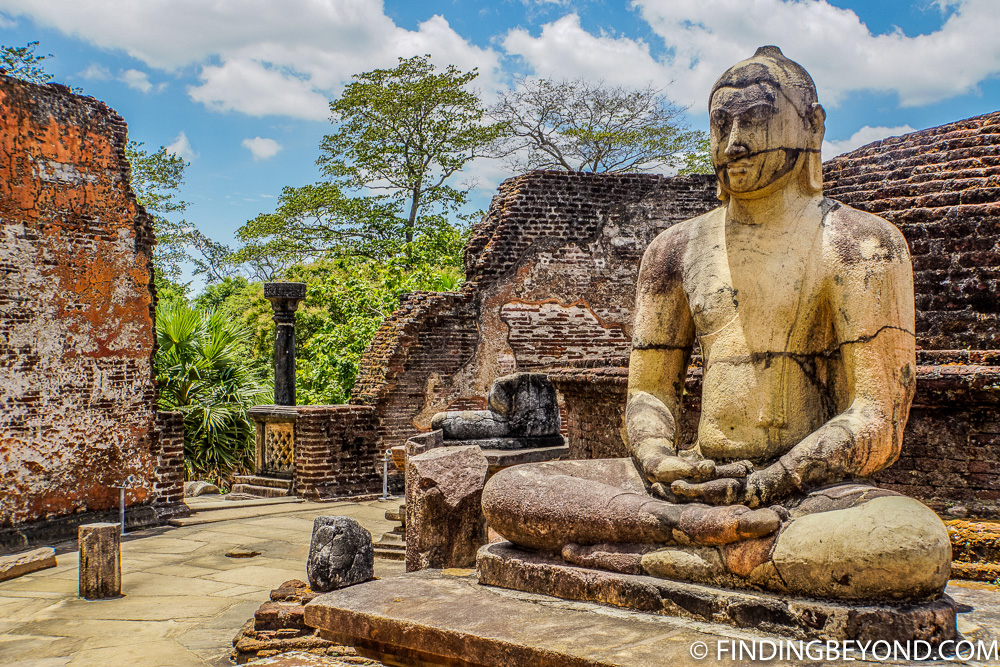 One of the four Buddha statues inside the Vatadage

We visited Polonnaruwa ruins on a scorching day so when taking our flip flops off to go inside we had to hop around like a couple of hyperactive frogs so not to burn our feet on the floor. With no roof, the sun quickly heats up dark surfaces!

This stupa made from brick is the third-largest dagoba in Polonnaruwa. Another epic structure from King Parakramabahu’s era. This is one of the quieter sites at the ancient city so will most likely have the place to yourself as we did.

Check out this huge dagoba! At 54m high, it’s the largest in Polonnaruwa and the fourth largest in Sri Lanka! It dates back to King Nissanka Malla (1187 – 1196) and apparently imitates the style found in the other ancient city of Anuradhapura. It took us many hops and jumps to get around this one! 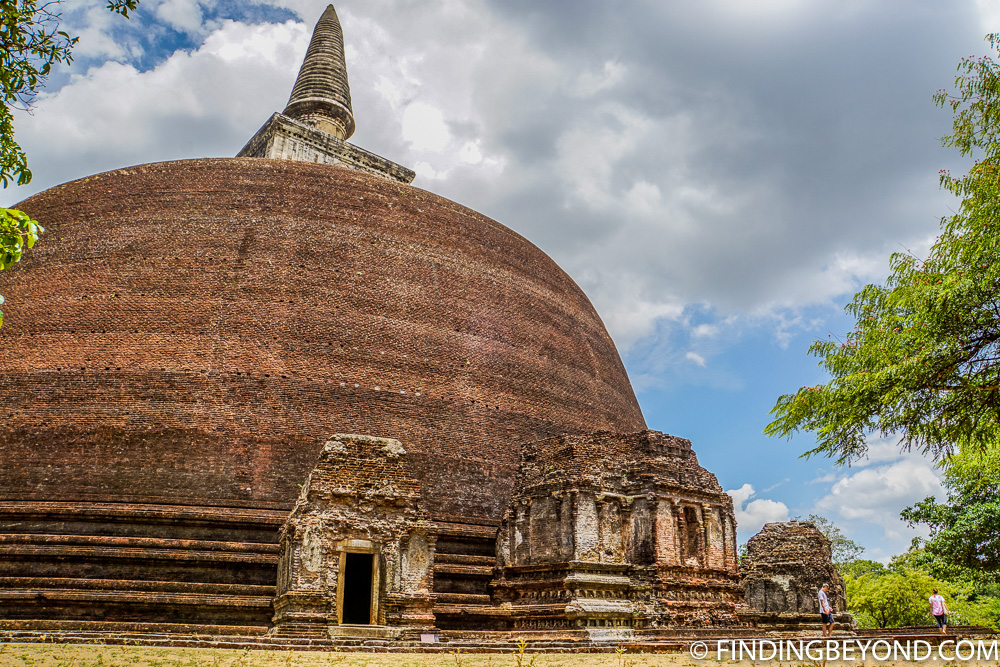 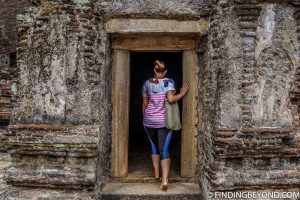 A tall headless Buddha statue can be found inside the towering walls of Lankatilaka. The gothic looking ruin helps to imagine how it must have looked in its cathedral heyday. 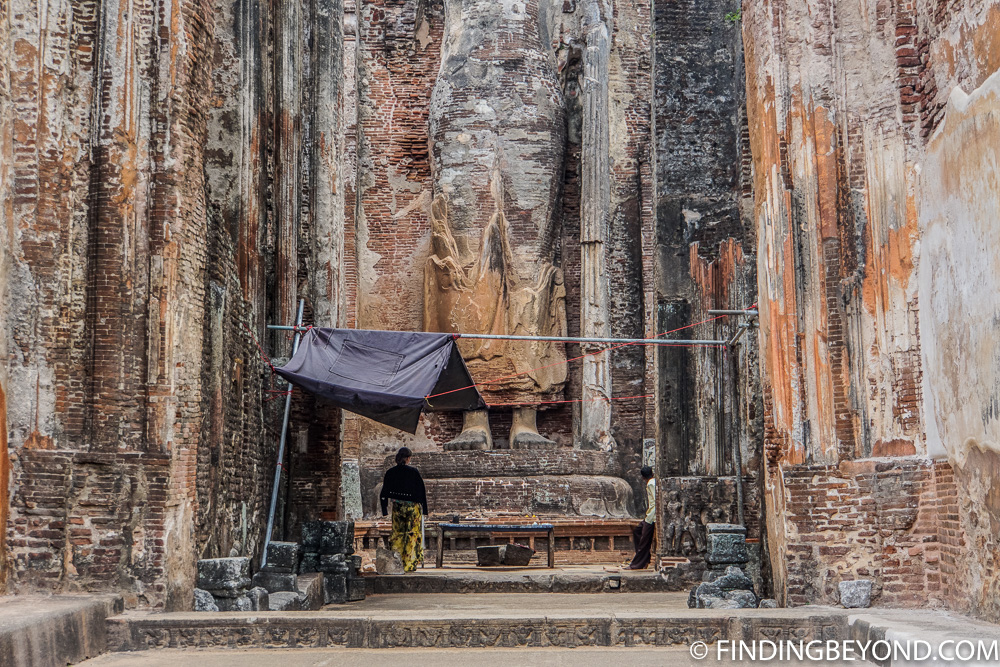 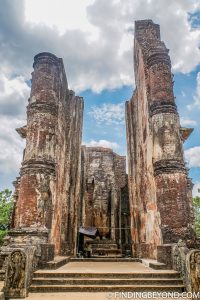 The towering walls of Lankatilaka

We should mention that there was a local guy inside this ruin trying to charge people for going inside. If this happens to you politely ignore his requests for money. He successfully scammed a couple of tourists while we were there. If you have bought a Polonnaruwa ruins ticket then you should not be paying for any of the sites inside.

This beautiful white dagoba is so well preserved that it looks out of place in a ruined city. It was constructed for Subhadra, King Parakramabahu’s Queen and it’s present name means ‘milk white’. When archaeologists cleared the area from jungle they found the dome structure’s plaster in perfect white condition. After 700 years! Thumbs up to the ancient plasterers!  We loved the contrasting white paintwork against the red and brown brick entrances. 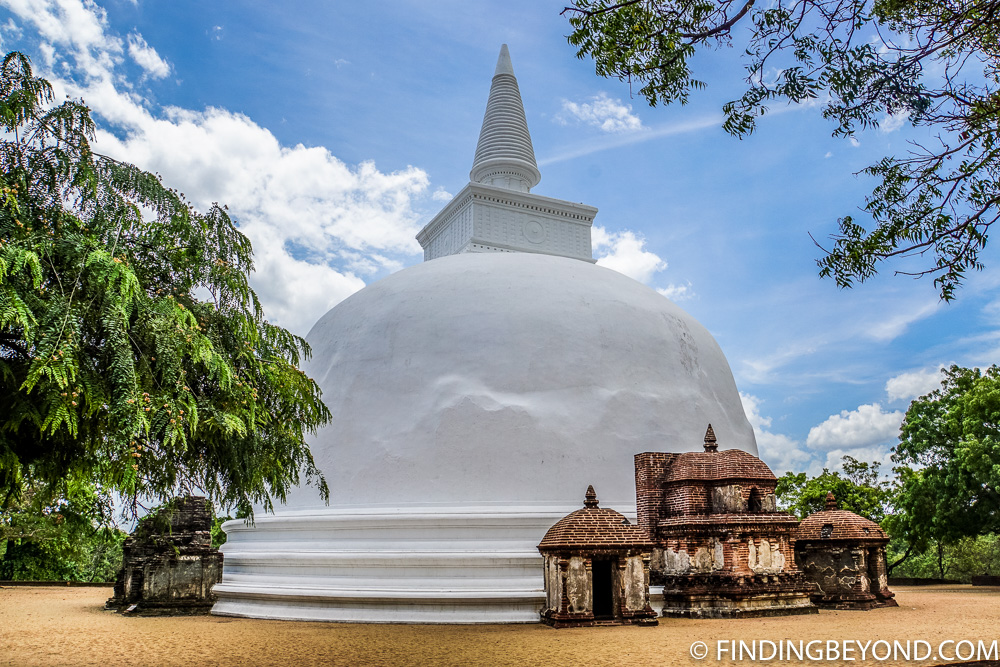 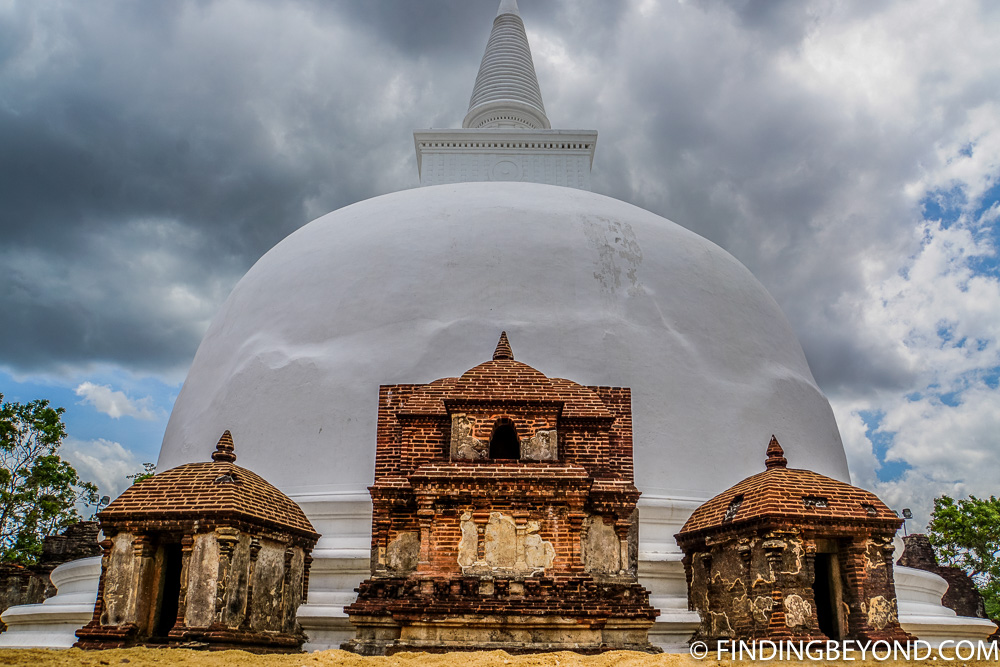 These large Buddha images carved into one long slab of granite are some of the best Sinhalese rock carvings in Sri Lanka. There are four images in total in various positions with the largest being reclining. Today they are housed under a large iron roof for protection from the weather but at one time each had their own separate enclosure. There were a number of local Buddhists here paying their respects by praying and leaving offerings. 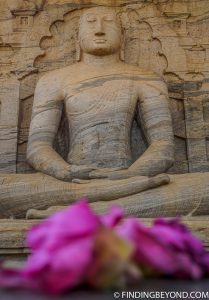 One of the carved Buddha images

So if you’ve managed to make it all the way around those nine Polonnaruwa ruins then you deserve a refreshment! Don’t visit the ancient city without trying an ice cooled coconut from one of the many vendors around the site. We saved ours until the end of the day and it was well worth the wait. 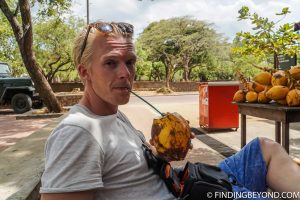 Me enjoying my ice cooled coconut