There can’t be too many places in the world where you can be within walking distance of two breathtaking beaches. Well, we found two Sri Lanka beach resorts which tick that box! On the less developed East coast are Kalkudah beach and Pasikuda beach. Two spectacular back to back stretches of sand that we found so hard to leave behind. 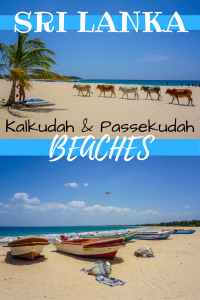 We had spent the previous few days in Arugam Bay, another beach which we thought would be hard to beat. Kalkudah and Pasikuda beach didn’t have the same traveller vibe as Arugam Bay. However, they both trumped the bay by their natural beauty.

Both the golden Kalkudah and Pasikuda beaches might be impressive but they certainly have their differences. Quite contrasting in fact. It’s important to remember that both these beaches had been left behind in Sri Lanka’s fast growing tourism industry. Not only was the area affected by the recent civil war, it was also destroyed by the 2004 tsunami. There is today still dozens of empty houses and land left to ruin. On top of that, it’s on the other side of the island to the capital and it’s international airport. 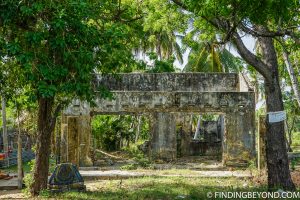 If it’s natural beauty that you look for in your beaches then Kalkudah beach is for you. It has dazzling, never ending soft sands. The beach was wide and went on and on as far as we could see. But not only was it beautiful, there was also hardly anybody there!

The main path to the beach has two small resorts either side. But those were the only accommodation situated directly on the beach. The rest of the endless golden curve is just sea, sand and palm trees. A sight that’s becoming more and more rare to find these days. 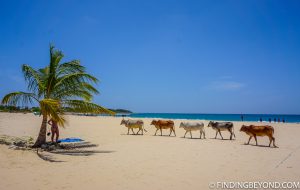 On many visits to Kalkudah beach, we were almost the only people there. Aside from a group of local fishermen pushing their boats out to sea and a small heard of cows that regularly patrol the beach. It’s hard to believe that pre-tsunami, Kalkudah beach was lined with tourist accommodation

In total contrast to Kalkudah beach is Pasikuda beach. Again it’s another glorious stretch of sand. A picture perfect horseshoe bay with sparkling shallow waters. But it’s perfect appearance and safe swimming appeal is why the government has chosen it for mass development. 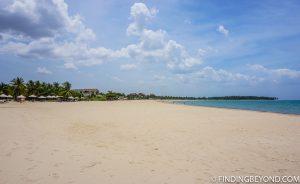 A government-driven ‘Special Economic Zone’ is currently being built on Pasikuda beach which includes 14 luxury hotels. We’d read that construction over the past few years had turned the beach into a building site. But when we were there it seemed that most of the beachside development had been completed.  There were a couple of hotels still in the building phase but this did not spoil the peace. 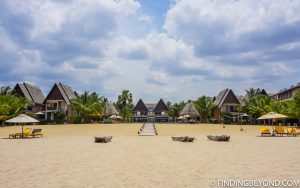 One of the beach resorts on Pasikuda beach

It was a shame to see such large resorts lining the entire beach as we could only imagine how even more beautiful it would have been without them. But they’d been tastefully designed and must be excellent places to stay if you have the budget. Even with all the accommodation options available, it was again very quiet due to still being early days. 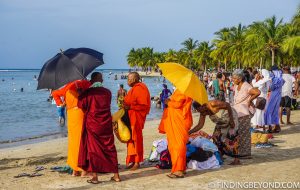 Locals on the Eastern end of Pasikuda beach.

However, the east end of the Pasikuda beach is an area popular with Sri Lankan Sinhalese tourists so can get very busy. Coach loads arrive in the afternoons for swimming in the shallow waters, games on the beach and gossip over an ice cream.

Our Kalkudah and Pasikuda Beach Accommodation

If like us, you’re on a budget and cannot afford the luxury beachside resorts, don’t worry because there are a selection of cheap guesthouses along the main Kalkudah-Valaichchenai road. After doing a bit of research we stayed at Nandawanam Guest House. A clean and spacious guesthouse with clean rooms, huge balconies, lovely grounds, friendly staff and a ten-minute walk to both Kalkudah and Pasikuda beach. 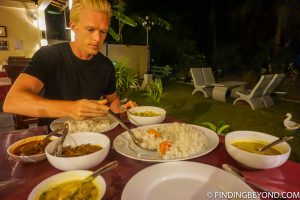 Many vegetable curries for dinner!

Aside from a couple near to Pasokuda beach, there are no restaurants in the area. So we were also pleased by the reasonably priced and delicious food served in the guest house restaurant. We recommend their big portion vegetable curries! And just outside the guesthouse were a small number of local food shacks selling kottu and other snacks. These came in handy at lunchtimes. Our air conditioned room came in at around £15 per night.

For more awesome accommodation options in the area click here!

Getting to Kalkudah and Pasikuda Beach

To get to both Kalkudah and Pasikuda beach via public transport, there are regular buses from the main Batticaloa bus station. Batticaloa can be reached by bus or train from many Sri Lankan towns and cities such as Colombo, Kandy or even Arugam Bay as we did. 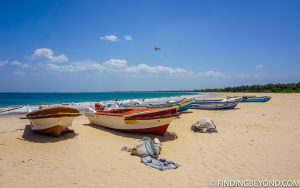 The bus journey from Batticaloa takes around 30 minutes but most buses do not stop at either Kalkudah or Pasikuda beach. Most finish at a small town, about 2KMs away, called Valaichchenai. From Valaichchenai you can get a tuk-tuk to your chosen beach accommodation.