Things to do in Arugam Bay Beach - Sri Lanka

Five hours after leaving Ella in Sri Lanka’s highlands, we arrived at Arugam Bay beach. The bay is the most popular of the Sri Lanka east coast beaches beach. It took three uncomfortable buses to get here. But as the bus was driving through the town’s main road, which runs parallel to the moon shaped golden bay, we could already see it was worth it. We were keen to explore and find things to do in Arugam Bay beach! 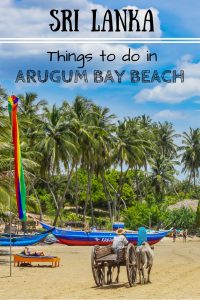 Things to do in Arugam Bay Beach

Arugam Bay beach has the kind of mellow vibe that we often look for in the beach towns we choose to visit. Apparently, the more developed and brash west coast beach resorts are the polar opposite to hammock swinging Arugam Bay. Because the population is only a few hundred, there seemed to be more tourists in town than locals. But this did not spoil the town’s laid back vibe as Arugam Bay beach had clearly cast it’s chilled out spell onto everyone.

Be an Arugam Bay Beach Bum

The main reason anyone visits Arugam Bay is for its lovely sunny beach. It arches around the bay for a few kilometres which allow for long barefoot walks in the sand. Dotted along the beach are a selection of low-key restaurants and bars offering cold refreshments and lunches by day. Barbequed seafood by night! 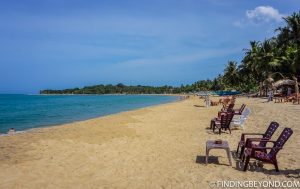 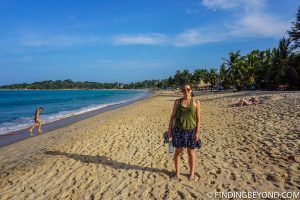 Shelley on our arrival to Arugam Bay beach

Being on the remote east coast, Arugam Bay beach still hasn’t lost its traditional fishing industry charm. Many of the west coast beaches have forced local fisherman off the beach to make room for lush resorts. But thankfully that isn’t the case here. 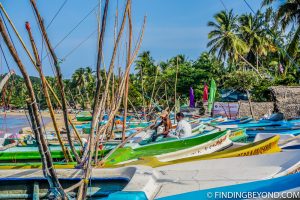 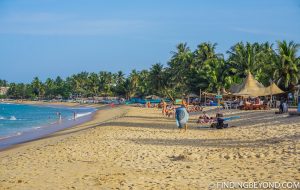 In the middle of the bay are dozens of colourful beached fishing boats. They’re still used daily to catch enough fish to sell onto the area’s many fish restaurants and markets. If you get up early enough, around 4 am, you can see the fishermen start their day at sea as they push their boats into the waves and float off into the distance.

One of the most active things to do in Arugam Bay beach is surfing. The water sport is another massive Arugam Bay draw card. In the high season (June to October) the bay offers what most say is Sri Lanka’s best surfing spot. It attracts amateur and professional surfers from around the world. Because of this, there are loads of surf shops in the area offering surfboard hire, surf lessons and surf clothing. 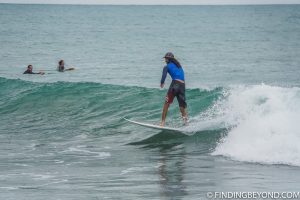 When we were there, it seemed to be the perfect surf beach for beginners. The beach even had a surf point that’s been fondly named Baby Point. The continuous small waves, close to the shore, were the perfect size for adult and child beginners to ride their first successful wave. 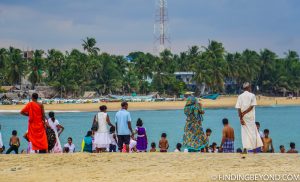 Further around the beach to the south, where the beach straightens and seems to go on forever, are the larger surfing breaks. Here you can watch more advanced surfers show off their moves.

Now this is a must of you’re looking for things to do in Arugam Bay. In Sri Lanka, you are never far away from an opportunity to spot the country’s amazing and diverse wildlife. While you can visit the many much-visited national parks by jeep, Arugam Bay beach offers something different. In the neighbouring town of Pottuvil, just 4KM away, you’ll find Pottuvil Lagoon.


Pottuvil Lagoon is a wetland area which you can explore by small motorless rafts. Tours from Arugam Bay beach leave either early in the morning at 5:30 am or late afternoon at 3;30 pm. Both times are best in the day for spotting the lagoon’s abundance of wildlife. Possible wildlife spotting includes elephants, crocodiles, monitor lizards, water buffalo and heaps of birdlife. 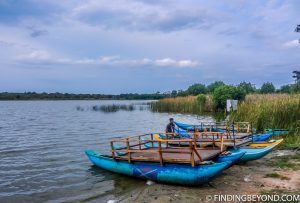 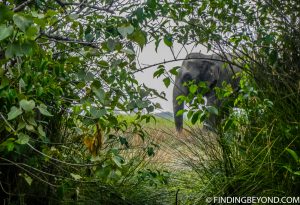 One of a few elephants at Pottuvil Lagoon

For just 5000 rupees (£25) for the two of us, which included a return tuk-tuk, we peacefully floated on a homemade raft constructed from old canoes and wooden planks, through this remote and tranquil wetland area. The only sounds to be heard were birdcall and the light splashes of water from the two guides rowing us to prime wildlife spotting areas.

We successfully spotted our first Sri Lankan wild elephants! But at one point got a little too close as we tried to make it back to shore in the middle of a huge storm! Read about that here.

Elephant Rock is a sea facing rock about 3KM south of Arugam Bay beach. It’s a popular surfing spot but also a perfect location to watch the sun rise or set. We also heard you can see wild elephants from the rock roaming further inland! You can jump in a tuk-tuk for a 15-minute ride or walk the 3KM from the southern end of Arugam Bay beach. 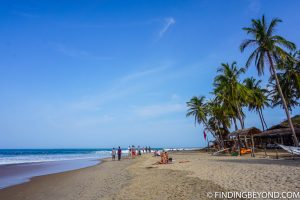 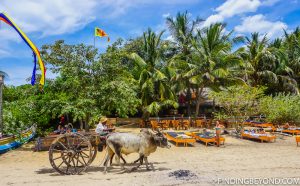 Traditional buffalo and cart still used in the area

We, unfortunately, did not get a chance to visit the rock. On the afternoon we planned to walk there, a huge storm rolled in, so we had to turn back to find cover. It was a good thing we did because it was a big one!

The main road running behind Arugam Bay beach is the best place to seek a fish dinner caught that very same day. We lost count of the amount of glowing fish filled BBQ’s lined up on the street side. This filled the air with appetising seafood scented smoke. Prices varied from place to place. However, the average was around 800 (£4) baht for a main of fish with either rice, chips or salad. 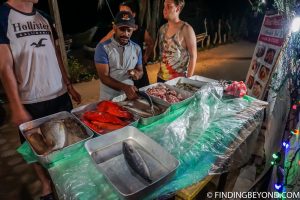 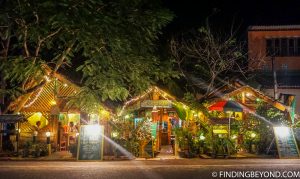 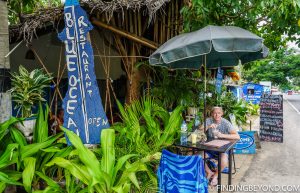 Me outside Blue Ocean restaurant. Another favourite eatery.

Our favourite fish restaurant was a little place called Rifky on a side street at the southern end of the strip. The family run shack of a restaurant had bags of character. With the husband running front of house, wife in the kitchen and their three cute smiling kids running amok around our feet. For 500 (£2.50) baht each, we eat some of the best fish we have ever tasted which came with rice and a side of vegetable curry.

We stayed at The Seahorse Inn which is the last guesthouse on the southern end of main street. The southern end of town felt like the main area due to having the highest concentration of restaurants and shops. It’s also closest to the most popular beach spot with the best patch of sand and surfing points. 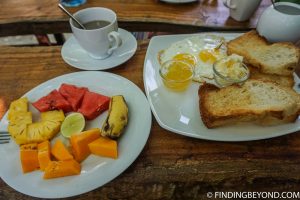 Breakfast at The Seahorse Inn

They had a mix of cheaper fan rooms on the ground floor and more expensive air-con rooms above. We paid around £30 a night for a fan room through AirBnB. We assume from reading online reviews that the air con rooms are better maintained. We, unfortunately, felt our fan room was a little neglected and damp for the price. The online pictures weren’t quite up to date.

The communal restaurant/bar/chill area was great with loads of seating. The restaurant serves decent wood fired pizza’s and they have an extensive drinks menu at the bar. But we found it a bit pricey for our budget. We made good use of the communal space daily by using the free wifi for blogging and photography work.

The staff were really friendly and always helpful when we had questions. They can book any tour or activity that you need including our lagoon trip!

Getting in and out

Getting in and out can only be done by road as there is no train station or airport nearby. Expensive taxis are always an option but we took three public buses. This took over five hours to reach Arugam Bay beach from Ella. There did not seem to be a single route from Ella. We were told various ways to get there so just jumped on the first bus we saw from Ella Junction. We stated our destination and the friendly locals told us when to get off and what bus to catch next.

Thankfully there was a direct bus to our next destination of Batticaloa further up the east coast which took three hours. The main bus station for all destinations to and from Arugam Bay beach is based 3KMs away in Pottuvil.

So there are more things to do in Arugam Bay beach aside from lazy days in the sun. No doubt you’ll spend plenty of time on the sand with a beer in hand as we did but there are big waves, long walks, lagoons and elephants waiting to be explored.