We’d read that the train from Kandy to Ella is one of the world’s most beautiful. The Kandy to Ella train slowly rattles through lush green jungle, soaring mountains, terraced tea plantations, rural villages and working farms. We planned our very rough idea of a route around the island with this Sri Lanka railway journey in mind as there was no way we were going to miss out. 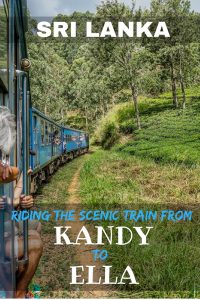 To Reserve a Seat, Book Far in Advance

Back in 2013, reserved seats for the train from Kandy to Ella often sold out 10 days before departure. These days you need to be super organised as tickets can sell out 45 days in advance! Another indication of Sri Lanka’s growing tourism. We didn’t find this out until we reached Kandy train station on our first day in the city. So with a plan to stay just two nights, there was no chance of a reserved seat on our much awaited Kandy to Ella train trip. 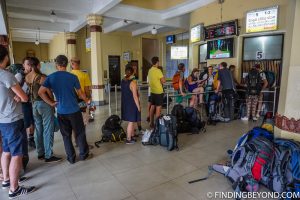 Shelley in the Que at Kandy station

Instead, Sri Lanka railway have unreserved carriages for the many tourists and locals in the same situation. Tickets for unreserved carriages can be brought at Kandy train station on the day of departure only. We heard that they never sell out. They just keep selling them and squeeze as many people on board as they can. Seats are not guaranteed and if your station is not at the start of the route then standing is the most likely scenario. With the train from Kandy to Ella being six hours and Kandy train station not being the starting point of the route, we weren’t too thrilled to hear that!

The Train from Kandy to Ella has Three Classes

Sri Lanka railway have made it simple by naming them 1st, 2nd and 3rd. 1st class is run by a private company called ExpoRail and offer air-conditioned carriages with observational windows. That’s all great but we’re all about open windows and doorways so you can feel the country you’re travelling through. Neither 2nd or 3rd classes offer air conditioning which allows for those preferred open windows and doors. 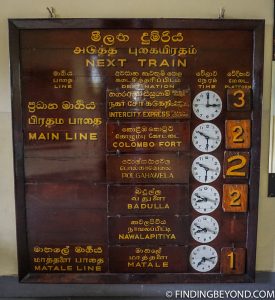 We loved this old school departure board

On the day we travelled the Sri Lanka railway prices for a reserved seat on the train from Kandy to Ella were:

So we got up early to get to Kandy train station for 7:30am. We wanted plenty of time before the 8:45am Kandy to Ella train departure. As our tuk-tuk dropped us off we could see ten or so other travellers already at the 2nd class unreserved ticket counter (number 5). All of them eagerly waiting for the counter opening time of 8am. We joined the back of the que and it wasn’t long before many other travellers arrived behind us.

In the end there must have been around 200 tourists buying the same unreserved tickets for the Kandy to Ella train. It was such a surprise to see so many since we hadn’t seen large numbers while in the city. Where did they all come from! Once we had purchased our tickets, we all lined platform 2 from both sides. We waited for the train to arrive, checking out the competition for seats on the other side. 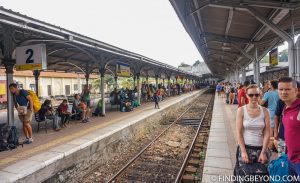 The Kandy to Ella Train Arrival

When the train from Kandy to Ella arrived it was already packed. People squeezed in like sardines and even hanging out of the doorways. We thought that only happened in India! We did not expect that on the Sri Lanka railway. I wish I got a photo but the rush to board did not allow me that time.

Quite a few got off at Kandy which provided just enough room for the 200 of us to squeeze on with our huge backpacks. When I say just enough room, I mean just! It took quite a few minutes before everyone was on. At one point it looked like several travellers were not going to fit onboard but they somehow got on. No doubt with some needed help from the friendly locals. They’ll always find a way!

We were lucky to have a doorway of the train stop right where we were standing on the platform. So we had no issue boarding. We were able to put our backpacks on the limited luggage racks but there were no seats. They were all taken by the many locals continuing their Sri Lanka railway journey from Kandy. 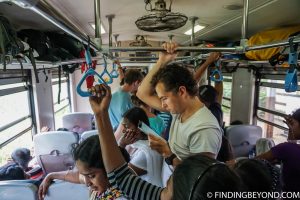 We were pleased to get on board but frustrated that we did not have a seat. There was no possibly of taking any scenery pictures while standing. The windows are too low and other passengers were in the way. The thought of missing out on the opportunity to take photos of views from the Kandy to Ella train was a bit upsetting. Don’t forget it’s one of the world’s most scenic!

The Journey from Kandy to Ella

The train pulled out of Kandy train station and for the next few hours we were standing on a bumpy, swaying train as busy as a London commuter underground carriage. However the overcrowding didn’t bother us. There were so many other travellers in the same situation. We all just laughed and joked about it. When you are commuting to somewhere exciting like Ella in Sri Lanka, and not the office, it’s all good. 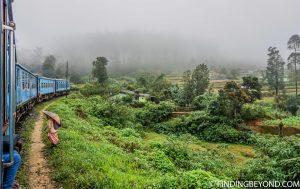 The smiling locals and cute inquisitive kids onboard helped to past the time. And let’s not forget about the scenery. I may not have been able to take any photos but we could still see the views. Partially. They were spectacular. Even on a cloudy day like we had. 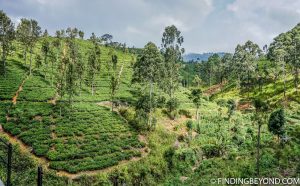 Occasionally the tourists standing by the open doorways allowed me to stand in their place for a while to take a few photos. This I was very grateful for. It was hard work standing in the doorway taking photos while trying not to get thrown off by the jerking train. But I really enjoyed it and was pleased to get at least a few shots.

We were extremely jealous of the tourists sitting on the edge of the doorway with their legs dangling. They had uninterrupted views and the wind in their hair. Now that’s the way travel on the Kandy to Ella train!

As we travelled through the highest altitude, we really felt like we were in the clouds. A dense white fog filled the mountains and at points we could see no further than just a few meters. Not the best weather conditions for a train journey of this reputation but it was very atmospheric and beautiful in it’s own way. Luckily the thick fog only lasted around 30 minutes so it wasn’t long before the green tea plantations and mountainous scenery was visible again. 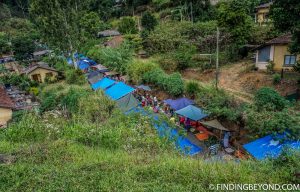 As we passed through the hill country, tourists and locals were continuously leaving and boarding the train. With the emptying carriages came available seats so for the last 90 minutes we snatched a pair of seats by the window. It was a relief to be able to rest our aching legs after standing in one position for over four hours. But even then we shared the two seats with another child traveller. Sharing is caring! 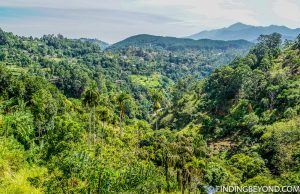 Even with the unreserved situation, overcrowding and at times poor visibility, we can absolutely see why the train from Kandy to Ella is known as one of the world’s most beautiful rail journeys. It was the perfect introduction to the highlands which we found to be one of Sri Lanka’s most gorgeous regions.

2 thoughts on "Riding the Scenic Kandy to Ella Train – Unreserved"