Top 5 Things to do in Kandy City in One Day

After a couple of nights acclimatising in Negombo, we were ready to catch the Negombo to Kandy bus and explore the real Sri Lanka. Negombo was fine but there wasn’t much in the way of Sri Lankan culture, sights, landscape and proper Sri Lankan food. We had just one day planned in Kandy city due to a fairly tight schedule around the island. So after a day walking around the sights we can share the top 5 things to do in Kandy city in one day. 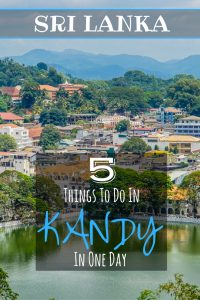 Our 4-hour bus journey from Negombo to Kandy wasn’t too bad. Just the usual bumpy roads and overcrowding inside. We thankfully couldn’t see out of the driver’s window which is always a good thing. Bus drivers in Asia overtake a lot of other vehicles. Sometimes at high speeds towards oncoming traffic and even around blind corners. So it’s best not being able to see the numerous near collisions and just hold on tight while they get on with it. 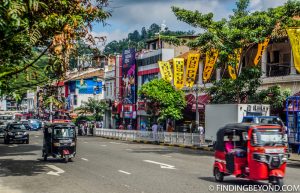 One of Kandy’s main streets 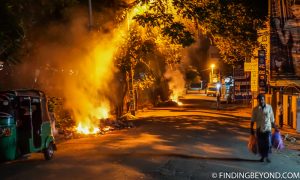 When we arrived in Kandy city we could immediately see why it’s Sri Lanka’s second city. It’s a busy, bustling and noisy place. Traffic was heavy with horns going off at every second. There were plenty of traders on the roadsides and pedestrians dodging vehicles as they walk in all directions. It seemed like an unpractical place to have a busy bus stop! However overlooking all this madness are the picturesque surrounding mountains and lush green jungle. Such a surreal setting for a city of its size and character.

As soon as we stepped off our Negombo to Kandy bus we were approached by a tuk-tuk driver offering to drive us to our accommodation. We stayed at Sakura Hill Kandy 71, a small homestay guesthouse with just 3 rooms. It’s situated up one of the many steep hillside roads from the city centre. A tuk-tuk was definitely needed to carry our heavy backpacks.

Sakura Hill Kandy 71 was a pleasant place to stay. We had a large room with shared balcony overlooking some of the greenery. With it being a 10-minute walk away from the loud city centre we found it to be a peaceful location. At night we could hear fruit bats screeching in the trees and even saw playful monkeys nearby.

Top 5 Things to do in Kandy City

So let’s begin our top 5 things to do in Kandy in one day. Kandy is not a large city. We managed to easily walk to all of the following sights without needing a tuk-tuk or guide. Just make sure to wear some comfortable footwear.

We started our only full day in the city by walking to Kandy Lake which is situated right in the centre. The lake looked well maintained with a number of flower filled floating islands and a footpath which runs around its entire edge. There were plenty of local young loved up couples walking the lake path hand in hand. It’s a popular place to enjoy the city centre’s only peaceful spot. 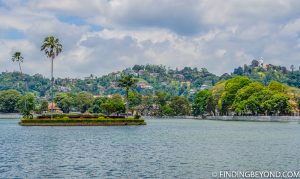 The lake is actually artificial and was created in 1807 by Sri Wickrama Rajasinha, the last ruler of the kingdom of Kandy. We walked around the whole lake which doesn’t take much more than an hour. It’s possible to spot large lizards, monkeys and many birdlife as we did.

To the south of the lake, up the winding hillside roads is Kandy viewpoint. It’s not the easiest to find as there are no signposts so you’ll need a little help from a few friendly locals. There’s no viewing platform as such, more of a clearing on the roadside which allows for great views of the city, lake and mountains beyond. On a sunny day, you must add it to your list of things to do in Kandy.

3 – Temple of the Sacred Tooth

Kandy city is famed for its many sacred Buddhist sites and the Temple of the Sacred Tooth is a highlight. The temple is most likely to be at the top of everyone’s list of things to do in Kandy. The golden-roofed temple houses Sri Lanka’s most important Buddhist relic – a tooth of the Buddha! 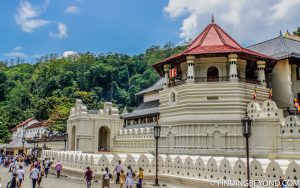 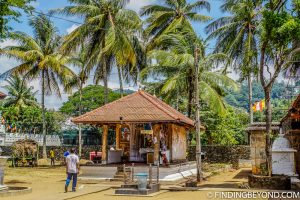 Part of the temple complex

It’s just north of the lake with its entrance next to the lake path. We paid 1000 rupees (£5) each and entered after taking our shoes off and covering our shoulders and legs. I was wearing shorts above the knee so had to hire a fetching ladies floral sarong from a nearby stall. I tried to pull it off like a 1998 David Beckham but I guess I didn’t, judging from the giggles I got from a few local women. 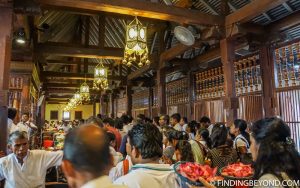 Buddhists queueing to give their offerings

There must have been 1000s of devoted Buddhists inside the temple, carrying offerings and making prayers. We lined up with them as we shuffled towards the heavily guarded room housing the tooth. But nobody actually gets to see it since it’s kept in a gold casket containing a series of six more caskets of diminishing size. 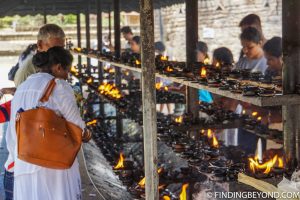 It was still impressive to see the lavish temple from the inside and witness the devotion of the religion’s followers. The temple complex covers a huge area with loads more to see. Including a number of shrines, halls, devales and museums.

Clothes, shoes, gifts, fruit, vegetables and more can all be bought from Kandy city’s bustling central market. The market is mostly housed inside a two storey building with an immaculately kept courtyard garden. 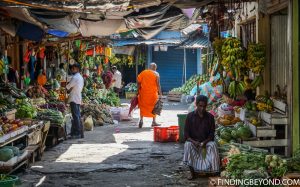 We are able to casually stroll through in the mid-afternoon without being bothered by too many stall holders. Quite unusual for an Asian market! It was obviously a market for locals rather than tourists which is always great to see. We assumed rush hour must be in the early morning as it was very calm at the time we were there. The rest of the colourful market spills into the neighbouring tarpaulin covered outside space.

After a long day seeing the many things to do in Kandy city, building up our appetites by trekking in the Sri Lankan heat, we eat at the Muslim Hotel. A fantastic large old eatery selling local dishes at some of the cheapest prices we found in Sri Lanka. We love these type of eateries; busy, atmospheric but rough around the edges and showing it’s age. 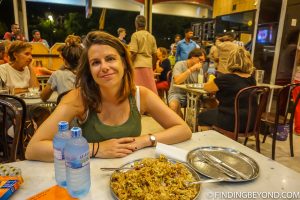 Shelley with a large chicken kottu 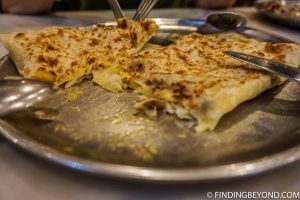 It’s always been a popular spot for Kandy locals but now large numbers of tourists join them. Enjoy samosas, curries and huge portions of Kottu (rotti chopped and fried with meat and vegetables) which are legendary throughout town.

Getting from Negombo to Kandy

To get from Negombo to Kandy city we had to take our first Sri Lankan public bus service. Taking public transport in countries like Sri Lanka is something everyone should experience. It may not always be the most comfortable way to travel but it’s a time to mix with locals, pass waving families in rural villages and see the countryside views through your open window (if you’re lucky).

It was our first Sri Lankan bus journey so we were pleased to find direct buses from Negombo to Kandy. No changes needed! Changes are usually where things can go wrong. We should know after taking many public buses in neighbouring India. 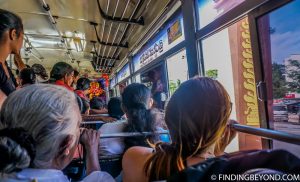 Shelley looking out of her window seat on the crowded bus

Negombo bus station was a short 200 rupee tuk-tuk ride away from our accommodation near the beach. Once dropped off we were relieved to find an organised bus station with actual platforms and destination signs. In Asia, that’s not always the case. We’ve arrived at huge dusty car parks before with dozens of buses, no ticket office, no platforms and no signage. Leaving us clueless Brits in the middle of the chaos scratching our heads.

Our number 01 Negombo to Kandy bus left Negombo at 10 am and we arrived in Kandy at 2 pm. With Negombo being the start of the route, we managed to get ourselves a window seat. We glad we did as the bus was a sweatbox when stationary but once moving we had the cooling wind blowing through our open window.

There are also many popular Kandy sights outside of the city

Including a Ceylon Tea museum, botanical garden and an elephant sanctuary but transport will be needed to visit them. If you did hire transport for the day then you could see more than our top 5 things to do in Kandy city. But if you are on a budget and like to explore on foot then do check out our recommendations.