Things to do in Negombo Beach? Don't Expect Much

You probably came across this post because you’re looking for things to do in Negombo beach. Or maybe you’re deciding weather to visit the resort since it’s so close to the international airport. We spent a couple of nights there after landing in Sri Lanka so keep reading for our honest account.

It’s always fun to have a good old argument with the first local you interact with after entering a new country. Yeah, good times! I hope you can hear the sarcasm in my voice. Having not travelled for a while, we didn’t think to give the full address of our Negombo beach accommodation to the taxi driver. He’d already agreed to drive us there for 800 rupees but once we were on our way and he found our guesthouse to be slightly out of the centre, he then suddenly bumped the price up to 1200 rupees. 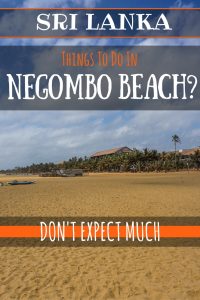 We know an extra 400 rupees isn’t much when converted to GBP but we knew it was a scam. He most likely played this game with many other unsuspecting tourists. We feel it’s important to stand your ground on occasions like this. Because if nobody did and everyone agreed to pay whatever costs are quoted, then they’ll keep on doing it. In the long run this will raise prices for locals too where the majority cannot afford it.

Anyway, after a bit of back and forth we agreed to compromise at 1000R (£5). Still expensive considering he was not a licensed taxi. Tuk Tuks doing the same 15 minute journey to Negombo beach would charge around 600R (£3). And a licensed air conditioned taxi would a maximum of 1500R (£7.50). 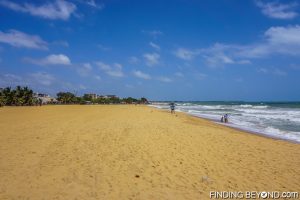 Things to do in Negombo Beach? There’s Not a Lot to Recommend

We’d read that Negombo isn’t real Sri Lanka. That it’s just a transit town that tourists stay at for a night or two after arriving in Sri Lanka. A good place to acclimatise to the country before heading off for more interesting cities, cultural sights and beaches. We understood why as Negombo is nothing more than a strip of tourist accommodation, restaurants, bars and shops, which runs along side the town’s wide but somewhat polluted beach. If you’re looking for things to do in Negombo Beach then you may struggle as we did. 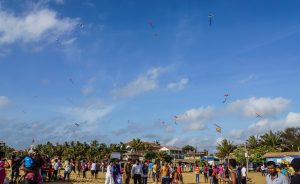 Kites on the beach

The beach makes for a pleasant enough walk but is not the sort of beach you’d want to stay at for long. There are far better beaches dotted all over Sri Lanka’s coastline. Some which we hope to be visiting. However, Negombo beach is popular with Sri Lankan tourists. On the day we took a stroll we came across hundreds of locals enjoying their time on the sand. Many of them taking advantage of the strong sea winds by filling the skies with home made kites. It was an awesome sight! 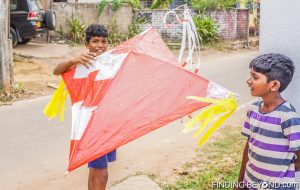 Local kids with their homemade kite

Real Sri Lankan Food in Negombo is Difficult to Find.

Most of the restaurants all serve very similar menus which consist of mostly boring western dishes and some token Sri Lankan curries. The prices at each establishment are also very similar with most mains coming in at around 1000 rupees (£5). Pretty cheap you might say but not by Sri Lankan standards.

If you want to eat like a local then we’d recommend Mr Burger. Burger by name but not by menu. Instead the very friendly and chatty owner, who has family living in Luton, serves up just two traditional Sri Lankan dishes. The first being Kottu, which consists of shredded roti, egg, vegetables, chicken or beef and stir fried together. The second being Hoppers which consists of a fried egg inside a bowl made from coconut milk and rice flour. The edible bowl was sweet from the coconut which really worked when eaten with the egg. Delicious! The whole meal for both of us and a local ginger beer came to just over 500R (£2.50)! If we were to create a list of things to do in Negombo beach then Mr Burger would be on it. 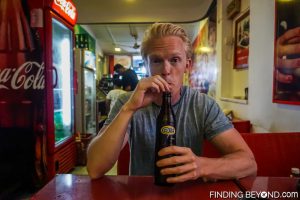 Me trying a local Ginger Beer 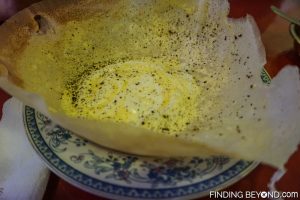 Other Restaurants and Cafes we Eat/Drank at Include

Honky Tonky Two, a touristy restaurant but slightly cheaper than all the rest. Cafe J, a modern cafe which could not be further from traditional Sri Lanka but serves those with a sweet tooth ice cream, smoothies, shakes and cakes plus a small selection of very cheap savoury pastries and sandwiches. And Dolce Vita for a hit of real coffee in the form of most western favourites including Latte, Cappuccino, Mocha and Americano! Being a coffee lover I enjoyed a foamy Latte and Shelley opted for a Mocha which came with a mountain of whipped cream on top! I may have eaten a lot of the cream for her 🙂

We Stayed at D-Villa Negombo

A modern guesthouse which had great reviews online. It wasn’t anything special but it did the job for the budget we had of 3000R (£15) a night. This bought us a fan room which we instantly regretted for our first two nights in a country that consistently reaches 30c everyday. Looking back, we maybe should have paid for air conditioning but it’s not a luxury that budget backpackers can regularly afford. We thought we’d go hardcore right from the outset! I’m sure we’ll treat ourselves to air-con soon. 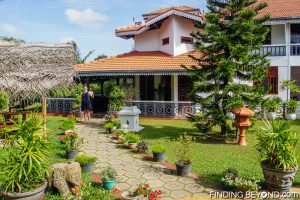 The biggest selling point of D-Villa Negombo was not being greeted by our first cockroach of the trip or finding Sri Lanka’s noisiest room fan. It was the owner who made us feel very welcome and lovingly made us our free breakfast each morning in the spacious garden. Breakfast consisted of tea/coffee, fruit salad, eggs and bread. More than enough to keep us going until lunch. 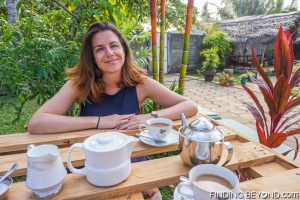 Shelley enjoying tea in the garden of D-Villa Negombo 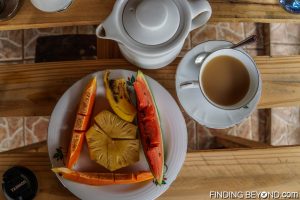 There may not be many things to do in Negombo beach and not be a particularly nice place but after an 11 hour overnight flight, we preferred to realise we need to shower 6 times a day here than in the hectic and in your face capital city of Colombo. Besides, our next stop is Sri Lanka’s second city, Kandy, which we’ll be reaching via the crazy local buses. Wish us luck!

15 thoughts on "Things to do in Negombo Beach? Don’t Expect Much"